The story of the men of the Medical Department that served in the 4th AD is the central theme of this website. Understanding the organization of the medical service within an armored division can help us a lot when we read the stories of these men. It tells us in what part of the whole medical system they served  and the role thay played in it.

Let’s start with the mission statement of the US Army Medical Department for WW2: “To keep the soldier well and able to fight and, if he becomes wounded or sick, to move him back and get him well as soon as possible”. You can see that the preservation of fighting strength for the unit was seen as at least as important as the wellbeing of the individual soldier.

When the US Army started to prepare itself for war, so did the Medical Department. It used the experiences from WWI to develop the plans for WW2.

One of the lessons WW1 had taught the Medical Department was the aim to “bring the doctor to the patient, rather than the patient to the doctor”. Having doctors close to the front helped to save lives (and thus conserve fighting strength).

A balance needed to be found between having doctors close to the front and concentrating medical personnel in larger units, for efficient and effective treatment. The search for the ballance led to the development of the system known as “the Evacuation Chain”. 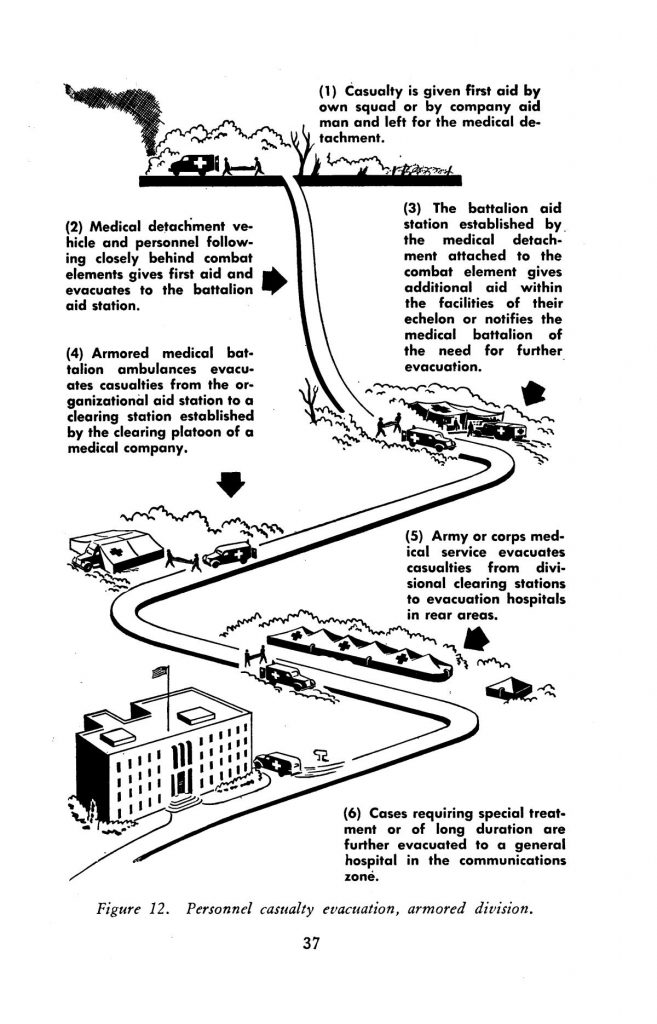 The first goal of this system was to start medical treatment as soon as possible (close to the front). The second goal was to evacuate a wounded soldiers quickly to medical installations that were at a safe(r) distance from the front and that were better equipped to provide the treatment that was needed.

The “Evacuation Chain” was the system that linked the different medical units and installation so that these goals could be accomplished.

The name suggests a linear system, but it was more of a funnel where casualties from many battalions on the frontline would be collected and funneled towards a small number of medical installations.

The links in this “chain” were called “echelons”. The whole chain consisted of five echelons.

A casualty would move up to higher echelons depending on the severity of the wounds he received: the more severe the wounds, the further up in the chain he would need to be evacuated.

For a good visual impression of the Evacuation Chain, I highly recommend reading this article in LIFE magazine, 29th January 1945.

Here I will focus on the first three echelons as they were the echelons that the medical personnel of the 4th AD would deal with during the campaigns of 1944/1945.

With the highly mobile armored divisions, the medical detachments had enough vehicles (mostly ¼-ton trucks/ Jeeps) to attach one vehicle with two aidmen (or rather Surgical Technicians, MOS 861) to each company (for more information on MOS click here: Military Occupational Specialty). They would move with the company and be ready to provide first aid to any casualty and move him to the Battalion Aid Station (or collecting point). 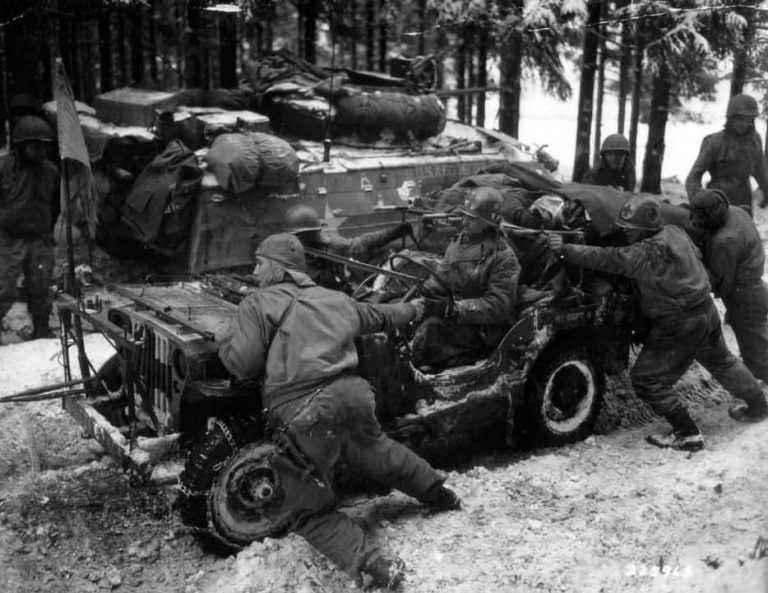 The Battalion Aid Station was usually located a few hundred yards from the front.  Here a casualty would have his first encounter with a doctor. So a Battalion Surgeon was the doctor that was “brought to the patient”.

If possible the casualty would be treated at the Aid Station and then returned to duty. If his wounds were more severe he would be evacuated, as quickly as the situation allowed, to the second echelon.

Within the rapidly advancing units, there was often no time to set up a Battalion Aid Station during combat. A casualty would then be treated “on the go” and left to be collected at a preplanned collecting point.

The terms Battalions Surgeon and Battalion Aid Station might give the impression of a well equipped and located medical installation manned by a highly experienced surgeon. In reality, the Aid Station was often located in a ditch or the ruins of a house, and Battalion Surgeons were mostly doctors fresh out of med school with one year of internships. They were however the vital link in the entire chain, performing an extremely stressful job under the most difficult of circumstances having only the bare minimum of equipment at their disposal.

The second echelon in the Chain of Evacuation included the personnel of the division’s medical battalion. The 4th Armored Division had the 46th Armored Medical Battalion (46th AMB) for its second echelon service. 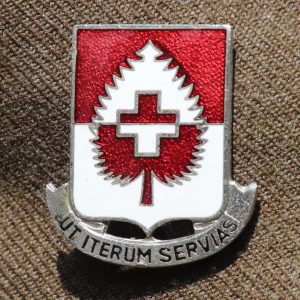 The medical companies had platoons for collecting casualties at all the Battalion Aid Stations (or collecting points) within the combat command. They would evacuate to their own treatment facility called a Clearing Station. A Clearing Station was better equiped to treat wounded men. It would be located a few miles behind the front. Just to give you a rough idea, a Clearing Station can loosely be compared to a modern Emergency Room. 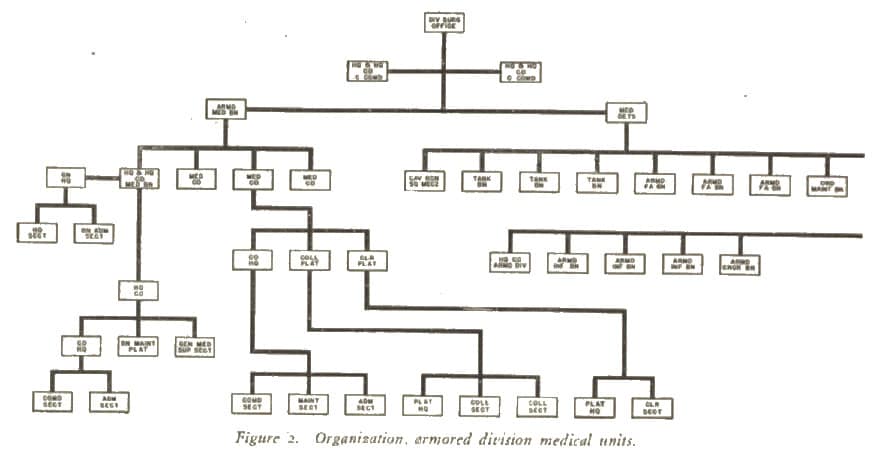 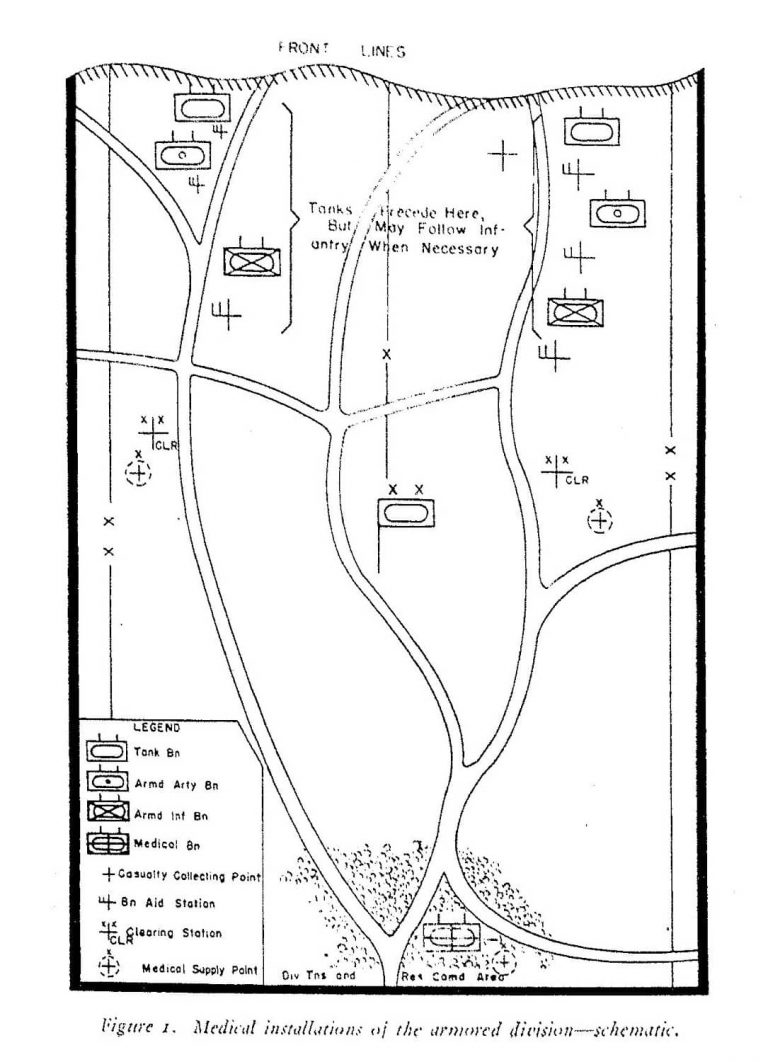 This video shows the medical service in Normandy. Starting at 8:36 min, it shows us the links in the Evacuation Chain.

The Reserve Medical Company (in the 4th AD this was Company C most of the time) had a multitude of jobs to do:  it would provide second echelon medical service to all the units attached to the Reserve Command and Division Trains (so all the units not directly on the frontline).

It treated casualties that were not wounded severely enough that further evacuation was necessary but who still needed additional days of treatment before they could return to duty. The Clearing Stations of the Medical Companies attached to the combat commands would send these men to the Clearing Station of the Reserve Medical Company, so they would have enough room to admit new casualties.

The Reserve Medical Company also served as “Auxiliary Treatment Center”. This center was set up by the Division Neuropsychiatrist (Major Earl Mericle). Here all Combat Exhaustion/ Fatigue casualties of the division were given treatment. The aim was to return to the front as many of these patients as possible after a short treatment. I have plans to write at least one blog in the future on the treatment of Combat Exhaustion as it is a fascinating story to tell you.

Besides the personnel in the medical detachments and the medical battalion, the medical personnel of the 4th AD included several medical staff personnel. These included the Combat Command Surgeons and their staff and the Division Surgeon and his staff. These medical staff directed and assisted the medical units within the division with regards to administration, supply, training, etc. In the Table of Organization and Equipment (TO&E) of an armored division, the Reserve Command had no staff surgeon. When the 4th AD used the Reserve Command as third Combat Command (then called CCR), it had to send medical personnel there on temporary duty (TD) as Acting Combat Command Surgeon. This is reflected in the unit’s personnel document.

For more information on the first and second echelon medical service within the 4th AD click on: Evacuation policies, 1944.pdf within the 4th Armored Division dated July 1944.

So in the case of the 4thAD, the evacuation of the Clearing Stations was done by ambulance companies of Patton’s Third Army. In the stories, we find these units mentioned, such as the 589th Ambulance Company and the 431st Medical Collecting Company.

To be ready to transport the wounded from the Clearing Stations the moment they could be evacuated, the men of these ambulance companies and their vehicles would be located directly at the Clearing Stations before the start of combat operations. We can see this in the timeline documents of the medical companies.  They show up as “attached for administration and rations only”. This means they would eat in the mess of the medical company. For the period of “attachment”, the mess would receive additional rations to be able to feed their “guests”.

Depending on the severity of the wounds he had received a casualty would be evacuated to an Evacuation Hospital if possible or to a (platoon of a) Field Hospital if necessary (as they would treat the most severe wounds, like chest and head wounds).

This film shows us an Evacuation Hospital (128th Evac Hospital) in operation.

And this film is about Field Hospitals. 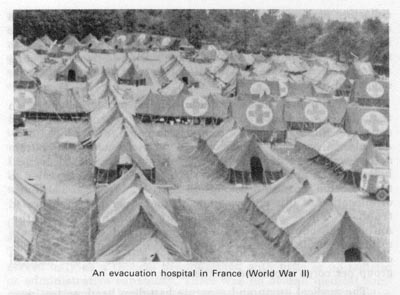 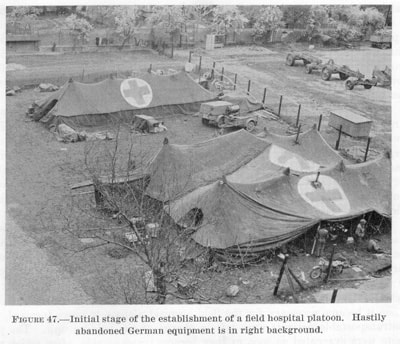 The plan for the Chain of Evacuation stated that an Evacuation Hospital would be located “several miles behind the front, out of reach of enemy artillery”. On paper, this worked well. A casualty would only have to be evacuated a couple of miles from the front to reach a hospital. Within the movement from the front to the hospital he would be treated by a multitude of doctors (the Battalion Surgeon and the doctors at the Clearing Station) to make sure he would arrive at the hospital in the best possible condition under the circumstances.

Unfortunately, the plan did not anticipate the incredible speed of advance made by units like the 4th AD. This created a “weakest link” in the Evacuation Chain that sometimes jeopardized the entire system (for more information on this click here: Fixing the weakest link in the chain).

If you are interested in the reported number of casualties of the 4th AD treated by their medics, click here: Timeline Casualties and Diseases and battle casualties, 1944, 24 January 1945.pdf.

One final note. The men of the Medical Department of the 4th AD did not only treat casualties. They very often became casualties themselves! Names on lists do not tell the whole story on this, but they might give us a glimpse into the service and sacrifice of these men.

If you are interested in this, click here: Casualties and replacements, report 31, December 1944, and look at the personnel documents as they include a column showing (potential) losses.

5 thoughts on “The Medical Service in the 4th Armored Division.”