In a separate text, I have tried to give a short explanation about the Evacuation Chain and how it worked for the men of the Medical Department in the 4th AD (the Medical Service in the 4th Armored Division). To summarize: the first and second echelons (or links) of the chain were performed by the men of the medical detachments and the men of the medical battalion respectively. Once a casualty would leave a Clearing Station and be loaded into an ambulance to continue his evacuation, he would start his journey within the third echelon. This third echelon was made up of all the medical units attached to a field army (the Third Army in the case of 4th AD casualties).

Lessons of the previous war

On paper, the system of evacuation worked well. However, the reality of World War Two did not always fit the old lessons learned in World War One. But it was these lessons that inspired the Medical Department to plan its medical service along the lines of the Evacuation Chain.

This did not foresee and therefore did not accommodate the incredible speed of advance sometimes made by units like the 4th AD. With these rapid advances, the first and second echelons would move with the combat units without any problem. They were equipped with enough vehicles to be able to keep up the same pace.

The biggest problem was the lack of transport equipment of the third echelon hospital units.

Even an Evacuation Hospital, Semi-mobile (400-beds), could only move about half its equipment and personnel with its twenty 2-1/2 ton trucks at a time.

The bigger type of Evacuation Hospital (750 beds) had a grand total of two 2-1/2 ton trucks! So for its movement, it was fully dependent on other transportation units. 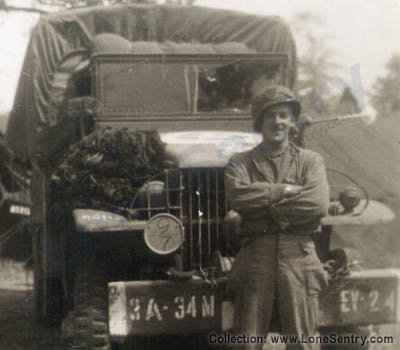 When the combat divisions were able to gain ground quickly, the Evacuation Chain would stretch to the point where the link with the third echelon could break. This jeopardized the entire system.

When the first two (division) echelons could not evacuate their wounded rapidly to the third echelon hospitals, they would get swamped with numbers of wounded that far exceeded their capacities to treat. This in turn would also harm their ability to move with the troops. Where could they leave all those wounded that still waited for evacuation when the medics needed to move?

The Division Surgeon (Lt. Col Morris Abrams) noted in the journal of his office that the nearest Evac Hospital during the fighting in Brittany, France (August 1944) was 100 miles away!

As ambulance driver Jim Sanders wrote in his book Saving Lives, Saving Memories: “Whenever one (hospital) closed down, our platoon simply drove until we found another one that was open” (pg. 44).

So wounded men had to be evacuated, laying on uncomfortable litters, by ambulances traveling over rough roads over these extreme distances. We can only try to imagine the suffering these men had to endure and what additional risk to their wellbeing this brought.

Confronted with the results of this “weakest link in the chain” the Medical Department personnel were forced to improvise and adapt the plans to the reality of rapid mobile warfare. They did this brilliantly in a multitude of ways:

1)           The Field Hospital units were often split into separate platoons. Each platoon (capacity of 100 beds), often strengthened with Auxiliary Surgical Teams, would be attached to a division and located near a Clearing Station. In the case of the 4th AD, the first platoon of the 16th Field Hospital was attached and located near the Reserve Medical Company Clearing Station. This meant that the most severely wounded (chest wounds, head wounds, etc.) could be evacuated to a hospital close by. This setup was the origin of the later MASH units of the Korean War. 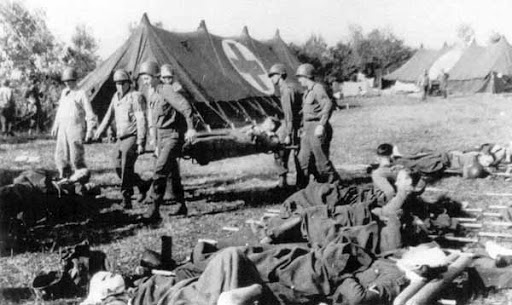 2)           The lack of mobility of the Evacuation Hospitals was partly solved by combining the transportation capacity of two hospitals or one hospital and a Gas Treatment Battalion. This was enough to move one Evacuation Hospital, Semi-mobile, in one haul. Two hospitals could thus leapfrog in their efforts to keep up with the rapid advance. As one hospital set up and started operations, the other could close, pack up its equipment, and be moved to the next location.

3)           Sometimes the Reserve Medical Company of the 4th AD  was used as “Relay Station”. To provide medical service to the men on their way to the third echelon, when these hospitals were far away, the Reserve Medical Company would set up such as a “Relay Station” where casualties were checked and given additional treatment. This to ensure they would reach the third echelon hospitals alive. It would break the long distance to a third echelon hospital without medical care into two shorter distances.

4)           To make the evacuation from the Division Clearing Stations to the Evacuation Hospitals more efficient the Division Surgeon of the 4th AD tried to get the Third Army and the Corps Surgeon to establish what he called Ambulance Regulating Points (ARP). As is written in the Division Surgeon’s Journal Sept 1944 on September 16th, 1944:

“Major Frank has contacted the Corps Surgeon on the establishment of Ambulance Regulating Points. They help our ambulances with the necessary information to quickly find active hospitals to leave their patients with. This way they do not waste time”.

“(Lt.) Col (Morris) Abrams is still trying to get the Army Ambulance Regulation Point to work to our advantage: it should direct our ambulances to hospitals that can accept our wounded without undue traveling. It must change location with the opening of roads and hospitals. The Medical Group must notify us through the medium of Army ambulances returning and the MAC liaison officer as to the location of the Regulating Point”

With the establishment of these ARPs, the drivers of the evacuating ambulances would know exactly where they could bring the wounded men.

The Division Surgeon’s Journal of December 28th, 1944, so during the Battle of the Bulge, shows:

“Some difficulty was experienced due to the fact that all Evac Hosp supporting us were filled to capacity and it was necessary to evacuate casualties to Sedan. Since we are operating with a new Medical Group and under a new Corps  we found that no Ambulance Regulating Points have been established. This caused our ambulances to drive long times in search of Evac Hosp able to admit our patients. Due to the long haul we have set up a Relay Point at Hachy (Belgium). This Relay Point allows our ambulances to return much sooner”.

As we can see the innovation of an Ambulance Regulating Point was not yet standard operating procedure within all Corps of Third Army.

Even if these best practices were not standardized immediately, I believe that these innovations show the Medical Department personnel at their best! They managed to provide the men of the 4th  AD with the best care possible under the most difficult of circumstances by innovation and perseverance. They truly deserve our deepest admiration.