As this research focusses on the medical service within the 4th Armored Division (4th AD), let us talk a bit about the organization of the 4th AD. We can understand the story of the medics better when we understand the “bigger picture” of the division they worked in.

At its activation, it was organized according to the Table of Organization & Equipment (TO&E, this is a list of all the subunits, all the equipment, and all the personnel that made up a unit) of an armored division.

Each regiment consisted of three battalions. Each battalion had three companies. For their orders and supplies, all companies and battalions were dependent on their regiment. This made for a relatively inflexible organization.

To direct all the units in a division during operations the divisions had four tactical headquarters in its organization. Two of these were combat commands called Combat Command A (CCA) and Combat Command B (CCB). They would plan and direct the combat units during combat operations. Reserve Command directed the combat units not engaged in combat and held in reserve. The fourth headquarters, Division Trains (TNS), directed all the non-combat units (the medical battalion, maintenance battalion, etc.) of the division.

In September 1943 the 4th AD was reorganized according to a new TO&E. This new TO&E incorporated some of the lessons learned in the first campaigns of WW2.

In this new TO&E, the armored divisions were no longer based on the three regiments system. In its place, the “Light Armored Divisions” had independent battalions. These battalions were enlarged a bit so that they could take care of their logistics.

The main fighting strength of a “Light Armored Division” consisted of thee tank battalions, each with four Companies: three with medium tanks (M-4 Sherman) and one with light tanks (M5 Stuart).

The armored infantry regiment was split into three battalions (each with three infantry companies).

The combat strength was completed by three armored field artillery battalions (each with three batteries).

For a comparison of the TO&E of the 4th AD before and after the reorganization, I have made this document: TOE Heavy vs Light AD.pdf

So with this reorganization, the 4th AD fighting strength went from 18 tank companies to 12 tank companies. The total strength in tanks went from 232 to 168. And the total personnel strength decreased to a little under 11,000 men.

With these smaller “building blocks” the division may have lost some fighting strength but it gained more flexibility in its organization. With independent battalions, the division commander could assign a variety of combat units to the two combat commands based on the missions they were given.

It is interesting to note that the 4th AD kept to the doctrine of using two combat commands most of the time, where many other division commanders chose to turn Reserve Command in a permanent third combat command (often referred to as Combat Command R, or CCR). Using CCR in combat would give a division a bigger “punch” in combat. It would be like boxing with a third fist. The downside to this was that it would leave the division with little or no reserve. If he did want a reserve, the division commander would have to weaken his three “fists”. Another drawback to using CCR constantly was losing a lot of flexibility.

Understanding these drawbacks well, Major General Wood chose to stick to the doctrine and use its flexibility to the maximum. The 4th AD used Reserve Command as fully functional CCR only twice during its campaigns: in September 1944 (during the fighting east of Nancy, France) and in December 1944 (during the fighting towards the besieged troops in Bastogne). The 4thAD did use the combat units attached to the Reserve Command in combat multiple times, but then more ad hoc.

The weak points of the new TO&E

When you look at the comparison of the Heavy and Light Armored Division (TOE Heavy vs Light AD.pdf) there is one other aspect of the reorganization to a “Light Armored Division” that stands out: the loss of the armored supply battalion. With this change in the TO&E the “light” armored division therefore lost the 96 2 ½-ton trucks the supply battalion had, for a total of 336 ton of transportation capacity. This supply battalion carried mostly ammunition and was supposed to enable a “heavy” armored division to move 250 miles from the nearest Army Supply Point if necessary. Losing this would make these armored divisions even more dependent on attached quartermaster truck companies of the army they would be assigned to.

All these units were attached to the 4th AD for so long that they became “part of the family”. We can see this in the fact that the division commander offered them to wear the 4th AD patch on their uniforms.

Without these attached units an armored division had its weaknesses. With these units attached it was a powerful and all-round combined arms force. Especially when it was commanded by a capable general. 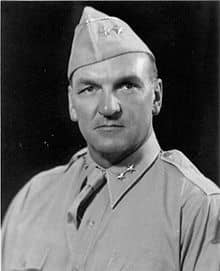 In this respect, the 4th AD was very lucky. Major General John S. Wood trained the division and turned it into one of the best fighting units in the Army, if not the best.

It was customary in the Army that the division commander could choose a cool nickname for an armored division expressing its character.  For example, the 1st AD was called “Old Ironside”, the 2nd AD “Hell on Wheels”, the 3rd AD “Spearhead” etc.).

General Wood was given the change to choose such a name. He refused. He famously stated that “they shall be known by their deeds alone”. For him and all the men of the division, Fourth Armored Division was name enough.

This did not mean that the division was not given any names during the war. People, including members of the press and the German military, did come up with many different descriptions like “Fire Call”, “Breakthrough”, “Roosevelt’s highest-paid butchers” and “Patton’s favorite”.

General Wood had his own nicknames and descriptions worth mentioning. He was called “P” (for professor) and “Tiger Jack”. Probable the most significant description of him was that “he could out-Patton George Patton”, showing his aggressiveness in battle and his grasp of mobile warfare.

His men knew this all too well as he famously announces to them: “This division will attack and attack, and if an order is ever given to fall back, the order will not come from me.”

With this esprit de corps he took his division into battle on July 28th 1944. He commanded the 4th AD until December 3rd 1944. He led the division during the breakout of Normandy, the race through France, the battles around Nancy and Arracourt, and the Lorraine Campaign.

After his relieve of command General Wood was succeeded by Major General Hugh J. Gaffey. General Gaffey commanded the division during the Battle of the Bulge and the fighting to the Rhine. 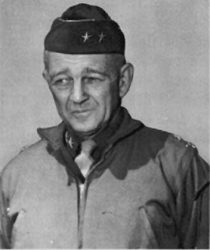 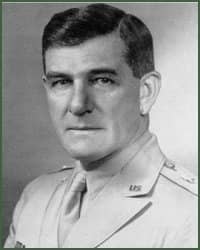 He was succeeded by Major General William M. Hoge on 23rd March 1945. He commanded the division for the rest of the War, across Germany and into Czechoslovakia.

Both successors soon found out that no matter who commanded the division, the 4th AD in its soul remained Wood’s Division.

If you are interested in the story of the 4th Armored Division during World War Two I highly recommend purchasing the fantastic books written by Don Fox: Patton’s Vanguard and The final battles of Patton’s Vanguard! They are great resources to understand the incredible story of this great division. Please click on this link to get more information: www.pattonsvanguard.com.