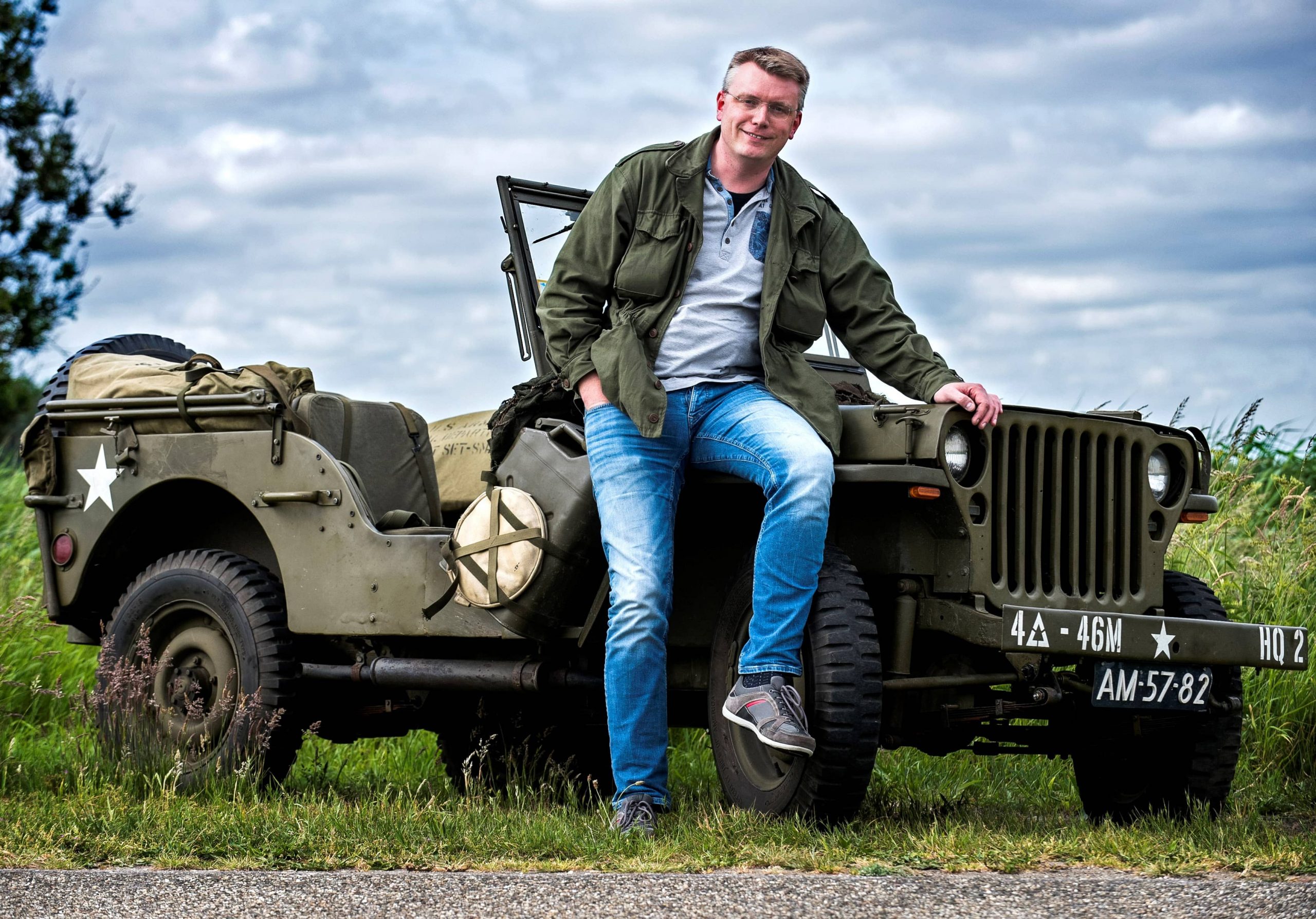 Hi, My name is Reinier Groeneveld.

I work as a Family Doctor/ General Practitioner in the Netherlands. So just to be clear: I am not a historian.

But besides my work I do spend a lot of time on my hobby and passion: Military History.

That passion has been focused on my research of medical personnel of the 4th Armored Division for the last number of years.

How my research started

It started with my wish to find out more about one of the medical units of the 4th AD:  the 46th Armored Medical Battalion.

You see, I am the owner of a WWII Jeep. My Jeep was left to the French Army after WW2 and before using it the new owners removed all original markings.

So, in a way I bought a blank canvas when I bought my Jeep. Being a doctor, I decided to paint the markings of a medical unit on my 1943 Willys MB. My fascination with Patton’s Third Army soon led me to the medical battalion of the 4th AD. It is now marked as the second vehicle of the 46th AMB’s HQ-co.

One of the many things I planned to do with my Jeep was to participate in commemorative events here in the Netherlands. It was with these events in mind that I decided to do a little bit of research into the 46th AMB. I thought that any visitors to these events might be interested in hearing a bit of background of the markings on my Jeep. I could not have predicted that seven years later I am still doing “a little bit” of research into this story and I hope to continue for years to come.

Recollections of a Liberator

When I searched the internet for information I found a partial After Action Report and I found a report written by Captain Frederick B. Lea titled “Recollections of a Liberator”. Captain Lea was the Division Medical Supply Officer of the 4thAD and the company commander of the Headquarters Company, 46th AMB.

In his report he describes his experiences during the liberation of the Ohrdruf and Buchenwald Concentration Camps (April 1945). Reading this report turned out to be a life-changing experience for me and made me want to find out more about the author and the unit he served in. This fascination has only increased in the course of my research as it expanded to include all the medical personnel in the 4th AD.

The story of their experiences during the fighting in Europe brings to light the often untold stories of millions of servicemen. They are often not mentioned in history books. These books deal with the men in the foxholes, the tank turrets and the cockpits or with the generals commanding them.

The “heart” of an army

Sometimes people write about the Army and describe the number of men in actual combat versus the men in a supporting role. This is sometimes referred to as “the teeth to tail ratio”. Often the writer uses this analogy of a wild beast to prove the point that the “tail” is growing too large for the size of the “teeth”. So it is an analogy with a negative connotation.

When we look at an Army using a similar analogy of an animal, but in a more positive way, we could also choose to see the men in combat as the teeth, the generals as the brain but then we also see the men in the medical service as “the heart” of an Army. A heart that is now often overlooked in books. I strongly feel that the story of the men of the Medical Department serving in the 4th AD speaks for the many untold heroes of the War.

My passion, my goal, my duty

I am very lucky for having had the opportunity to travel across Europe in my Jeep retracing their footsteps. Looking at the same scenery, driving the same roads, crossing the same rivers, it brought me as close as I can get to their experiences.

I hope you can see how the story of these men has sparked a passion in me. This has become more than just a hobby for me. I feel that researching and retelling this story in a sense has become my duty.

It has become my way of paying tribute to our liberators. To thank them for helping us receive the greatest gift of all: our freedom.

And it is my way of making sure their experiences and lessons learned are not forgotten. I believe the motto on the 46th AMB crest sums it up best: “Ut Iterum Servias” – To Serve Again. By retelling their story, their sacrifices can provide us with a great service again. That of renewed appreciation of our freedom and the price that people paid for it. The price they paid truly makes it the most precious gift we have received.

I hope you will join me in my quest to learn from these heroes. If you have anything to add to this research/ website please leave me a message in the contact page.