Let’s talk about the logistics of the medical service. From complete medical chests and bottles of whole blood to every first-aid kit and can of foot powder ever used, all the medical items needed to be brought towards the front before any medic could use them to treat casualties.

So having a medical supply system that worked was not just important, it was lifesaving.

I am going to divide this into two parts: general supplies and medical supplies. I make this division because they were two separate supply chains within the armored division. For a general overview of the logistical system of an armored division, I invite you to read parts I and II of this series.

A. General supplies for the medical detachments

For all their supplies, except for the medical supplies, the medical detachments were dependent on the S-4 section of their battalion. So they received their rations, fuel, clothing, etc. from the (combat) trains of the battalion they were attached to.

FM 101-10 Staff Officers’ Field Manual Organization, Technical and Logistical Data (12 October 1944) showed that for their fuel supply the medical detachments were deemed part of the headquarters and headquarters company of each battalion. 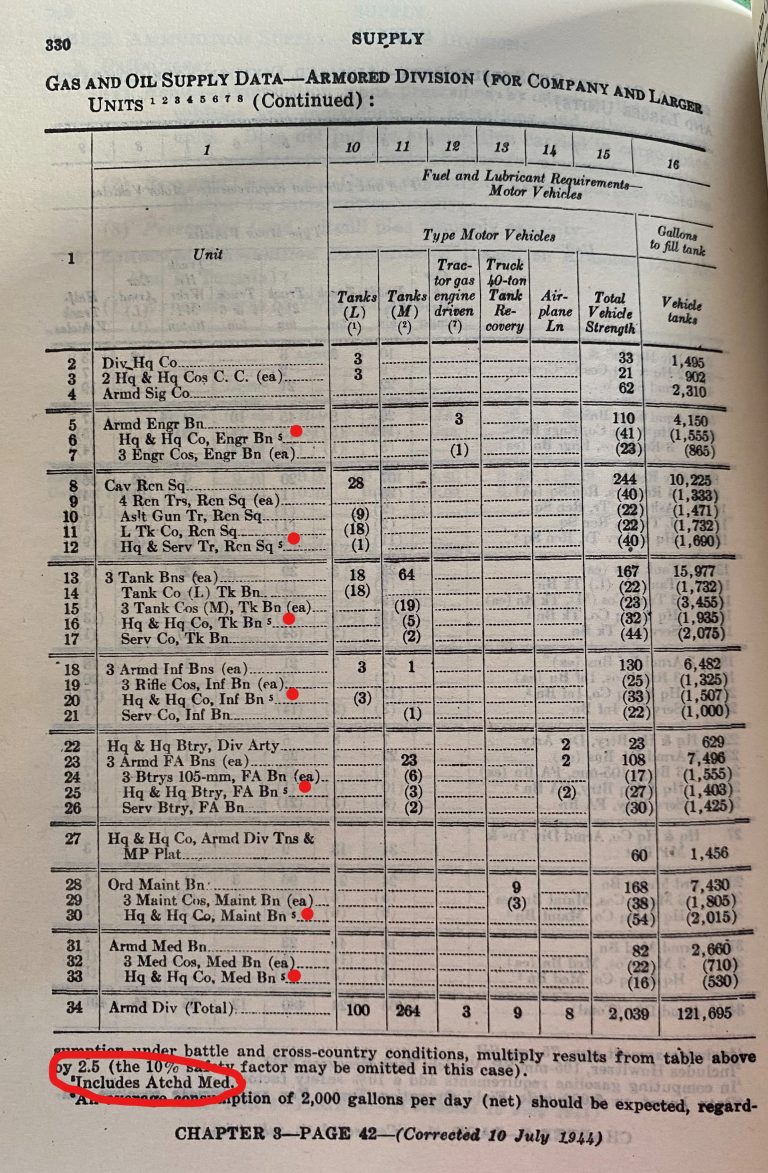 B. General supplies for the armored medical battalion

As with all other battalions in the armored division, the armored medical battalion was responsible for the requisition and transportation of its supplies. This responsibility rested with the battalion S-4. In the case of the 46th Armored Medical Battalion, this was Captain Frederick B. Lea.

Interestingly, he actually had three jobs to do at once. FM 8-5. Medical Department Units of a Theater of Operations (May 1945) describes his jobs as follows (bold letters added for clarity):

(a) Company headquarters. The company commander is also battalion supply officer (S-4) thus being a member of the battalion staff, and division medical supply officer thus being a member of the division surgeon’s staff. For his duties see S-4 of medical battalion, infantry division. The company commander is assisted in company administration by a first sergeant and a clerk. The mess section prepares meals for personnel of battalion headquarters and headquarters company. A supply noncommissioned officer is charged with the usual company supply functions.

(c) General and medical supply section. This section is essentially the same as the corresponding section of the medical battalion, infantry division. (Also see FM 17-80.)

So with his three jobs, he had to “serve two bosses”: the Commanding Officer of the Armored Medical Battalion (Lt. Col. Robert Mailliard) and the Division Surgeon (Lt. Col. Morris Abrams).

He also had a set of unique challenges on his plate as a consequence of the Armored Medical Battalion’s set up.

You see, all the other battalions usually operated with all the companies near each other. This made for relatively easy distribution of supplies within the battalion.

With the Armored Medical Battalion, however, most of the time two of its companies were attached to the Combat Commands. Especially in the 4th Armored Division, these Combat Commands often fought at significant distances from each other.

This meant that the medical companies were often located at a great distance from the battalion headquarters and of each other. Any supply truck would not only have to haul the supplies from the Army Supply Points, but it then needed to drive the distances to both Combat Commands.

This made the distribution of the supplies from battalion headquarters to the medical companies very difficult, especially during the rapid advancing operations of the 4th Armored Division. Solving this problem required a lot of improvisation. This is clearly shown in the Annual History of the 46th AMB- General and Division Medical Supply 1944.

As we can see, the problems were solved by “hitchhiking” supplies in the trucks of other battalions and by overloading the available trailer. This is clearly a weak spot in the “independent battalions” doctrine of the “light” armored division.

As with all other supplies, it was the responsibility of the field army to push medical supplies forward towards the divisions. This was done by the Medical Depot Companies attached to the Third Army: the 32nd and 33rd Medical Depot Companies. These companies had Advance Sections (Adv Sec) that were highly mobile and were able to support the advancing troops by establishing a forward depot with sufficient stock of medical supplies for 5 to 10 days. 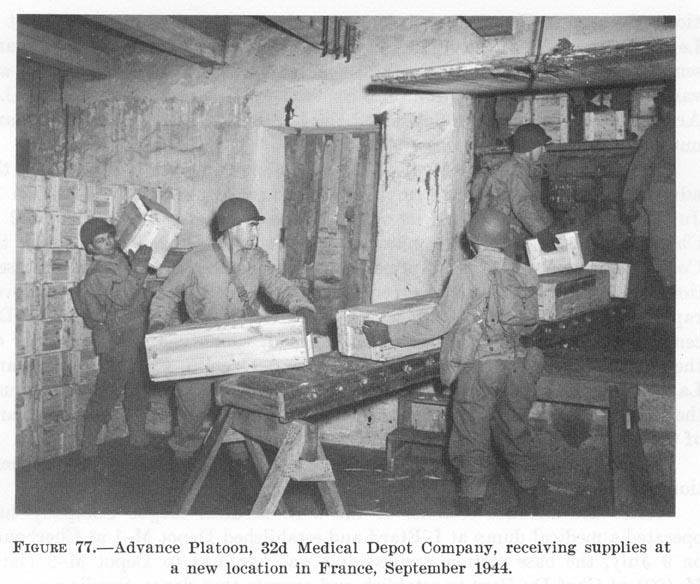 The medical supply trucks of the 46th AMB resupplied at these medical depots.

For example, while the 4th AD fought its way to Bastogne, the nearest Medical Supply Depot was the Adv Sec of the 32nd Med Depot Co, located at Aumetz, France (it re-opened at this location on December 19th 1944). With the 46th AMB HQ located at Hachy, Belgium, the medical supply truck needed to drive 31 miles to get resupplied. 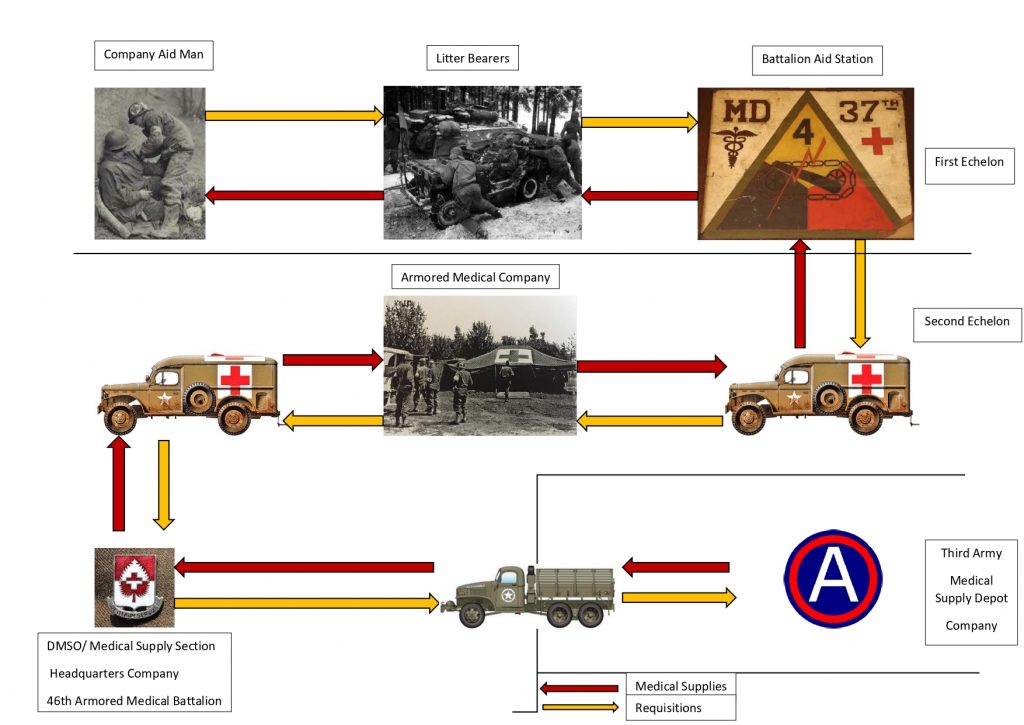 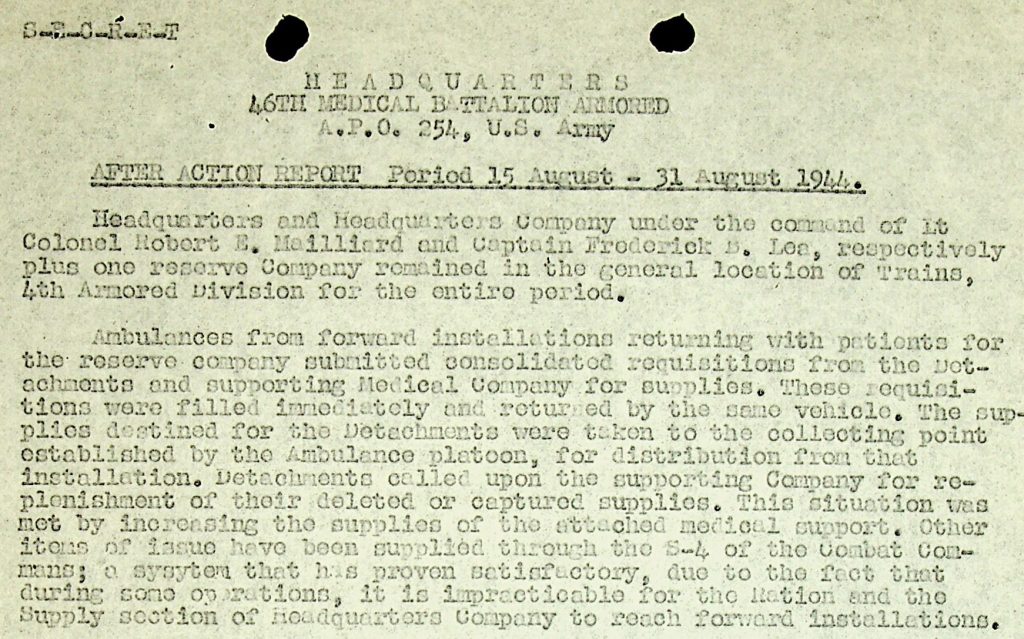 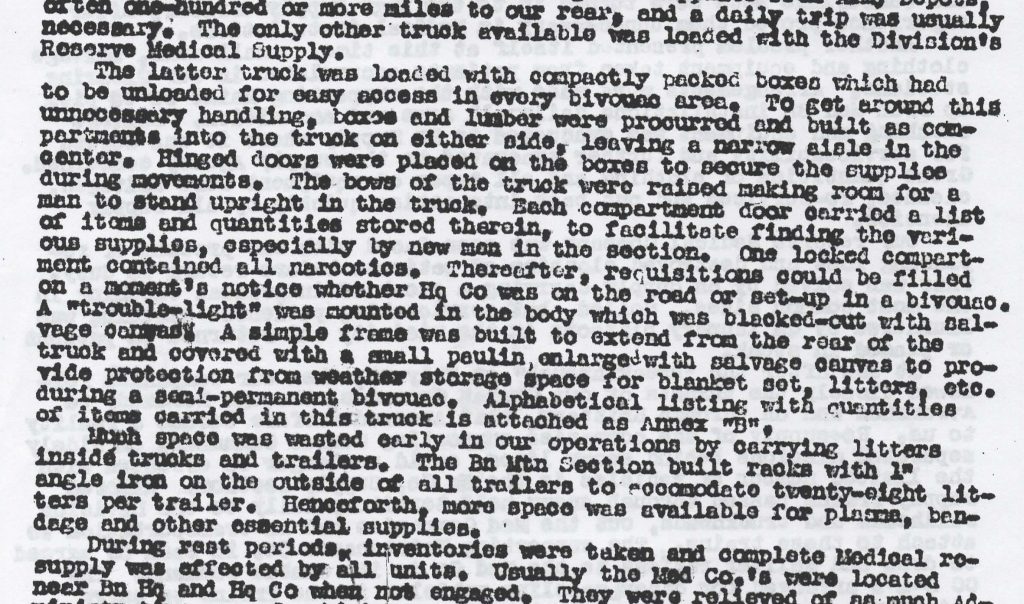 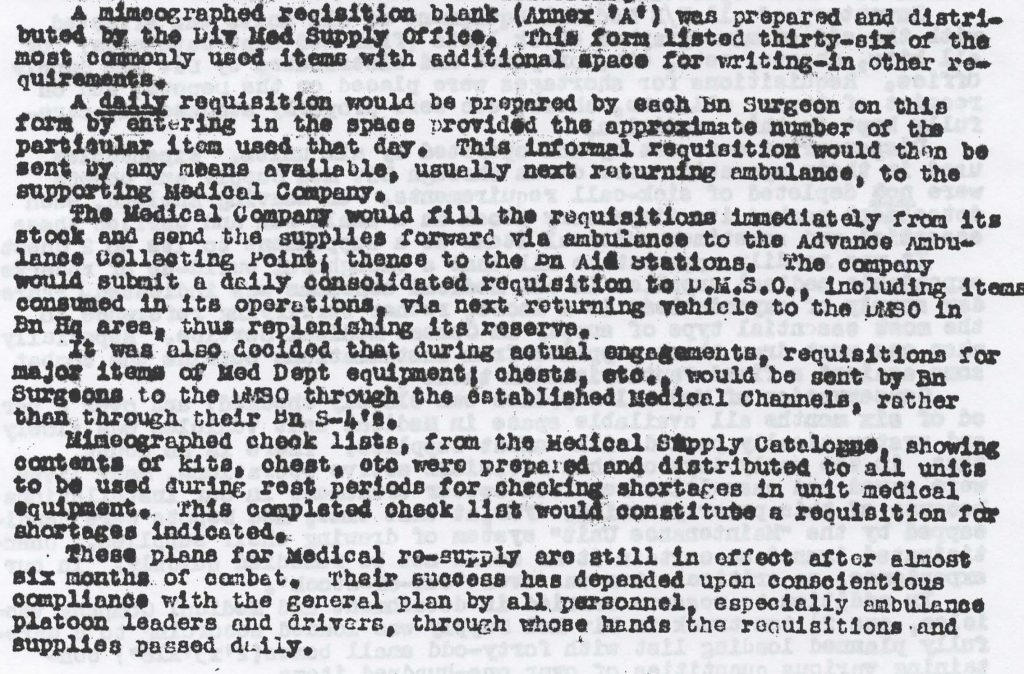 Interestingly, the same type of innovation was found at the Third Army Medical Depot Companies.

According to the book Medical Supply in World War Two :

“Shortly after their arrival on the Continent, many units were traveling long distances to the medical depots for supplies. Prevailing depot procedures and workload dictated that units submit requisitions, then return a day or so later to pick up the supplies. Seeking ways and means to process requisitions while the customer waited, the 32d Medical Depot Company discovered that more than 95 percent of the requisitions involved the same 250 fast-moving items. This led to a procedure that opened with a 10-minute visual edit by a well-qualified noncommissioned officer, who was fully cognizant of the supply position of the 250 fast-moving items. When the supply of a fast-moving item was limited, the noncommissioned officer rationed the available supply to make certain that equitable distribution would be effected. Following the edit, one copy of the requisition was immediately sent to the warehouse for selecting bulk supplies while a second copy was sent to the Loose Issue Section for selecting less than case lots. Upon completion of the selection of stock, the requisitions were compared to make certain that all supply action had been effected and that information was posted to both copies of the requisition. One copy was released to the requisitioner for his voucher file, and he returned to his parent unit with the available materiel. The second copy was forwarded to the depot stock record account for “post-posting” action. Depot records were necessarily brought up to date during the late evening hours and no loss of control was experienced.

This procedure permitted rapid supply action, saved unnecessary trips to the depot by consuming units, and was widely hailed by command and staff elements and the using agencies of the Third U.S. Army. It was pointed out that, in support of a fast-moving field army, few organizations carried more supplies than they actually required and if the requisition item was in stock in the depot, it was issued”. 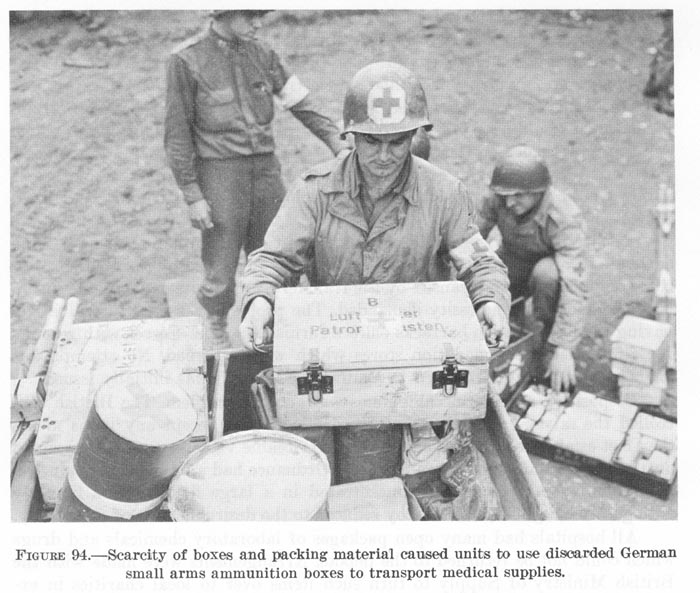 We can get a sense of the amounts of medical supplies captured by the statement written by Charles Odom, MD. He was the Third Army Surgical Consultant. In the postwar book on the Activities of the Surgical  Consultants he wrote:

“In addition, at intervals, U.S. Army equipment was supplemented by captured equipment. During August 1944, for instance, more than 200 tons of German medical supplies were captured. About a third of this material could be used by U.S. Army medical units and was channeled accordingly.”

The allied armies captured so many German medical supplies that the Communications Zone (COMZ) decided to set up a separate Medical Depot tasked with collecting, sorting, and checking captured enemy medical supplies. These supplies helped to equip and supply 28 US Army Hospitals. (Medical Service in the European Theater of Operations ,page 348)

The 4th AD certainly played its part in capturing theses German supplies as we can read in the 4th AD AAR for 26 March 1945:

Most of the German supplies captured in 1945 were used to provide German POWs and Displaced Persons with medical supplies.

In the 46th Medical Battalion, Armored AAR August 1944, we can read the importance of these captured supplies. They even helped to expand the possibilities of medical treatment of the 4th AD wounded.

4th AD AAR for 6 October 1944 reads:considerable number of captured vehicles operated by units of the division have been picked up by higher headquarters as being unauthorized. Efforts to secure authorization for retaining the vehicles have been made but to date without results. It has been advised that even German Ambulances in use, will be picked up by Army if not registered.”

So, why all these messages about the unauthorized use of captured vehicles? Well, even when the US Army in WW2 was the most mechanized army of the war, additional vehicles were always needed. 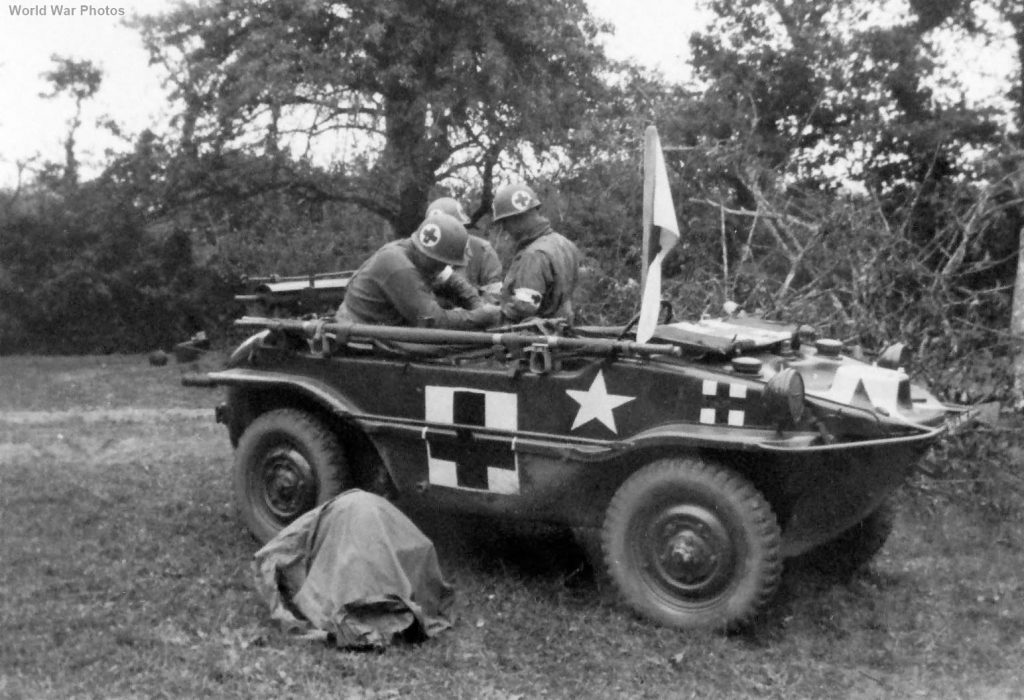 I don’t see any US Army registration numbers, so I assume its use was unauthorized. Whether higher headquarters did “pick it up”, I do not know.

Actually, I don’t know why the US Army was so opposed to using captured vehicles. The only reason I can think off is that G-4’s in the higher headquarters might have worried about any extra fuel requisitions.

I can only imagine that the wounded soldiers of the 704th TD didn’t care whether their medics came driving in a Jeep or a Schwimmwagen when they needed medical attention.

And the bleeding in their wounds could be stopped whether it was treated with a bandage or a “Verband”. I am sure both the medics and the casualties didn’t care whether it was made by Bauer and Black, Chicago, Il. or Dr. Degen und Kuth, Düren.  Would you care?