There are several variations of this quote (do amateurs talk strategy or tactics? And do professionals talk or study logistics?) It is also attributed to more than one man. Whoever may have spoken (a variation of) these words, he understood a key point in military operations: without a solid supply system, you are not going to win!

With the essential role of logistics in mind, I thought: “why don’t I, as an amateur, start talking logistics?” 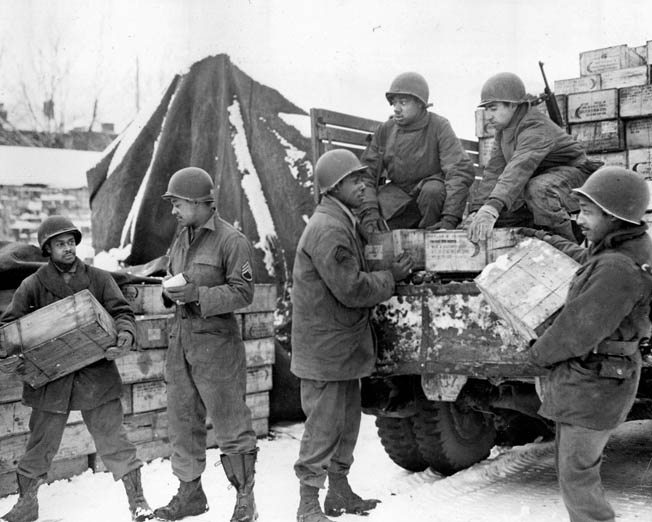 Now “logistics” is a rather broad subject. It is also quite complex. In fact, I had to read the manuals multiple times before I started to get an idea of how it all worked. So I decided to split it into different parts.

In Part I of this series the basic logistical system of an armored division is explained. I will try to keep my explanation of this rather complex system as simple as possible. But even with this simplification, it remains a rather tough bit of reading I am afraid.

An armored division needed all sorts of supplies. The US Army used a classification system of the different types of supplies:

Class I: Supplies distributed automatically based on troop strength, such as rations.

Class II: Items based on the TO&E, such as clothing and personal equipment, vehicle replacements, etc.

Class IV: Supplies for which there was no fixed quantity of issue, such as vehicle spare parts, etc.

There were some differences in requisitioning and receiving these classes of supplies, but a general structure for the logistics can be found. Here I focus on this general logistical structure of an armored division and ignore the subtle differences for clarity.

The role of the field army

In the doctrine of the US Army of WW2, it was the responsibility of the field army (the Third Army in the case of the 4th AD) to push the necessary supplies forward towards the divisions. The Corps within a field army did not play any relevant role in this.

The army established Army Supply Points where the supplies became available for the divisions to pick them up. This could be a railhead or a truck head (supply dump/distributing point) depending on the tactical situation. 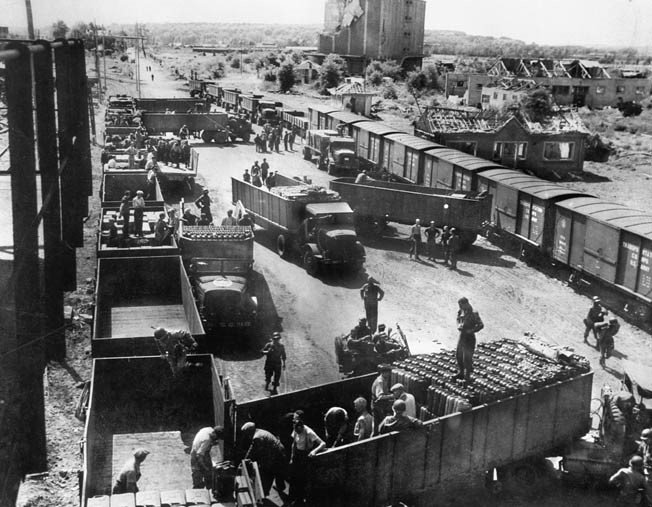 The units of the armored division picked up the supplies at these Army Supply Points. According to FM 17-50 Armored Force Manual -Logistics dated November 7th 1942, these supply points should be no more than 35 miles behind the frontline units to ensure a good flow of supplies.

Now, the rapid advances of the armored divisions often made it very difficult for the field armies to accomplish this. The manual gave several options for the field army to ensure the units would still receive their needed supplies.

In reality, it meant that to bring the necessary supplies forward, the Third Army attached a number of support units to the 4th AD on a (semi) permanent basis. These included several quartermaster truck companies (often up to three) and a quartermaster gasoline supply company.

The supply structure within an armored division

Also, with this new organization, the “light” armored division lost the regimental type of organization. The new organization had individual battalions as its basic building blocks. These battalions were strengthened by adding more transportation and staff capabilities so that they could be fully responsible for their logistics.

This means that all the relevant logistical/ transportation capabilities within an armored division were attached to the individual battalions.

(The supply vehicles attached to the tactical headquarters (Combat Commands, Reserve Command, and Division Trains) and the division headquarters were there just to supply the headquarters themselves). 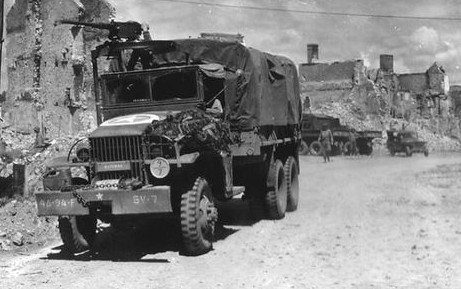 In its most condensed form, we can conclude that the goal of the logistical system was to enable the transportation vehicles of the battalions to pick up supplies at Supply Points created by the field army and bring them back for distribution within the battalion.

All the following information in this post describes the parts, terminology, and players in the system that were necessary to ensure this basic goal was reached. In 4th Armored Division “By their deeds alone”: a brief overview of the division’s actions I give a summary of the (logistical) accomplishments of the division. This gives you an idea of the mammoth task the logistical personnel of the division performed.

All the supply vehicles within an armored division were part of the trains of its unit.

The term Trains can be a bit confusing. FM 101-10 “Staff Officers’ Field Manual Organization, Technical and Logistical Data” (12 October 1944) described the term Trains as follows: “The train of a unit is that portion of the unit’s transportation with its accompanying personnel which operates under the immediate orders of the unit’s commander primarily in supply, evacuation, and maintenance”. 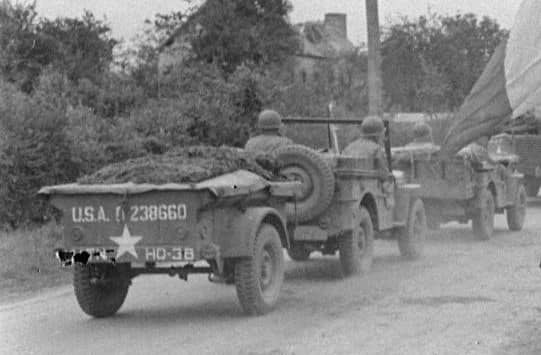 The Unit Trains was further divided into two parts: 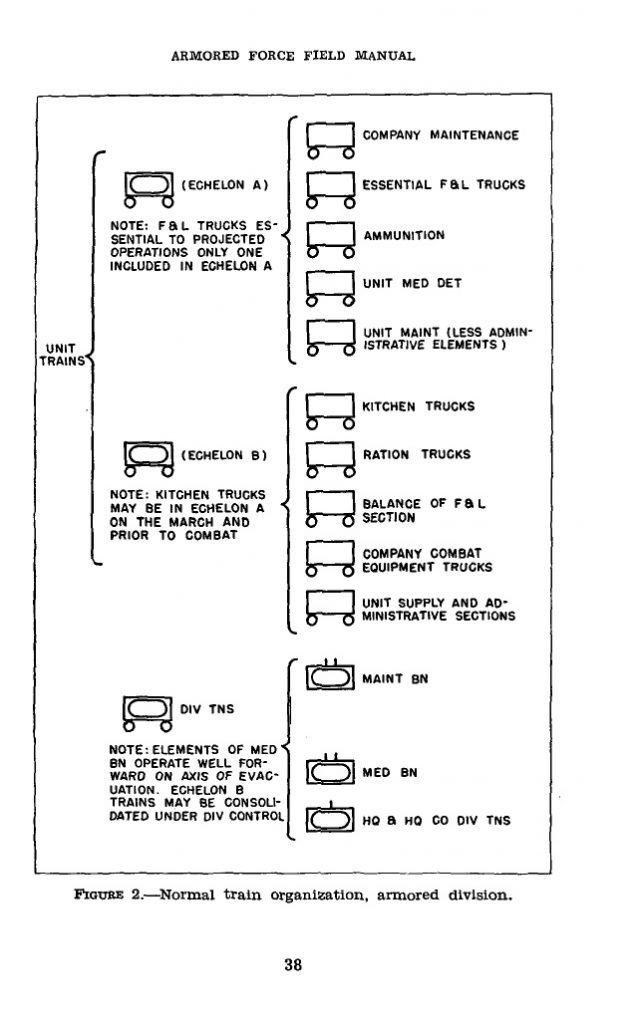 To organize and direct all the necessary requisitions and movements of supplies from the Army Supply Points to the units, the armored division had three levels of staff who dealt with supplies. From the “top to bottom” they were:

The Division Headquarters Staff:  the G-4 personnel and all the special staff personnel concerned with the different types of supplies.

Combat Command/ Reserve Command Staffs: the S-4 of the Command.

Units Staff: S-4 of the battalions.

Note that in all the staff the “4”-section is the Supply and Evacuation Section. When part of a general’s staff it was called G-4, when part of a lower headquarters they were called S-4.

These staff made, forwarded, and consolidated all the necessary requisitions for supplies and directed the movement of the supply trucks.

The Unit S-4 filled out the requisition forms for all the supplies his battalions needed. These forms were forwarded to the Combat Command’s S-4. He only checked them for accuracy as he had no direct role to play in the requisition process. He then forwarded the requisition forms of all the battalions attached to his Combat Command to the G-4 at division headquarters. Together with all the special staffs at division headquarters, the G-4 then consolidated the requisitions and forwarded them to the field army G-4 staff. The special staffs were responsible for their type of supply requests. So, for example, the division surgeon was responsible for all the medical supply requests.

Depending on the tactical situation the different unit trains moves and were grouped at either the Combat Command/ Reserve Command or Division Trains area. Here the responsible S-4 made arrangements (in cooperation with the G-4 at division headquarters) to send the created convoys of trucks to the various Army Supply Points. If necessary, he arranged for armored protection for the convoy. The convoy then moved to the Army Supply Point to pick up all the necessary supplies. The route taken was called the Main Supply Route or MSR. 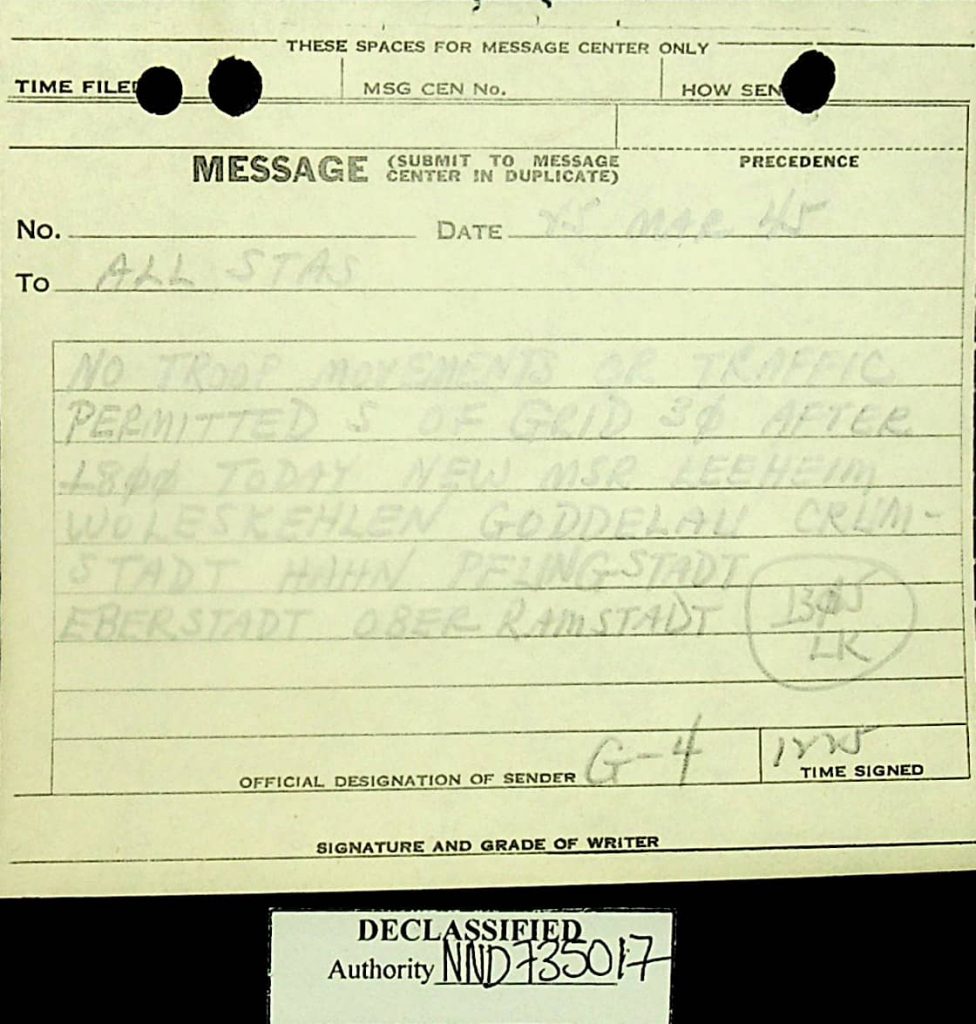 Directing trains from the Army Supply Points to the battalions

After loading all the necessary supplies the convoy moved back to the Combat Command/ Reserve Command or Division Trains area. Here the different supply trucks of the battalions formed up in their trains. The combat trains of the battalions then moved back to the battalions to resupply them and get them ready for another day of combat. These movements would often take place under the cover of darkness. The tired combat troops could only then start to refill the tanks of their vehicles with fuel, ammunition, rations, etc. 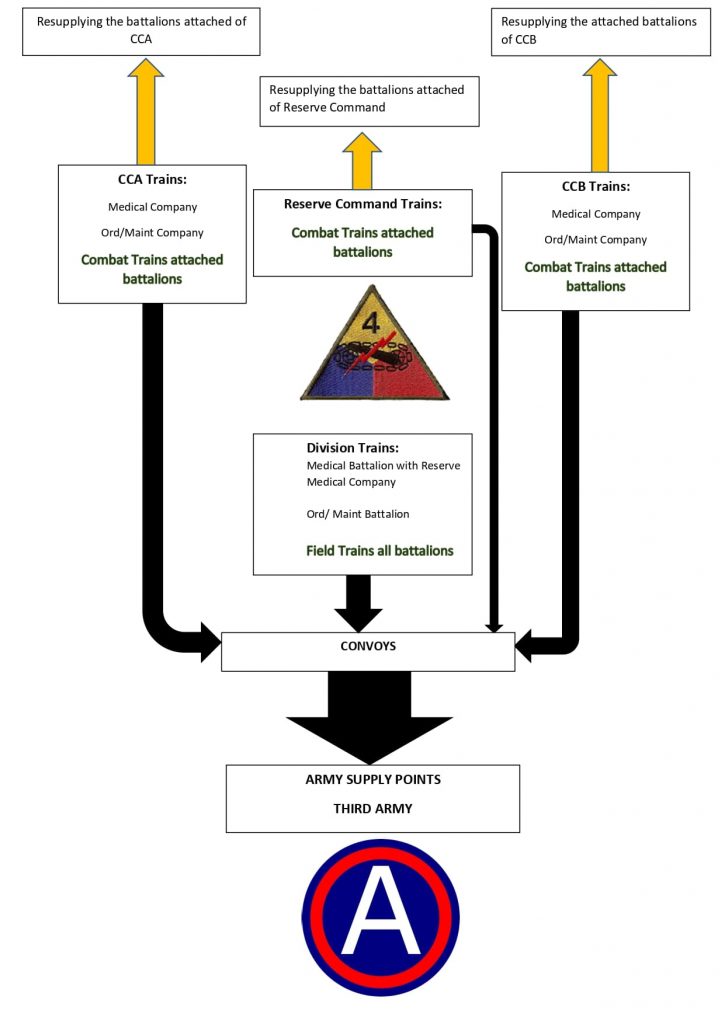 Brigadier General Albin F. Irzyk in his fabulous book:  He Rode Up Front For Patton describes this proces on page 184:

“One of the battalion’s six companies was Service Company. It was that company’s responsibility to provide the battalion with logistical support.

Among it units, Service Company had the very important, capable, dedicated maintenance section. It also had a fleet of GM two and a half ton 6×6 trucks. These were the vehicles that went back to the depots in the rear and picked up gasoline, ammunition, rations, clothing, and other supplies for the fighting elements. Trucks were specifically designated to haul gasoline or ammunition, and each knew to which tank company it would deliver its load.

It was absolutely essential that each morning when the tanks moved out into the assault that they were topped off with gasoline, and had a full load of the various types of ammunition.

During the heady days of exploitation and pursuit across France, the tanks moved great distances. Consequently, the supply trucks had to travel even greater distances. As soon as they delivered their supplies to the tanks each night, they had to race back to the distant depots, load up, and rush forward to catch the rapidly advancing tankers the next night. This procedure was repeated night after night, day after day. It almost seemed as though the trucks never stopped, and the drivers were constantly on the brink of exhaustion”.

All the relevant logistical/ transportation capabilities within an armored division were attached to the individual battalions.

The army established Army Supply Points were it made the supplies available for the divisions to pick them up. These were supposed to be no more than 35 miles from the frontline troops.

The Unit S-4 filled out the requisition forms for all the supplies his battalions needed. They were then forwarded by the staff of the higher headquarters.

The unit trains of the different units were grouped at either the Combat Command or Division Trains areas and formed convoys.

These convoys picked up the supplies at the Supply Points and returned in convoy to the Combat Command or Division Trains area.

From these areas, the Combat Trains of the individual battalions were directed back to their battalions to get them ready for another day of operations.

Hopefully, I have given you a basic understanding of the logistical system within an armored division. From part II in this series onwards I will start to discuss some of the topics, relevant to the medical service, in more detail, starting with a “juicy” topic: fuel.

3 thoughts on “Logistics Series. Part I: Basic logistics in an armored division.”