“My men can eat their belts, but my tanks got to have gas” – General George S. Patton Jr.

Patton spoke these words on 2 September 1944. With the breakout of Normandy and the race across France during August 1944, the allied armies had outrun the transport capabilities of their logistical support. The quote shows the central role the armored divisions played in Patton’s combat plans. It also shows that to play this central role, the armored divisions needed fuel. Lots and lots of fuel.

To move all 2,039 vehicles of the armored division 100 miles it needed 73,177 gallons of fuel! This number of vehicles does not include the vehicles of the attached units such as the tank destroyer battalion. When we include these vehicles, the total number was around 2,500 vehicles.

The total amount of fuel in filled vehicles gas tanks was 121,695 gallons, which would give the division a theoretical range of 166 miles.

These pages of FM 101-10 state that the total fuel consumption for the armored division in cross-country or combat situations should be calculated as being 2.5 times higher! So, to move an armored division 100 miles in combat took 182,942 gallons! 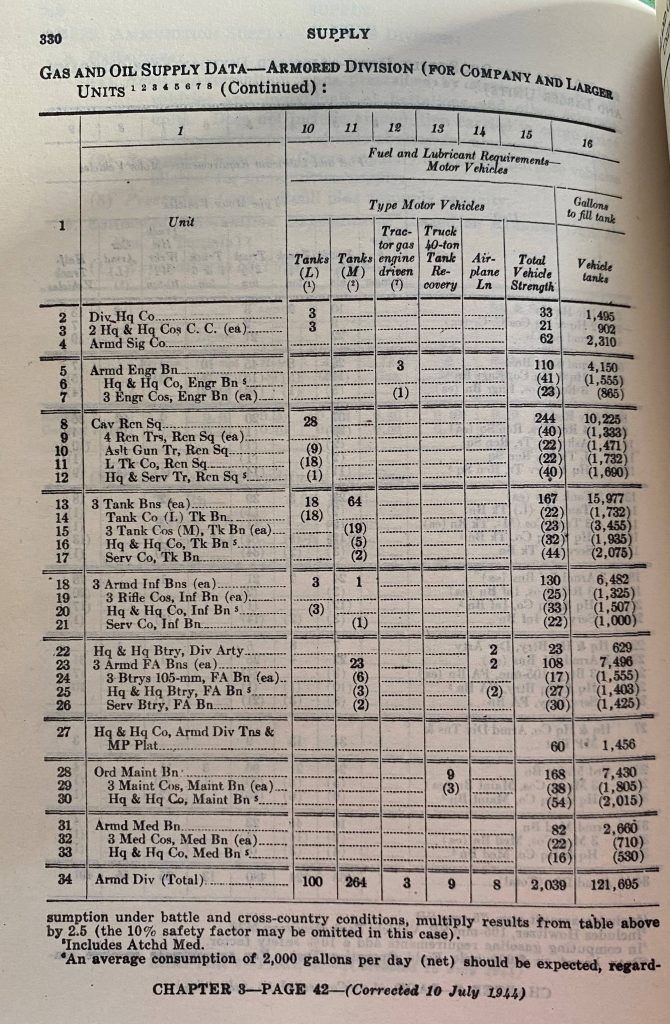 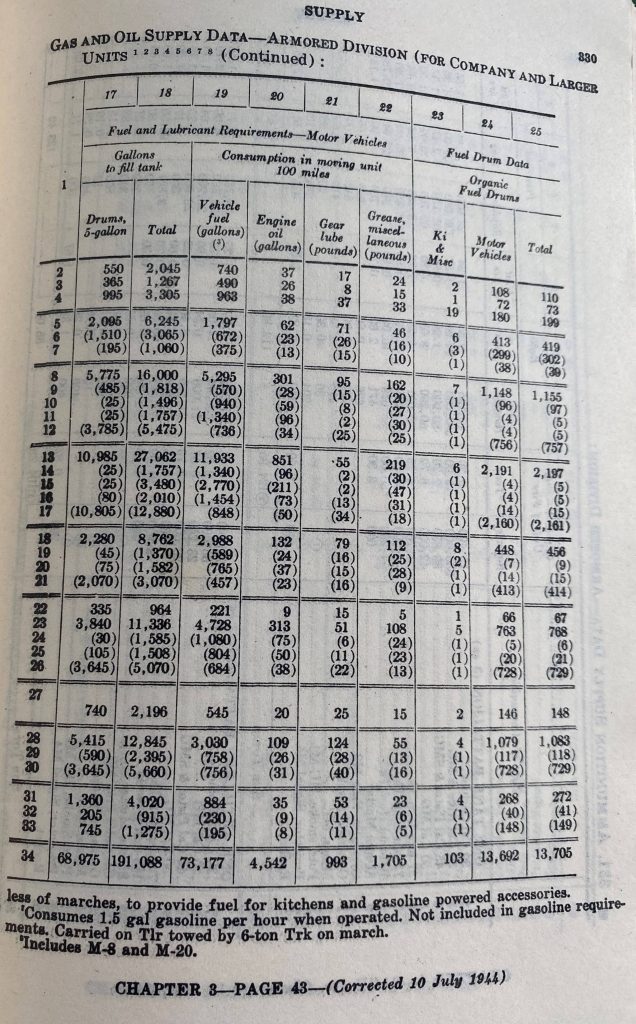 FM 17-100: The armored division in Paragraph 84 stated however that “the division has sufficient transportation for personnel and equipment. Sufficient fuel and lubricants are provided in gasoline trucks and vehicle tanks for approximately 125 miles op operation for division under favorable conditions”.

And FM 17-50: Armored Force Manual-Logistics (7 November 1942) in Paragraph 62c stated: “Experience has proved that, regardless of the number of miles traveled by the division, it will consume, in active operations, approximately 100 miles of fuel and lubricants daily”.

So roughly speaking, an armored division needed to be completely refueled daily.

Brigadier Albin F. Irzyk in his book: Patton’s Juggernaut, on page 234 gives us an idea of how this was done. He describes the refuel stops necessary during the long march of the 4th AD towards Bastogne, December 19th 1944.

“One of the other great responsibilities for me at the lead was not to become lulled as the miles rolled by. I did not need to be reminded that tanks on the move were thirsty gas guzzlers; ours were swallowing them in great gulps. Thus, in addition to the brief rest stops we had to have longer ones to refuel our tanks. I alerted my own tank driver to inform me when the needle was reaching the danger point. In instantly sent word to Service Company, to the other companies, and to General Dager to be ready for: “pull over and stop.”

The moment the word went down the line, the tanks began to slow down and quickly eased into a spot as far off the road as possible and stopped. The supply trucks carrying the gas were in column right behind the tanks. As the tanks slowed, the trucks began bypassing the tanks and picked up as much speed as they dared to. The operation that was about to take place was tricky at best, but under these conditions, it was particularly difficult. Hopefully, the halted tanks were nicely spaced as they had been in the moving column. The trucks were lined up in the same order as the tanks in column – trucks for “A” “B” “C” and “D” companies. The lead “A” Company trucks passed all the companies until they reached the tanks of “A”, “B” trucks to “B” and so on.

The tanks crews would be waiting in the rear of their tanks, the moment their truck stopped beside them the tanks commander shouted the number of five-gallon cans he needed. Immediately the truck driver handed down the cans to the members of the crew who used the bucket brigade system to properly position them. Once in place crew members on the back deck of the tank would unscrew the cap of the can and screw in the nozzle for the gas to be poured in. The empty cans were handed down and lined up for easy retrieval”.

On page 124, he describes a similar scene and writes: “He would unscrew the cap, screw on the nozzle, pour in the five gallons, unscrew the nozzle, hand back the empty and receive the next full one. He would do this probably fifteen times”. 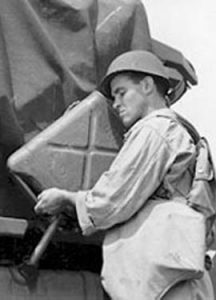 These cans were transported by the battalion’s fuel trucks. These 2 ½-ton fuel trucks each hauled 125 Jerry cans, and their 1-ton trailers carried an additional 50 cans each.

As I write in Part I of this series the fuel trucks, as part of the combat trains, moved via the Combat Command/ Reserve Command Trains or Division Trains area to the Army Supply Points to pick up a new load. 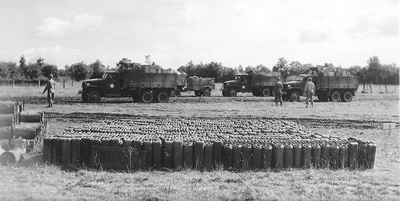 In the case of Class III supplies, the army normally attached a quartermaster gasoline supply company to an armored division. These companies had the equipment to fill the empty jerry cans at an Army Railhead or Truckhead. It moved the filled jerry cans forward and created a Fuel and Lubricants Supply Point/ Dump. At these dumps, the fuel trucks of the battalions would exchange their empty cans for full ones (TM 10-465 Quartermaster Handbook Gasoline Supply Company). 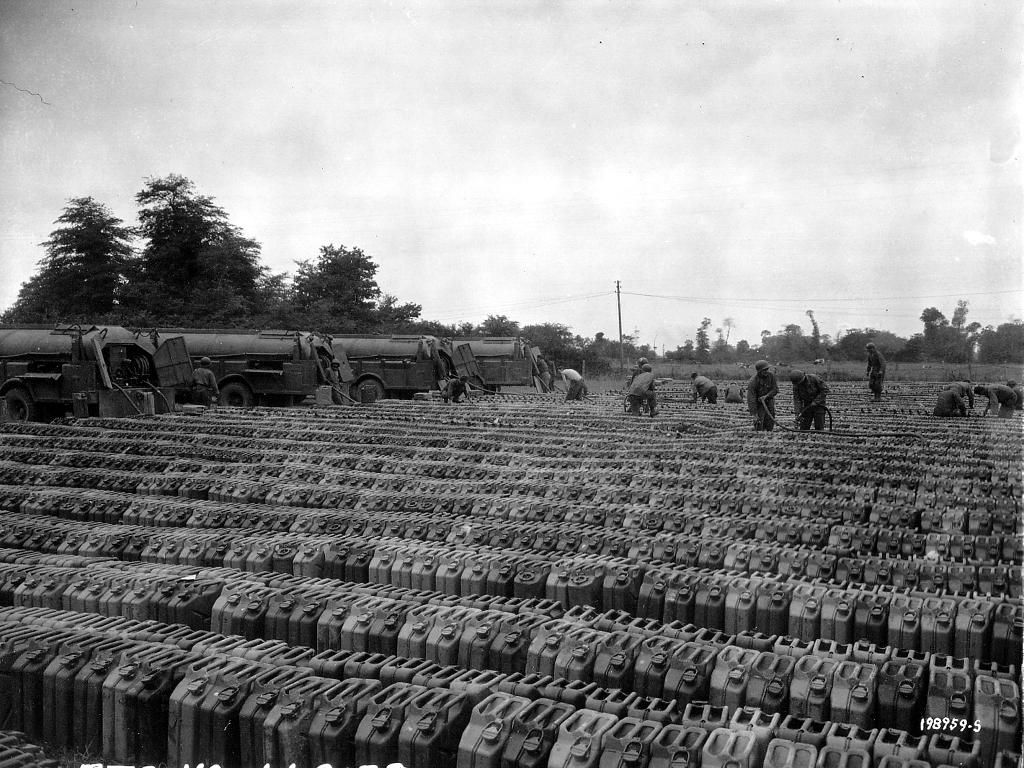 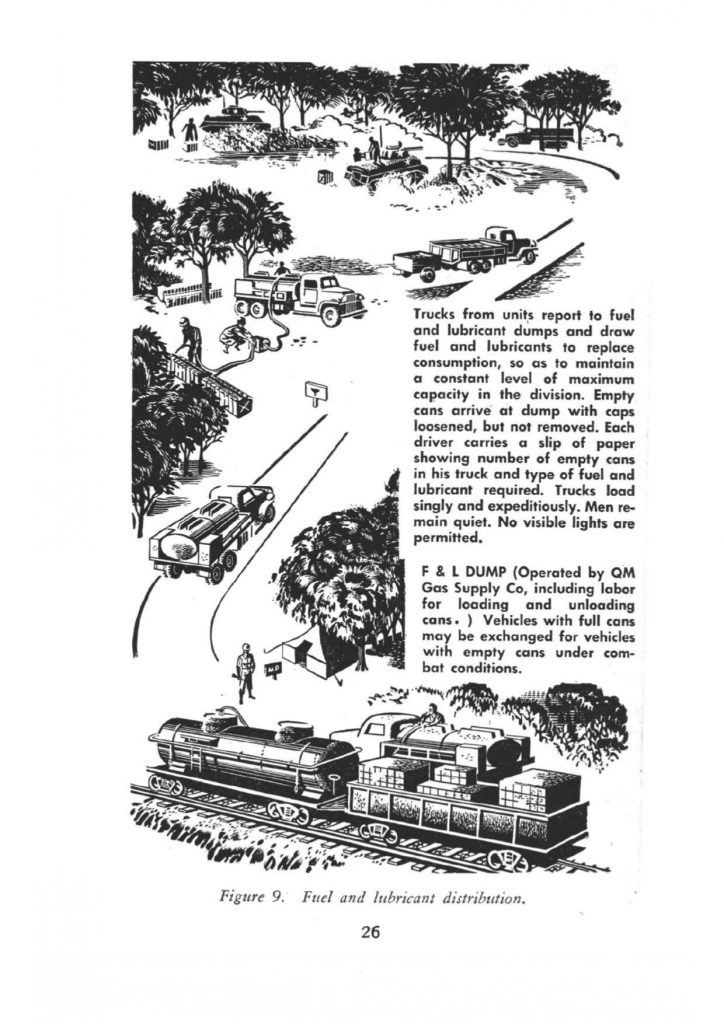 So the basic fuel supply system within the US Army revolved around a “can for can”exchange system.

We can already see where this system’s weak point was, can’t we? What happened to a “can for can” exchange when it collided with the rapidly changing and chaotic reality of war?

Just before D-Day, the US Army had built up a stock of 12.000.000 jerry cans in England. It estimated that around 5% of the cans would be lost per month. To compensate for this loss, and to accommodate the extra divisions shipped to the continent, the Quartermaster Corps concluded that each month 800.000 new cans were needed.

Well, in the chaotic reality of the campaign in Europe, a huge number of empty cans were lost along the way. Far more than the estimated 5% per month. In fact, by October 1944 3.500.000 cans were unaccounted for because the “can for can”system was often disregarded.

According to Logistical Support of the Armies, Volume II (page 203) these cans were found “in a trail from Normandy to the West Wall. Hundreds of thousands lay in abandoned dumps and bivouacs; thousands more were used to build sidewalks in the mud, or used as chairs”.

A dramatic Jerry can shortage threatened the fuel supply of the armies because of this. The Quartermaster Corps, in early January 1945, concluded that not 800.000 but 1.300.000 new cans were needed each month. The US Army in Europe reported just before VE-Day, that it needed 19.000.000 cans to supply all the units in the European Theater at that time.

One of the implemented solutions for all the lost jerry cans was a widespread campaign appealing to the civilians in the liberated countries to return the cans to the nearest QM-depot. This campaign returned about 1.000.000 cans. 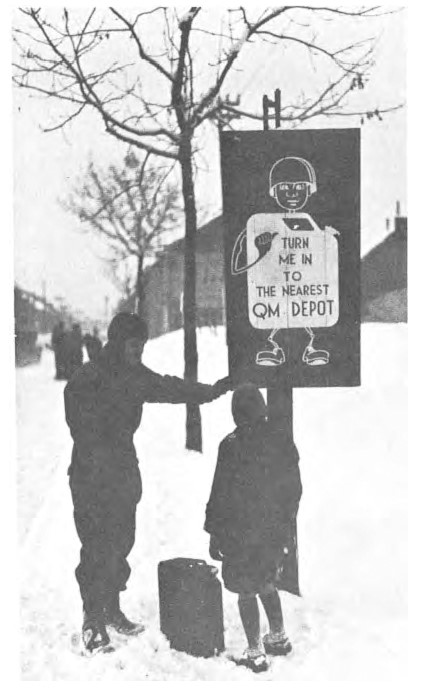 From my personal experience, I can tell you that many cans remained “lost” and can now still be found all over Europe. Sometimes still in use on farms. One more “gift” our liberators gave us.

In my opinion one more example of “By their deeds alone”.