This is part 5 of a multi-part series on Tec5 Joseph N. Korzeniowski, who served as a Surgical Technician with Company C, 46th Armored Medical Battalion. In this part, we look at his service during the Battle of the Bulge and his leave to Paris.

Battle of the Bulge

On December 19th, 1944 Company C, 46th AMB moved north toward the Battle of the Bulge with a new Company Commander. Captain Frank P. Smith was hospitalized on December 18th. He was replaced by Captain George N. Hindson. The company moved at 10.00h from Dieuze, France to Rehon Heumont, France (near the border with Belgium) where it stayed in a school building. 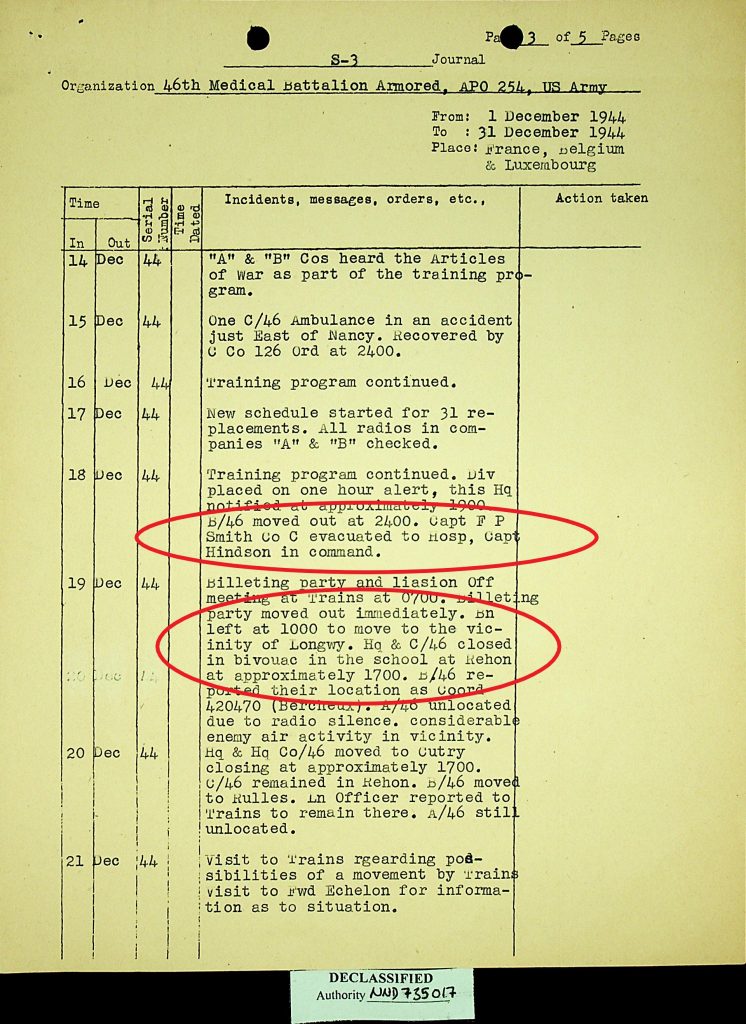 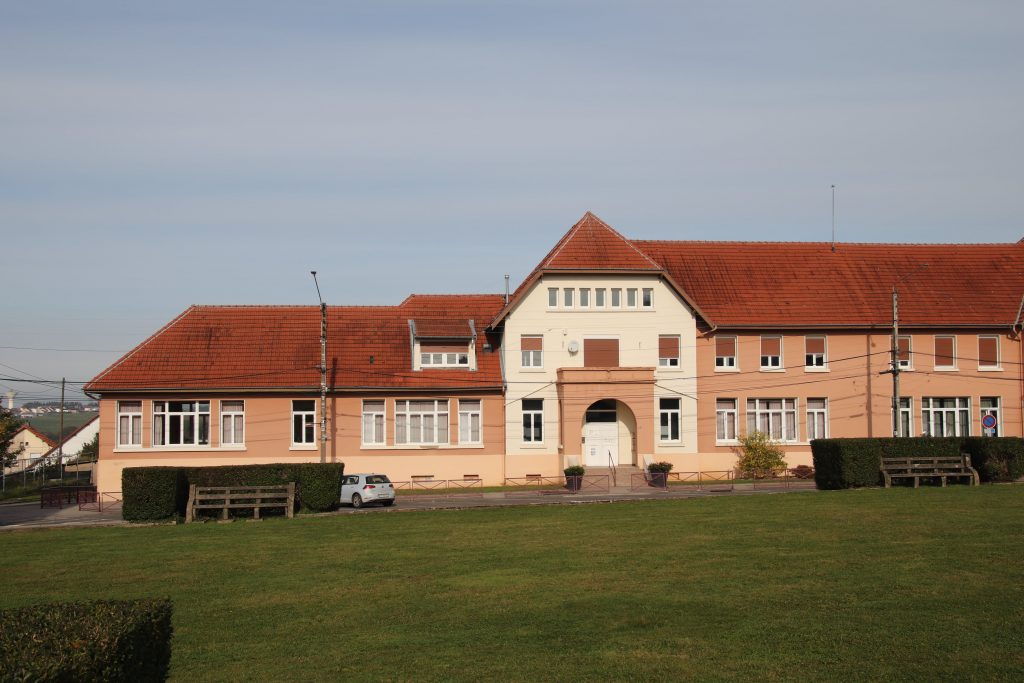 The 4th Armored Division usually attacked with two Combat Commands (CCA and CCB). Reserve Command was mostly used as it was intended, as a reserve force for the division. When the decision was made to “upgrade” Reserve Command to act as a third combat command during the attack towards Bastogne, it needed additional personnel to perform the role as Combat Command.

It was decided that C/46 would not be sent along to support Reserve Command/ “CCR” for second echelon medical services. Second echelon medical services would be provided by the medical companies attached to CCA and CCB respectively. What was needed was a collecting platoon that could bring the casualties from the battalion aid stations of the battalions attached to Reserve Command/ CCR to the clearing stations of A/46 or B/46. To create this collecting platoon, C/46 attached some of its men and vehicles, under command of Lt. Emil Pollak, MAC on temporary duty to CCR. 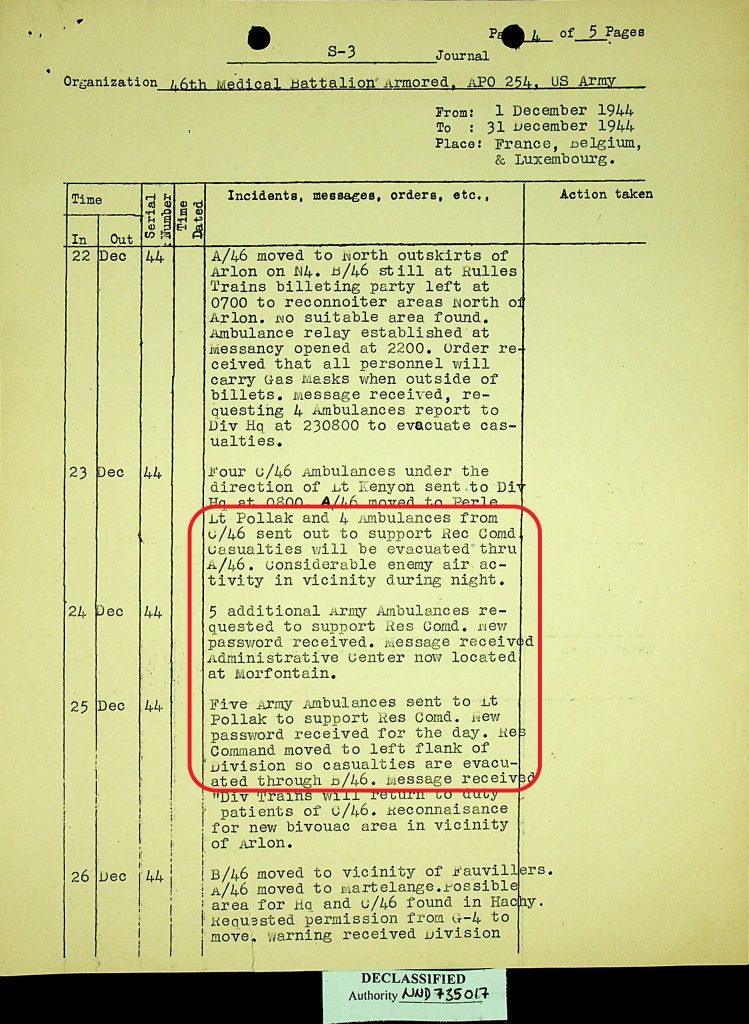 Joseph Korzeniowski was one of the men attached to Reserve Command/ CCR to create this temporary extra collecting platoon: 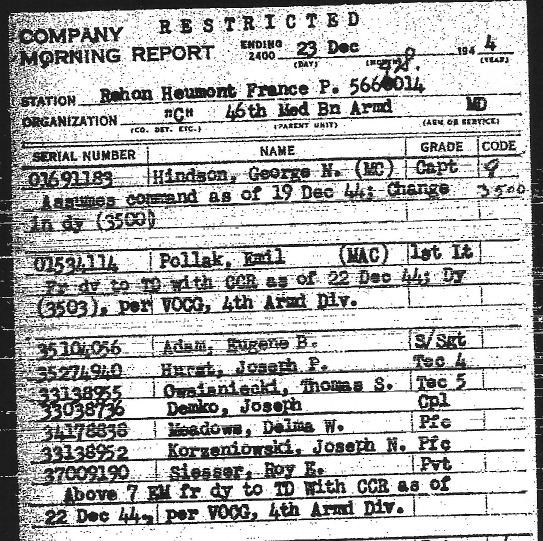 Like many veterans, Joseph did not talk much about his wartime experiences. One story that he did tell his family was of his experience on Christmas Eve, 1944.

“On Christmas Eve we came into a town during battle and were able to find a vacant house. All the men pull their rations together to prepare Christmas Eve dinner. When the table was set and we were about to sit down the commanding officer came in and told us we had to move out immediately. Christmas dinner was left on the table”.

From the Morning Reports of Reserve Command, we now know that this story took place at Perlé, Luxembourg. There is a plaque on one of the buildings in Perlé (now a pizzeria) that tells us that it was used by a medical unit during the battle (although not as a Field Hospital): 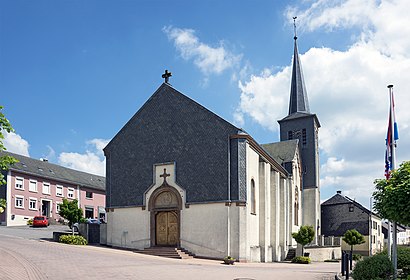 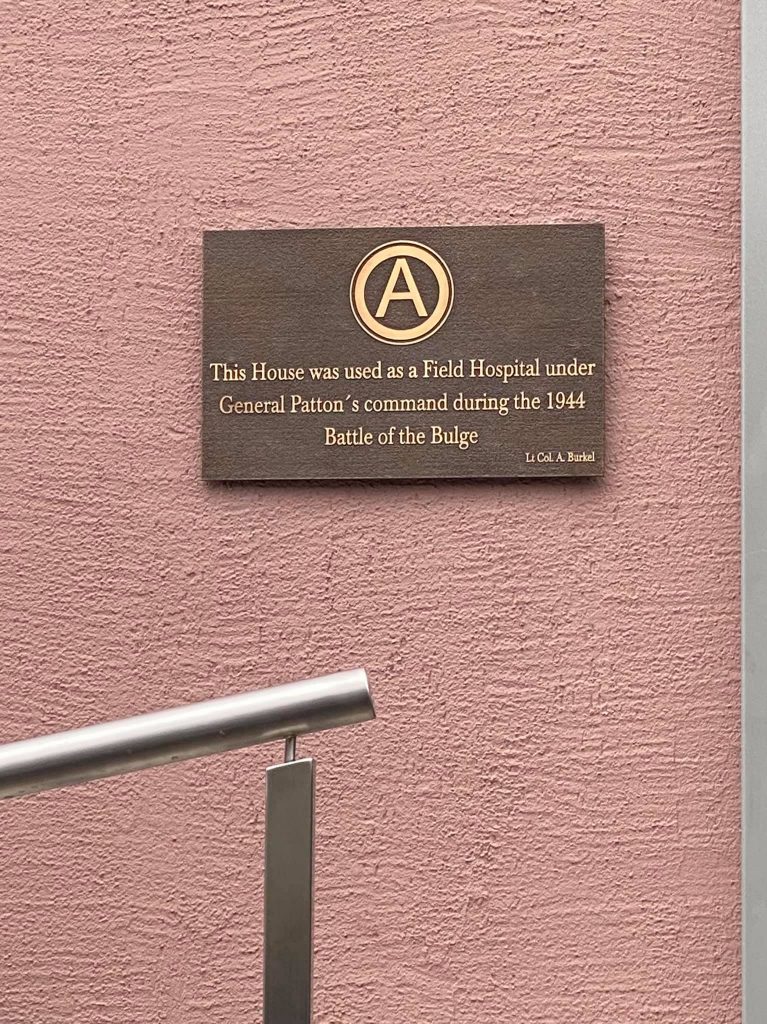 Reserve Command/CCR was ordered on Christmas Eve to move from the right flank of the division all the way west to the left flank. From here it would start its attack on Bastogne on Christmas Day, 1944. Elements of the 37th Tank Battalion and 53rd Armored Infantry Battalion reached the besieged 101st Airborne Division in Bastogne on December 26th, 1944.

One of the few recollections of the Battle of the Bulge that Joseph Korzeniowski shared with his family was about the frostbite cases in the division. He recalled men losing toes and sometimes even needed amputations of entire feet due to frostbite.

The records of the Division Surgeon show that between December 23rd and December 31st, 1944 a total of 142 frostbite cases were reported. 35 of these were reported on December 26th alone.

His son shared another recollection with me:

“The few times he mentioned Bastogne I did ask him about Patton once. He said when traveling on the road in vehicles word traveled back thru the line “Patton was up ahead on the same road”.

The temporary duty at Reserve Command/ CCR ended on January 4th, 1945. On this day he rejoined C/46, by now located in Hachy, Belgium. 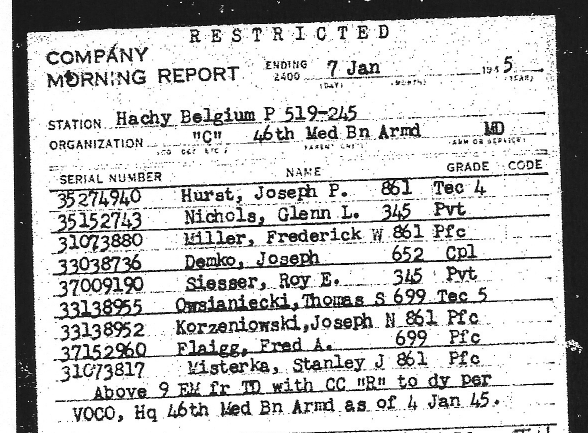 The next day Joseph Korzeniowski was granted leave to Paris: 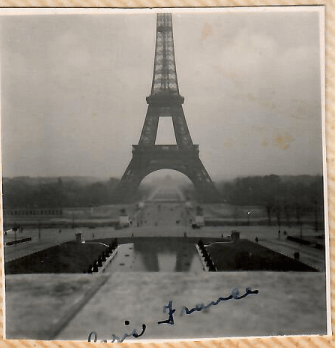 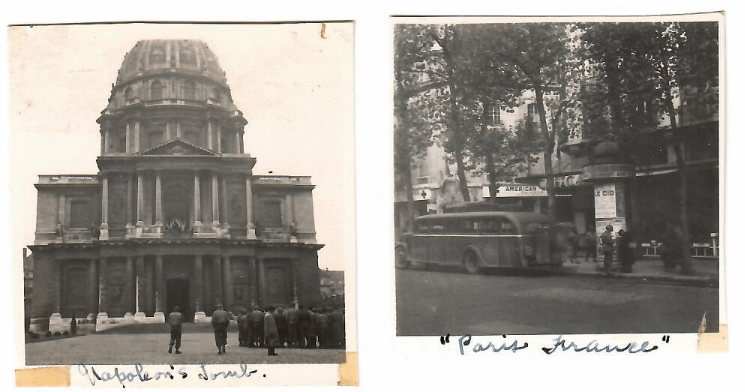 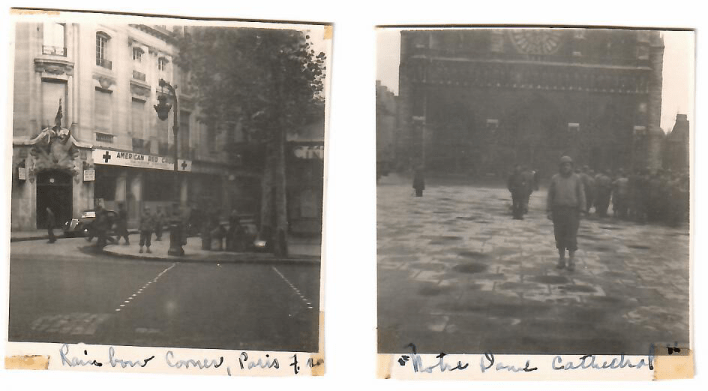 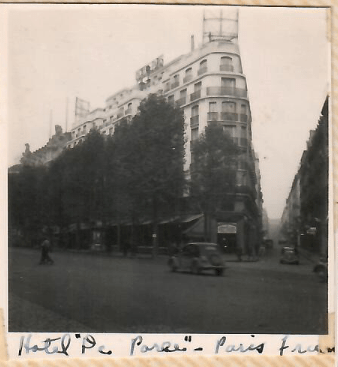 “Hotel de Paree”, where Joseph N. Korzeniowksi stayed during his leave in Paris. The building is located on the corner of the Boulevard de la Madeleine and the Rue de Seze (48.870003, 2.327716) 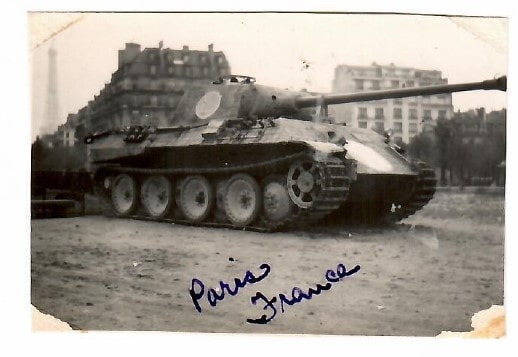 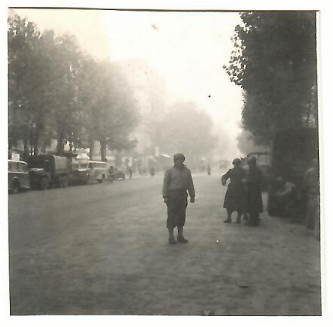 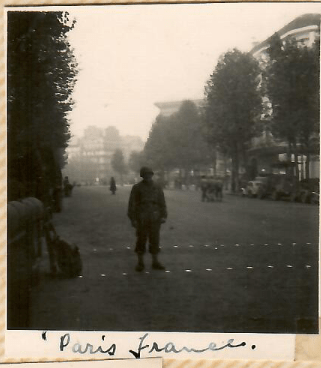 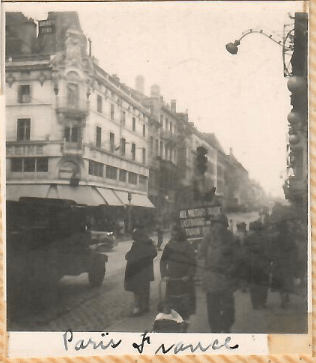 After his return to his company, C/46 together with the rest of the 4th Armored Division, was relocated to the south of Luxembourg. C/46 was located at Dudelange, Luxembourg. During this resting period, Joseph was able to visit Luxembourg City: 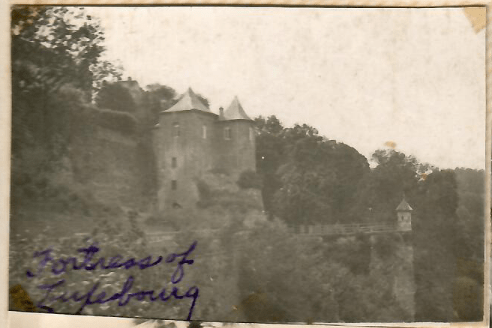 The photo was taken by Joseph Korzeniowski in Luxembourg City in 1945. The small turret on the right of the photo is called the Spanish Turret (49.612706, 6.133676) and is a part of the fortress of Luxembourg

During the stay in Dudelange, the 46th AMB received orders on January 21st, 1945 to give all vehicles, except ambulances and surgical trucks a coat of winter camouflage. This camouflage only stayed on until February 6th, 1945. By this date the snow was thawing. 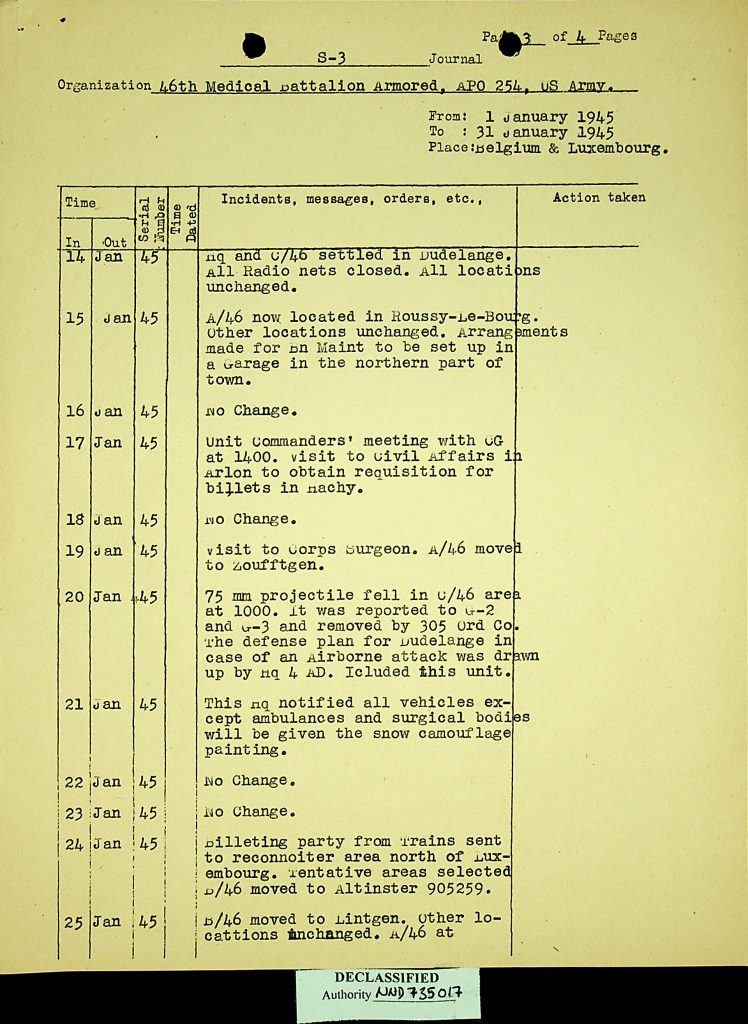 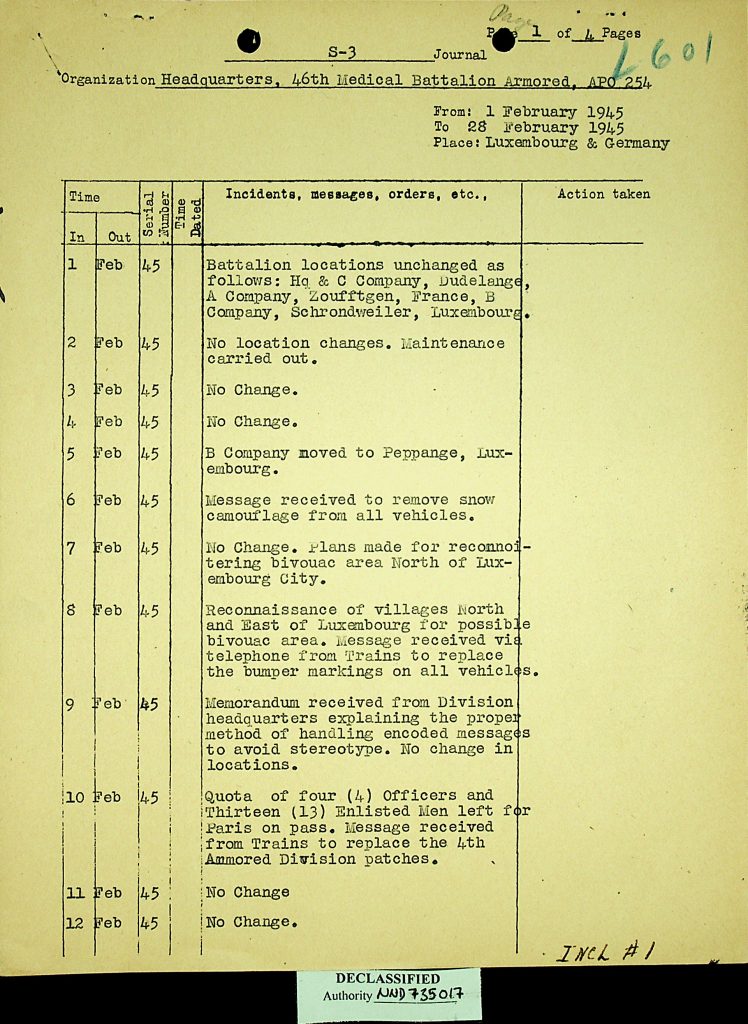 On February 23rd, 1945, C/46 moved to the Ecole Normale in Walferdange, Luxembourg and two days later moved to another school building in Ettelbruck, Luxembourg. The 4th Armored Division was ready to enter Germany for the final offensives.