This is part 4 in a multi-part series on Tec5 Joseph N. Korzenioski. He served as a Surgical Technician in Company C, 46th Armored Medical Battalion. This part will focus on the period of time the 4th Armored Division stayed in England and the first period of combat in France up to the Battle of the Bulge.

On December 22nd, 1943 the division arrived at Camp Myles Standish, Massachusetts waiting to be shipped to the UK. It left on December 29th, 1943, and arrived in England on January 10th, 1944. The battalion moved to Rood Ashton House near Trowbridge in Wiltshire: 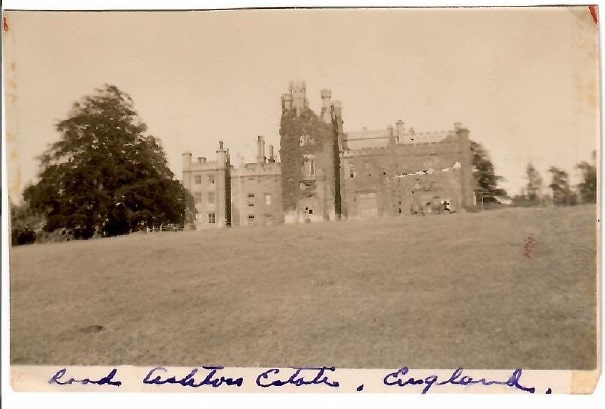 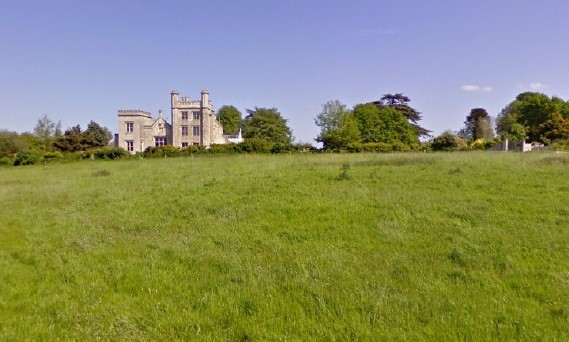 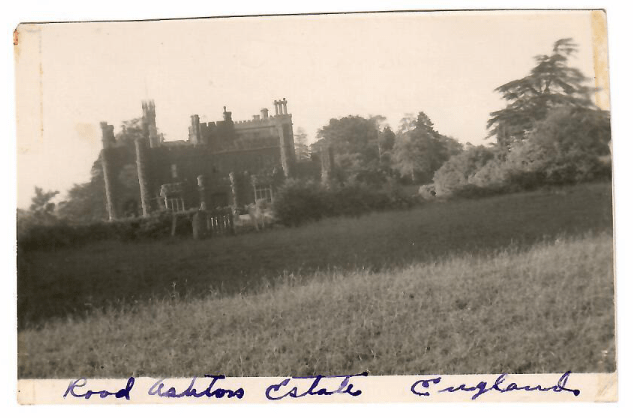 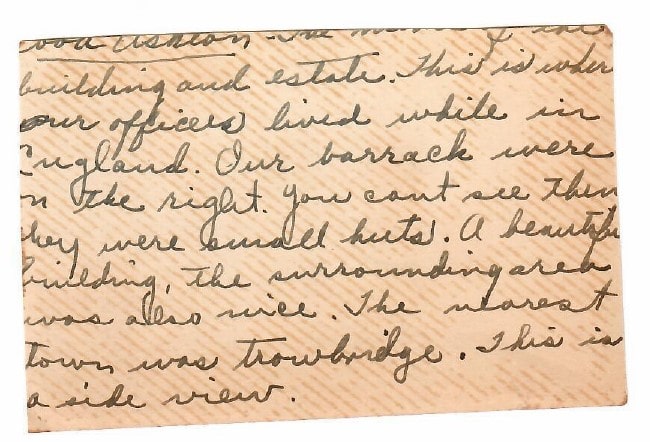 “In December 1943 I went to England with an Advance Detachment of the Fourth Armored Division. Sgt Labs and I represented the  46th Armored Medical Battalion. We were charged with selecting an appropriate site for further training of the battalion prior to the attack on Europe. Each battalion representative was given a map of an area in the south-western part of England and told to obtain housing adequate for our individual battalions.

We chose the above pictured ”castle” as we referred to it during our stay there through the winter of 1944. Besides the many rooms (the exact number now escapes me, but it was around 100) the estate consisted of a hundred or more acres of gorgeous rolling land dropping off to a tree bordered river. Behind the castle were beautiful English gardens laid out in geometric patterns with gravel walkways and hedges bordering the various planted areas. They had been well maintained up to the recent past. At the gate of the estate, great stone pillars supported heavy swinging iron gates. Immediately inside on the right stood a stone chapel with bell tower and huge oak doors and leaded windows. It was the family chapel and services were held each Sunday for anyone in the area. An Anglican priest conducted the service and was in the employ of the owner.

The owner was a Mrs. Long, widow of Lord Long. She was an American girl who was sent to England for her education in the late 1800’s, as was quite customary in those days for people of some wealth. She met and married a man who was to become a member of parliament and serve in what was known as the seat of Rood Ashton.

When we arrived, she was occupying the house with her son and two or three staff. We advised her that the American Army had been authorized to requisition the property for its use for an indefinite period. She would be well compensated for this according to arrangements that had been made by our two countries. We gave her the right to select the part of the property that would best serve her needs. She chose the central area consisting of the main kitchen area and the six nearest rooms. We occupied the balance of the castle.”

In England, the 4th Armored Division went through its final preparations for combat. The training area at the Salisbury Plains was used as often as possible.  Company C, 46th AMB supported CCB there on February 25th, 1944, and Reserve Command on March 29th, 1944.

On April 13th, 1944 the entire 46th AMB was active during a three-day field problem. C/46 supported CCA during the first phase of this exercise. During the second phase, C/46 was returned to Division Trains.

The 46th AMB was given a training area between Lacock, Wells and Gillingham. Here the collecting platoons of the battalion could train reconnaissance in unknown territory. This skill was needed to be able to bring the wounded from the battalion aid stations back to the clearing stations of the medical companies. 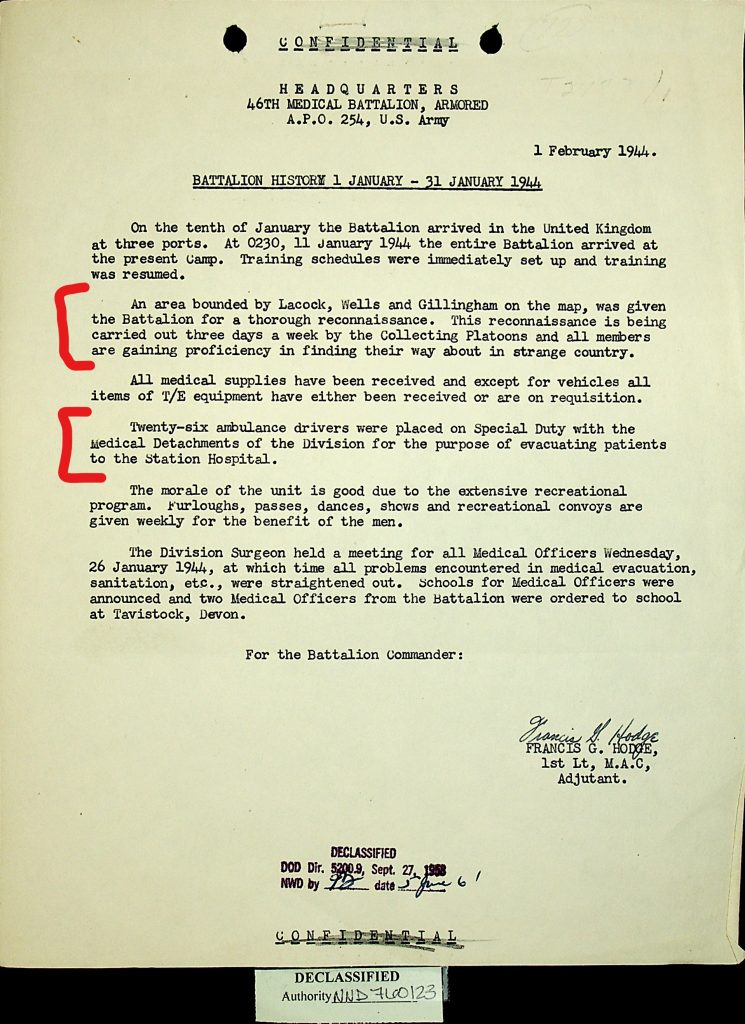 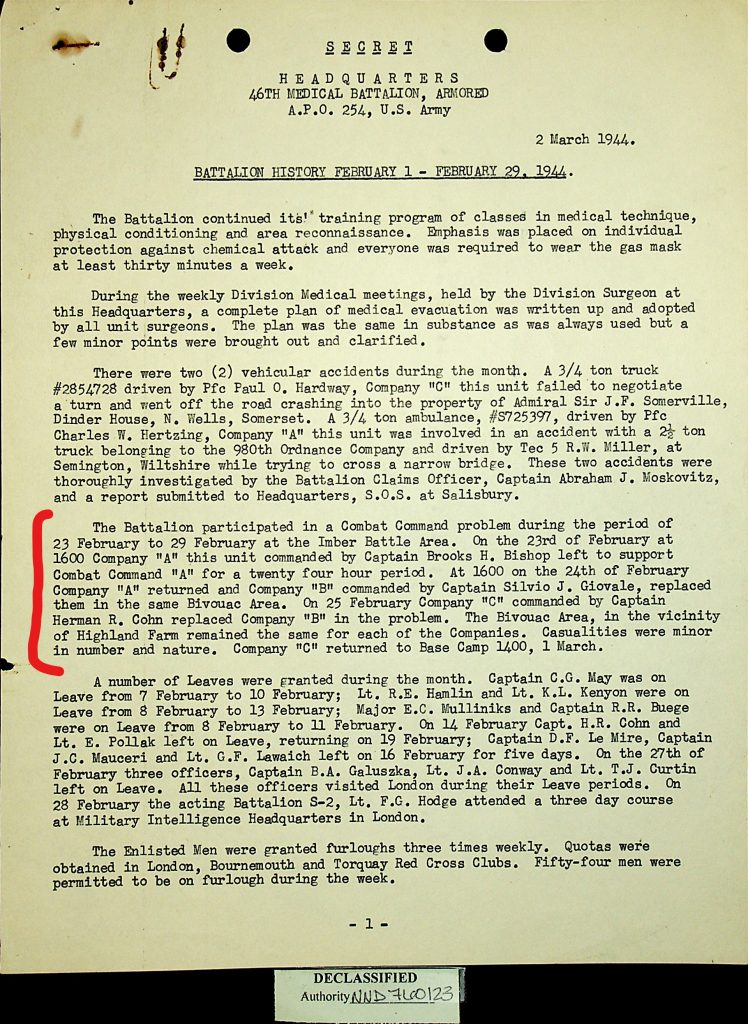 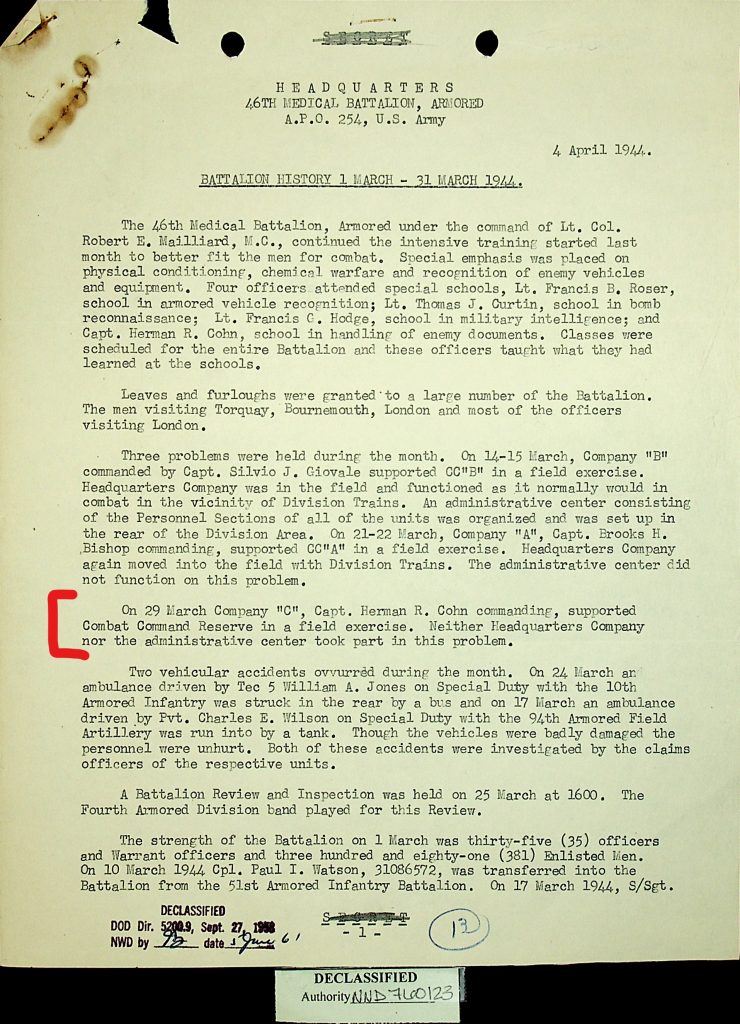 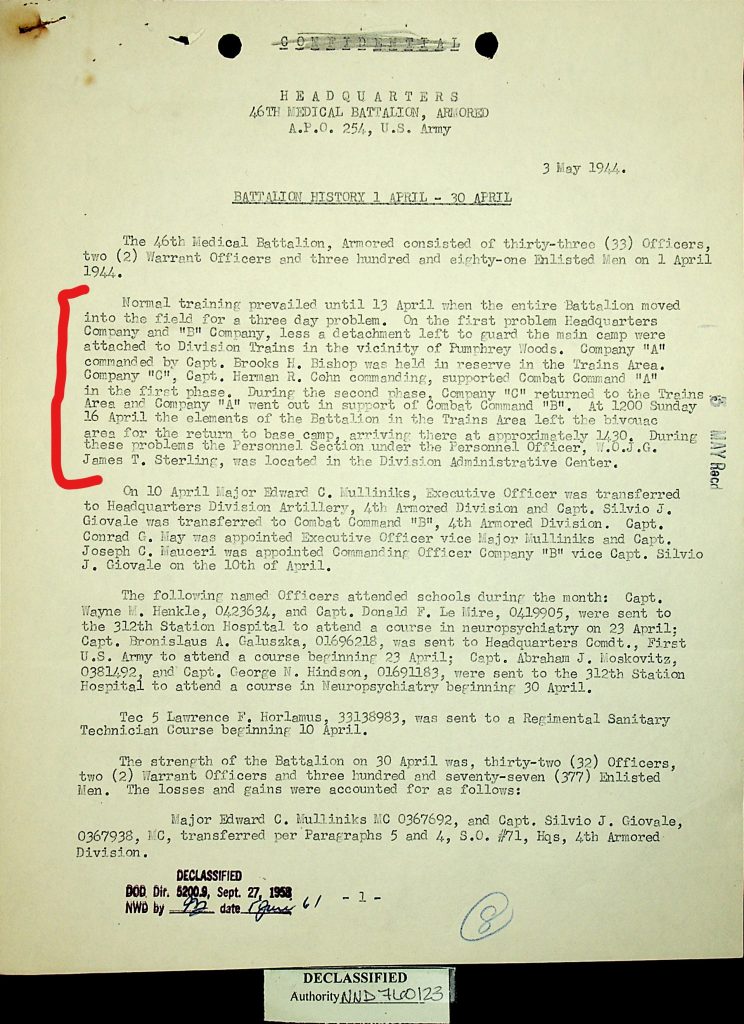 In early June 1944, Joseph Korzeniowksi was on TD (temporary duty) with the 66th Armored Field Artillery Battalion as an ambulance driver. The 66th AFAB was on final training at the Imber / Tilshead Dows Range (part of the Salisbury Plains training area). 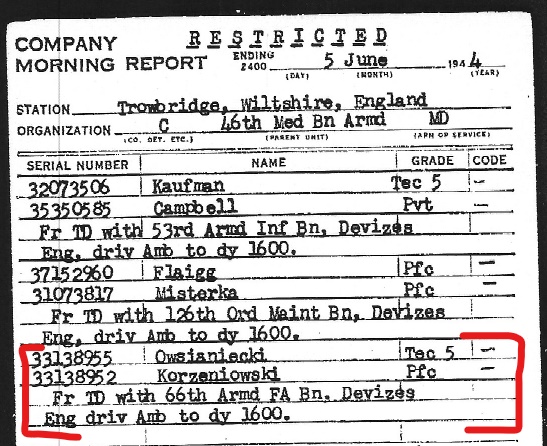 The 46th AMB was alerted for movement to France in early July 1944. Company C left for the Marshalling Area on July 10th 1944 and left this area for embarkation on July 13th, 1944. 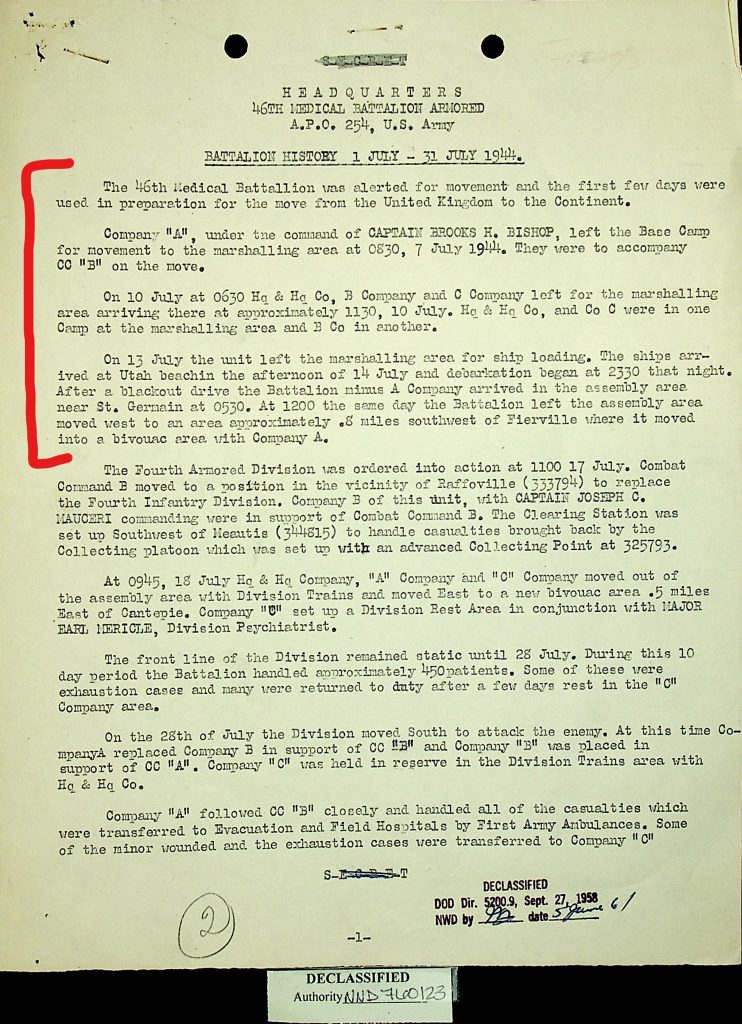 Joseph Korzeniowski, with his company, arrived at Utah Beach on July 14th, 1944. The company disembarked during the night. After a brief stay on the west coast of the Cotentin Peninsula, the company moved to the area near Cantepie, France. Here, it set up its Clearing Station for the first time: 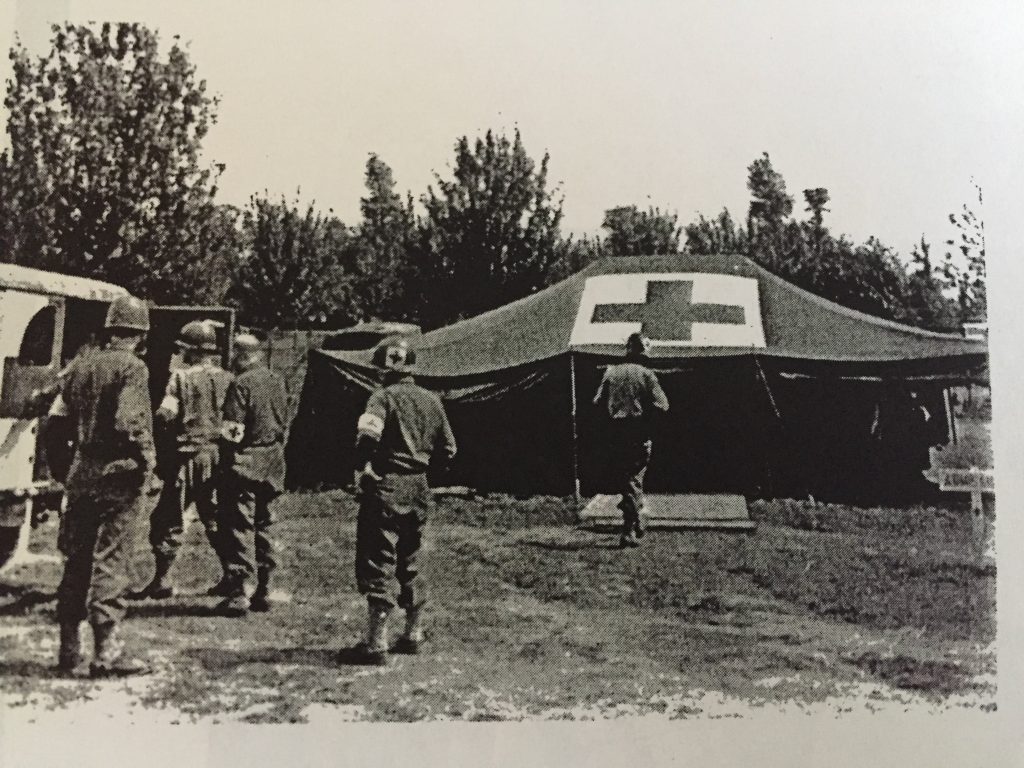 During the breakout and the race across France Company C, for a short period, was the supporting medical company for CCB. But for most of the time that the 4th Armored Division was in combat, C/46 was the Reserve Medical Company attached to Division Trains. It provided second echelon medical services to the men of Reserve Command and Division Trains. It also acted as a relay point for ambulances coming from A/46 and B/46 and took over many of their casualties who could remain with the division for treatment. The third role that C/46 played during the operations in the ETO was of Auxiliary Treatment Center. Here most of the division’s combat exhaustion patients were treated to prepare them to return to duty.

The final role of the Reserve Medical Company was to provide the frontline medical detachments and medical companies with emergency replacements and support.

One instance where this role was extremely important was on September 24th, 1944. On this day the battalion aid station of the 51st Armored Infantry Battalion (assigned to CCB at the time and located near Fresnes-en-Saulnois, France) was hit by German artillery. Of the enlisted men of the Medical Detachment/ 51st AIB present, 10 had to be evacuated for wounds or combat exhaustion. Three enlisted men were killed in action. All three officers were wounded by artillery shrapnel. Two of them had to be evacuated. Captain Caravona, MC later died of his wounds. This left only Captain Jesse Austin, MC, and 7 enlisted men at the battalion aid station. It was the blackest day for the MD/51.

Immediately, replacements were sent to the battalion aid station and additional support was provided by the medics of C/46.

Joseph Korzeniowksi received a letter of commendation on October 23rd, 1944 for his actions in support of CCB near Fresnes-en-Saulnois around September 24th, 1944: 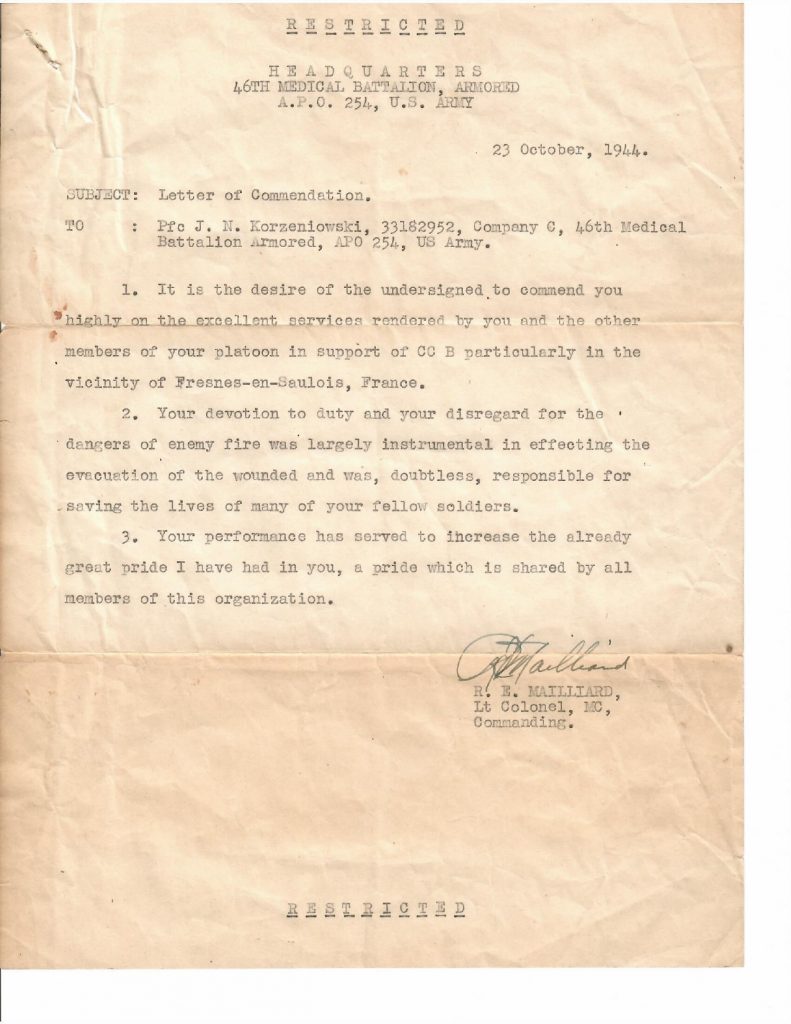 On the same day that the actions near Fresnes-en-Saulnois took place, the Certificate of Merit received by Tec5 Korzeniowski was dated. Is was signed by Major General Hugh Gaffey, who became commanding general of the 4th Armored Division after December 3rd, 1944, when Major General Wood was relieved of command. This cerificate must have been given to Joseph after this date. 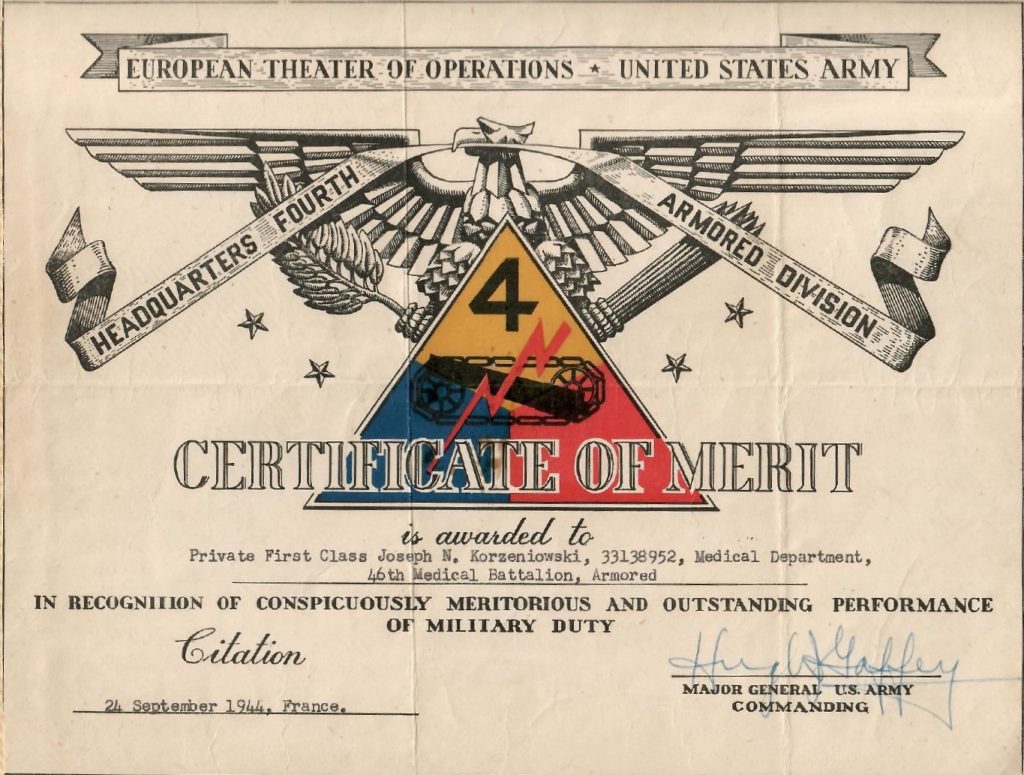 In October 1944, in a brief period of rest for the division, passes to Nancy were authorized for 5% of the personnel of every battalion. From the photos in the collection, we can see that Joseph Korzeniowski was one of the men who received such a pass: 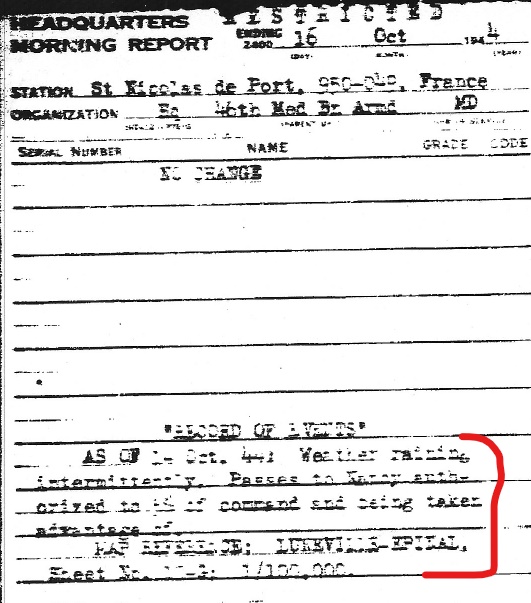 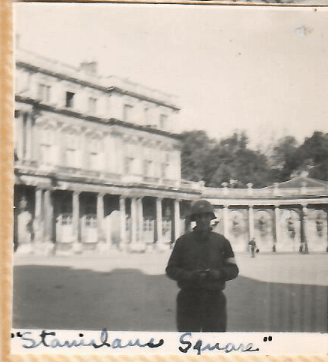 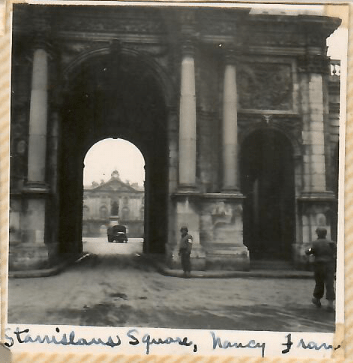 During the later part of the Lorraine Campaign of November and early December 1944, C/46 stayed in one of the barracks at the military camp in Dieuze, France (from November 25th onwards): 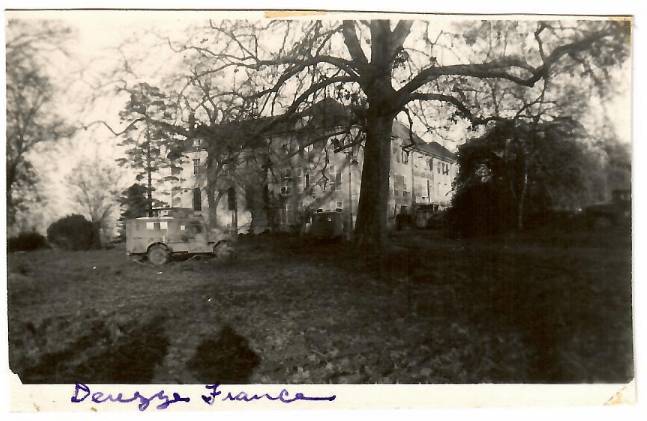 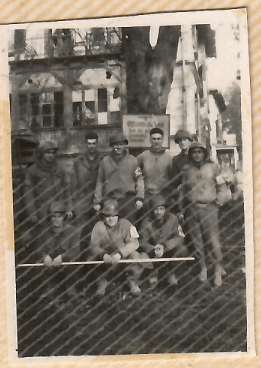 In the collection of photos, several other photos have France written on them. From the muddy streets shown in them, I believe that they were also taken in Lorraine, possibly in Dieuze or Dombasle: 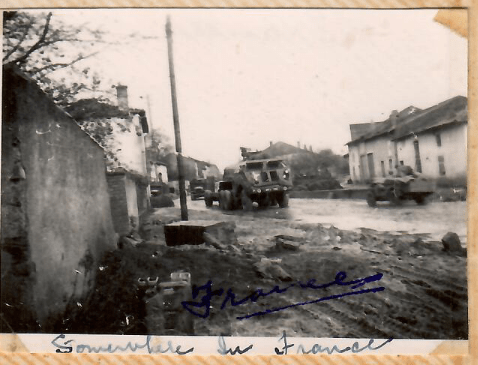 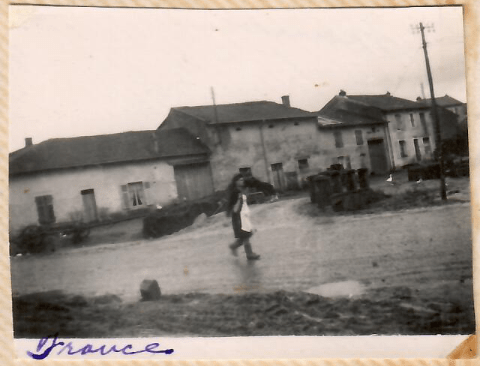 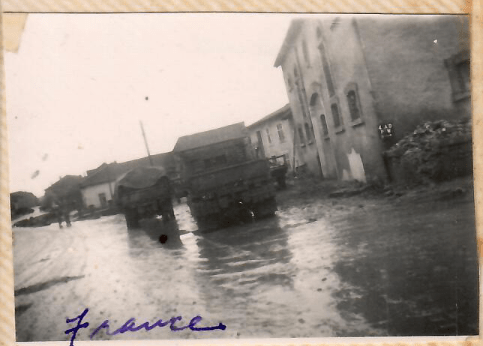 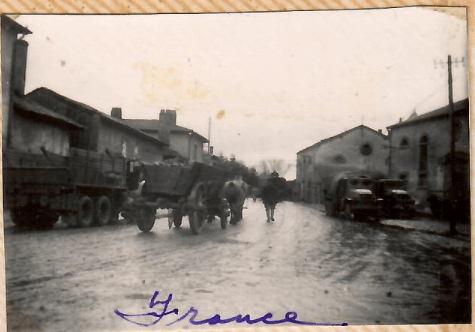 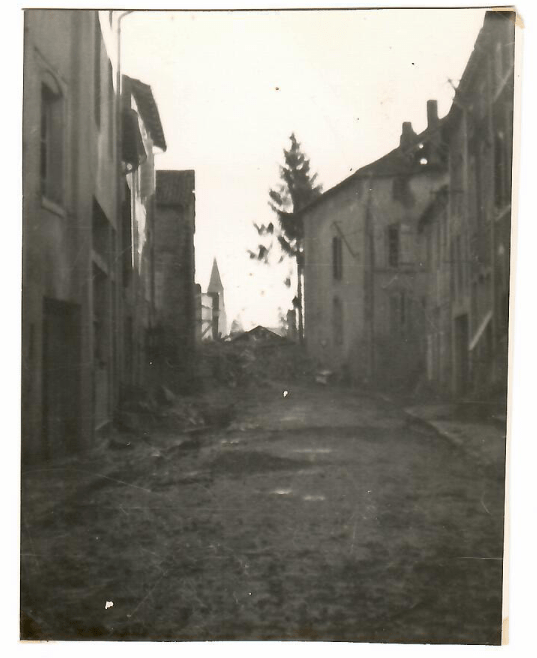 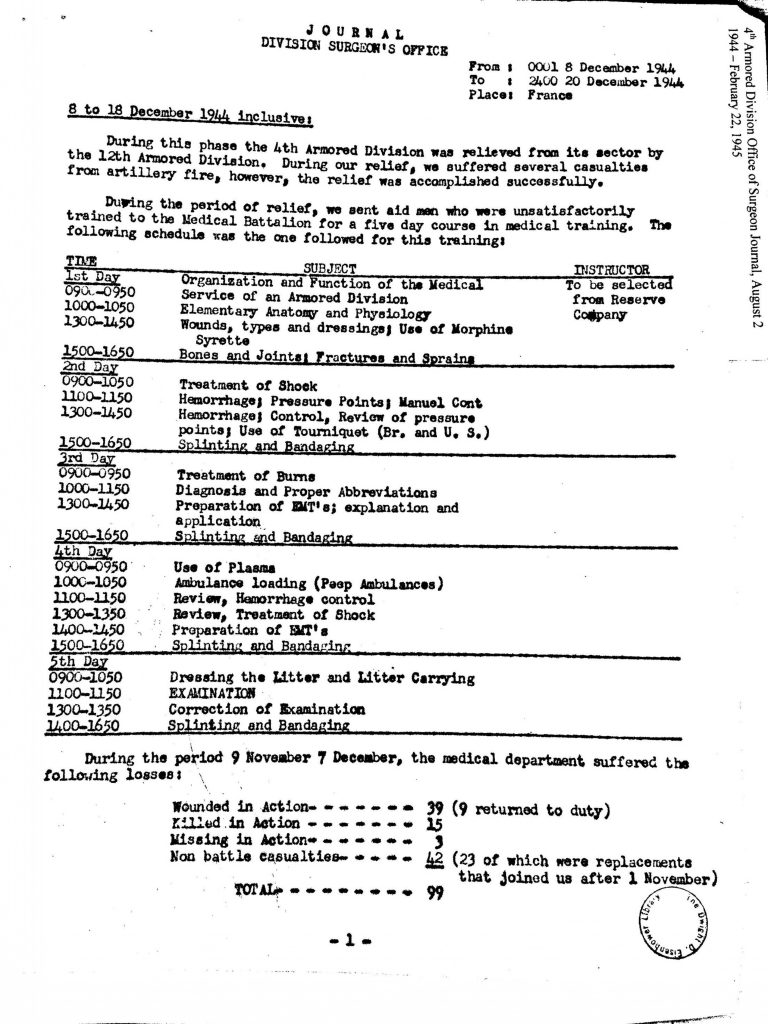 Everybody in the division would need all the rest and training they could get. The next mission for the division and its medics would be to break the siege of Bastogne during the Battle of the Bulge. This, and the offensives across Germany will be the topics for the next part.