This is part 2 of a multi-part series on Tec5 Joseph N. Korzeniowski, who served in Company C, 46th Armored Medical Company, 4th Armored Division during WW2. In this series I tell his story using the fantastic photos that he took during his service. Part 1 focussed on his induction into the Army and his basic training at Fort Knox, KY. In part 2 Joseph Korzeniowski joins the 4th Armored Division at Pine Camp, NY and for training and joins the division during the Tennessee Maneuvres. 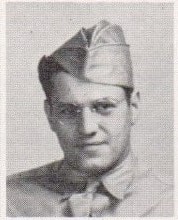 After completing his training at the AFRTC, Joseph Korzeniowski, together with a group of replacements, was sent to Pine Camp, New York to join the 4th Armored Division.

I don’t know the exact date that he joined the 46th Armored Medical Battalion. His 1942 yearbook has a certificate that states that he was part of Company C as of September 24th, 1942: 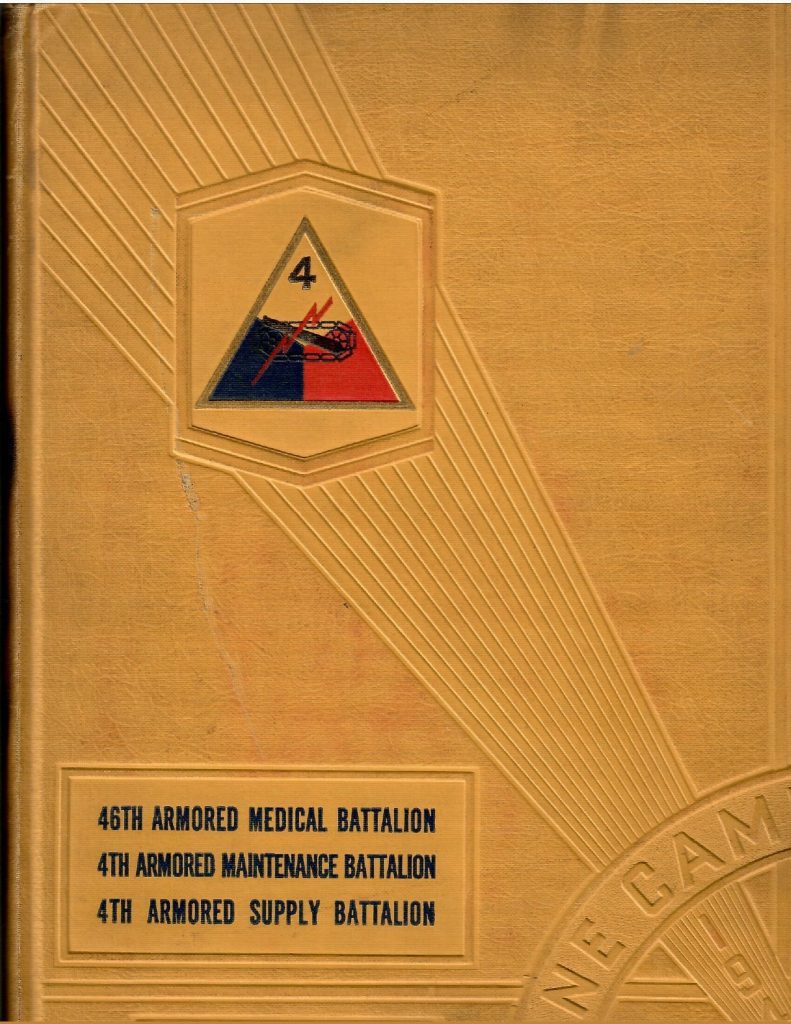 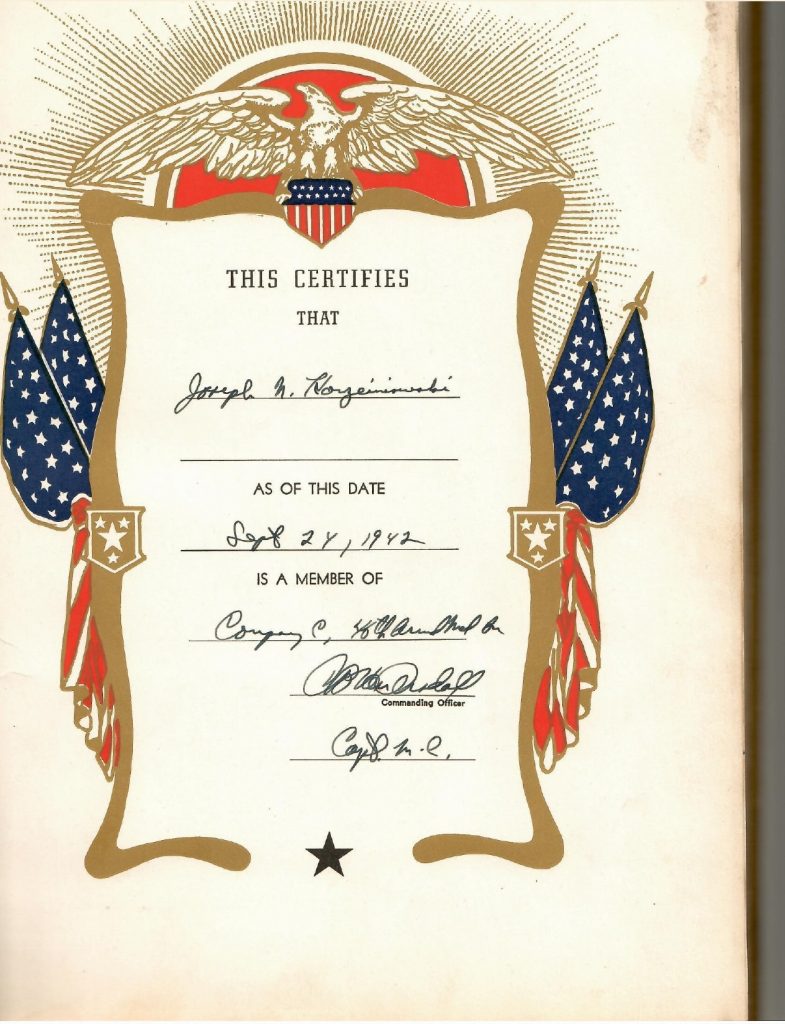 I believe he joined before this date. His photo is in this yearbook. The commanding officer of the 46th AMB is shown to be Major Perlman: 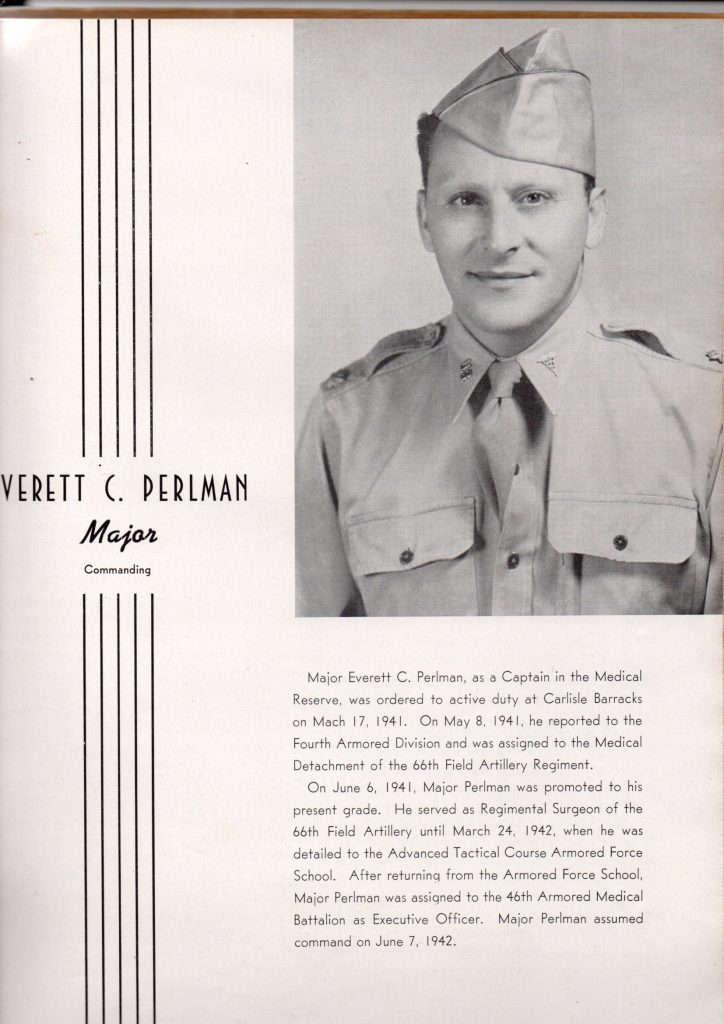 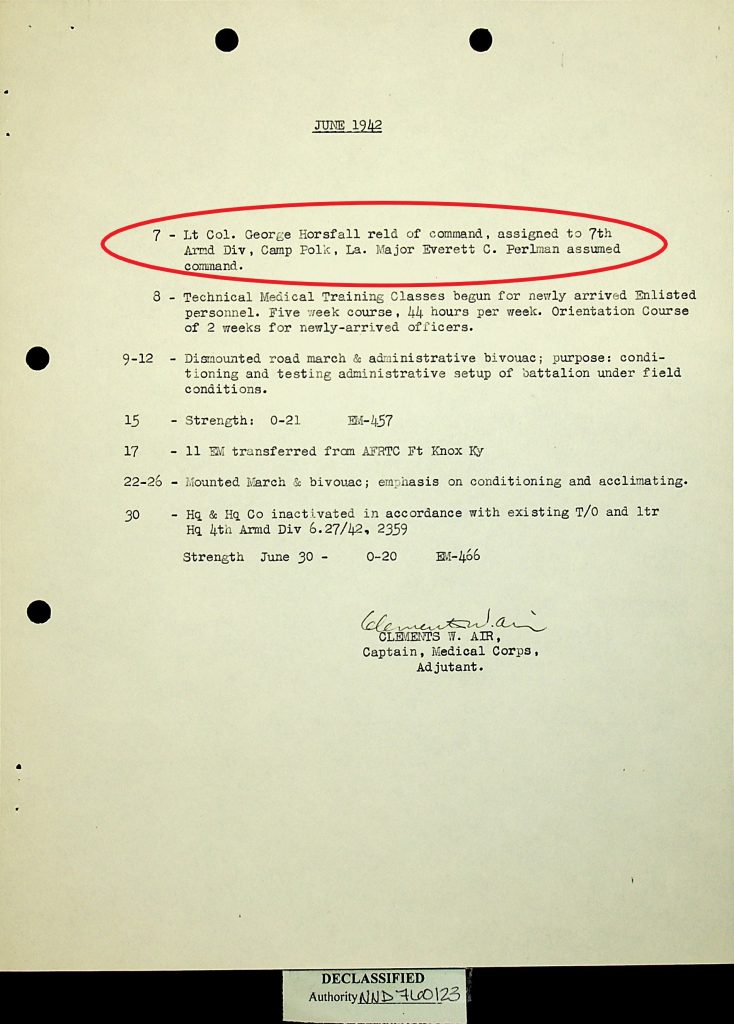 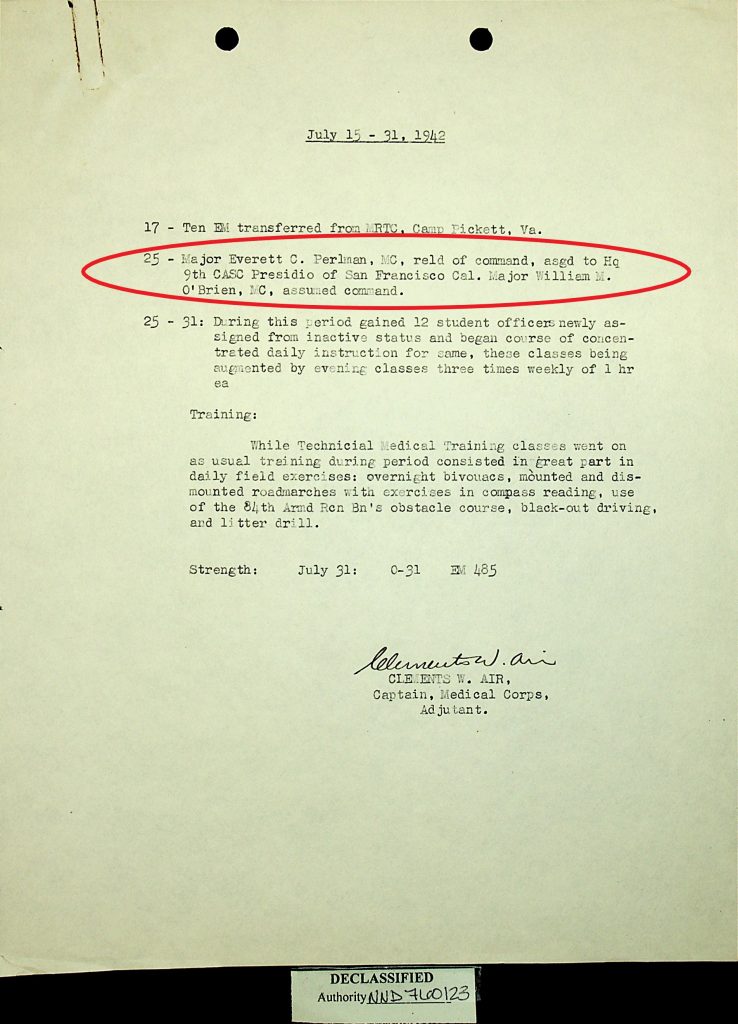 So the photos for the yearbook, including the photo of Joseph Korzeniowski, were most likely taken between June 7th and July 25th, 1942. The yearbooks were probably presented to the men in September 1942, after the certificates were signed. 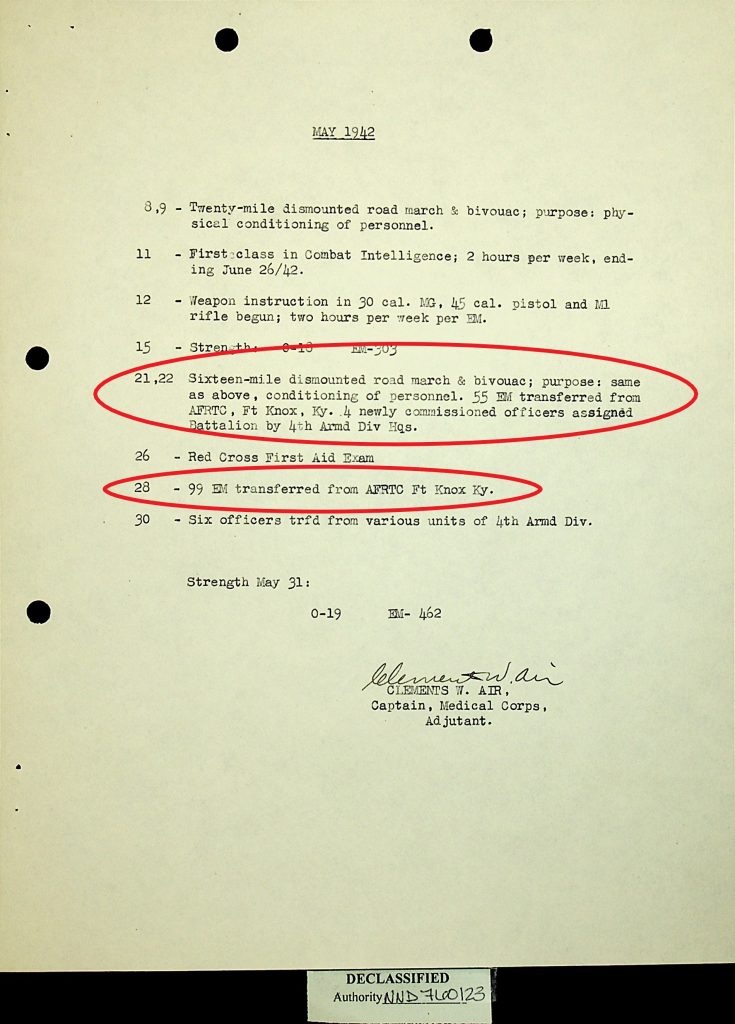 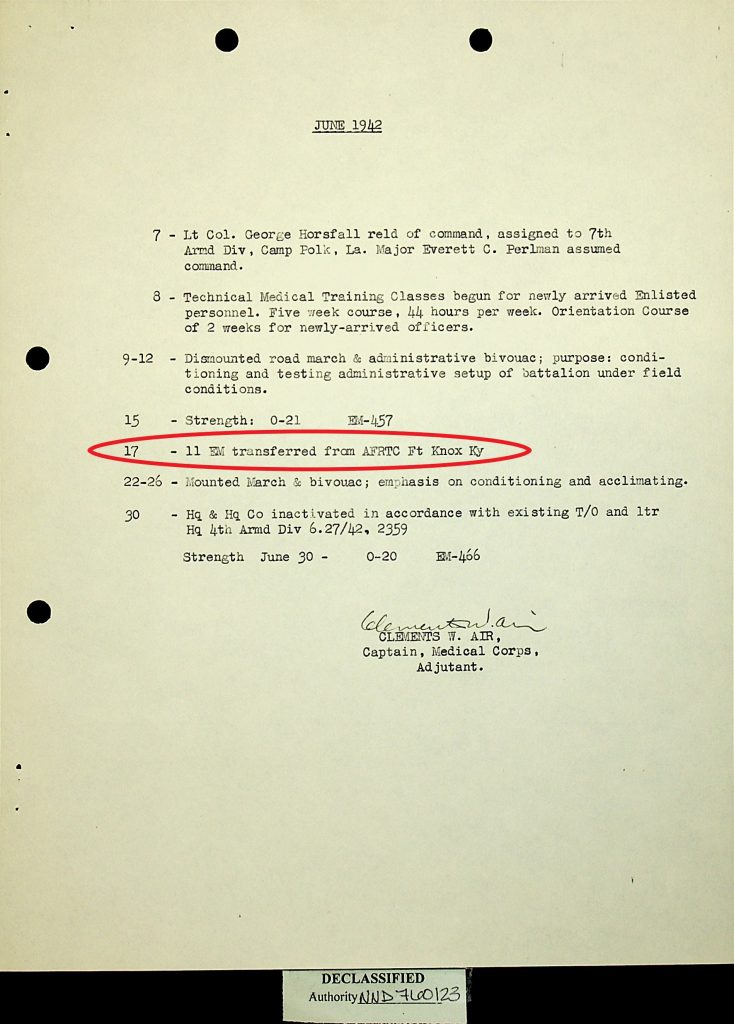 I believe that Joseph Korzeniowski was part of the first two groups and based on the size of the group in the photos taken at Fort Knox at his departure I would say that he was part of the group of 99 men joining the 4th AD on May 28th, 1942. This would fit with a finished basic training of 12 weeks at the AFRTC. 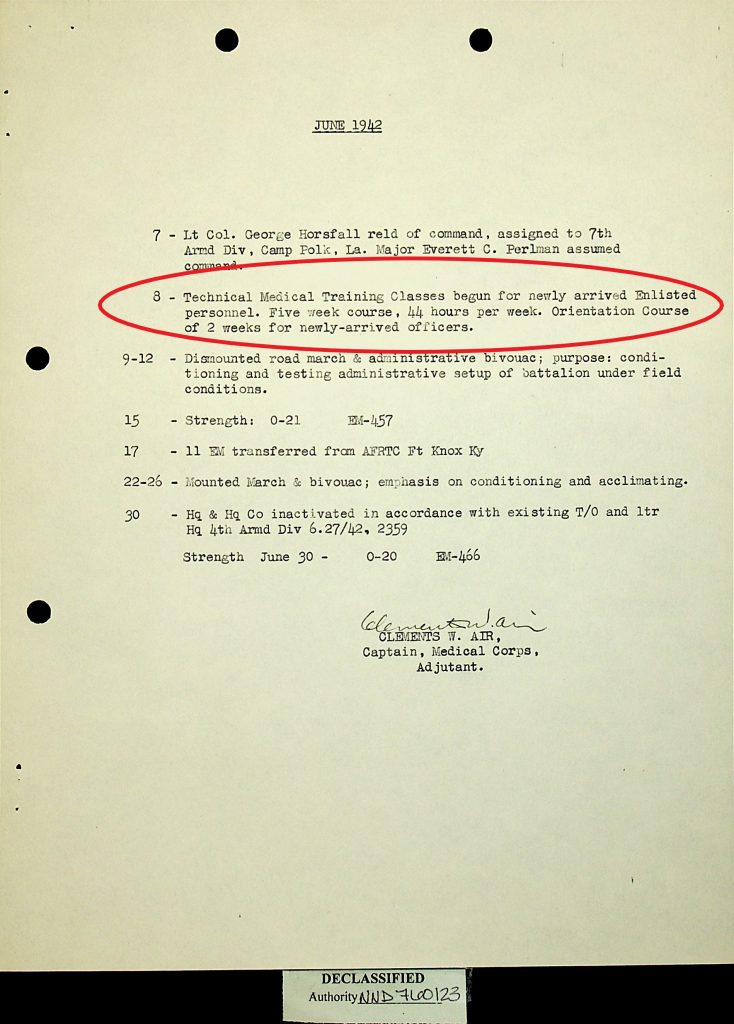 Between June 1942 and September 1942, Joseph Korzeniowski trained at Pine Camp, NY with Company C, 46th AMB. His yearbook shows the names of many of the men he served with at Company C. The Battalion History for this period shows us some of the activities of the battalion. 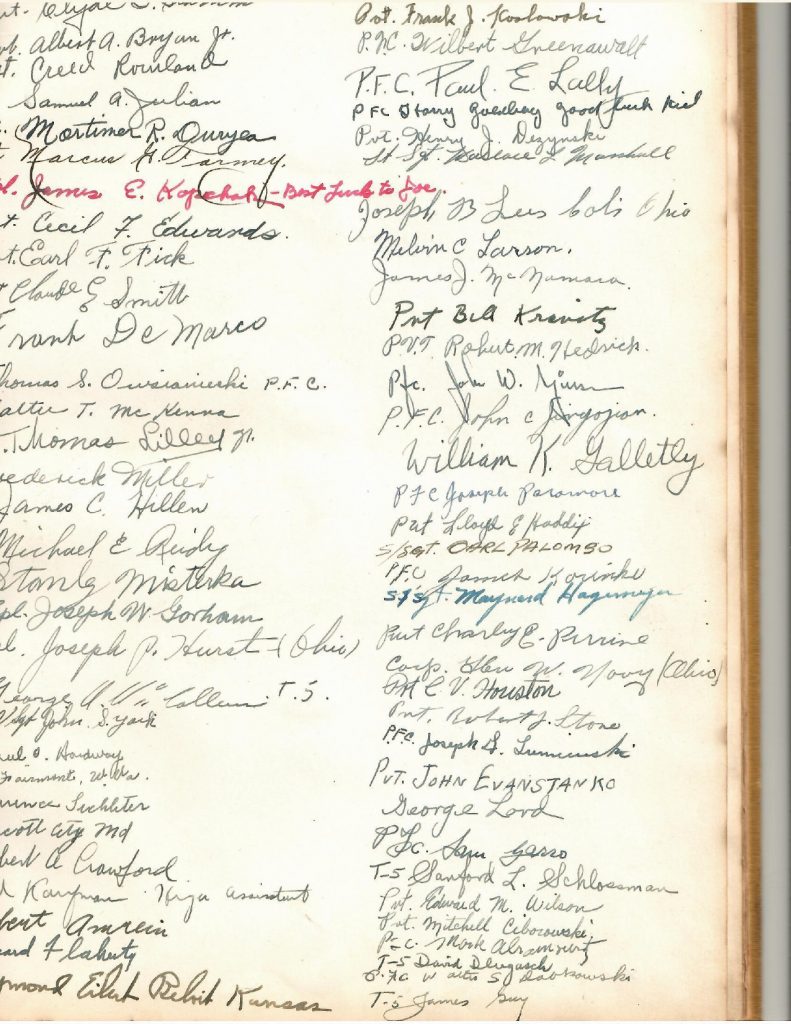 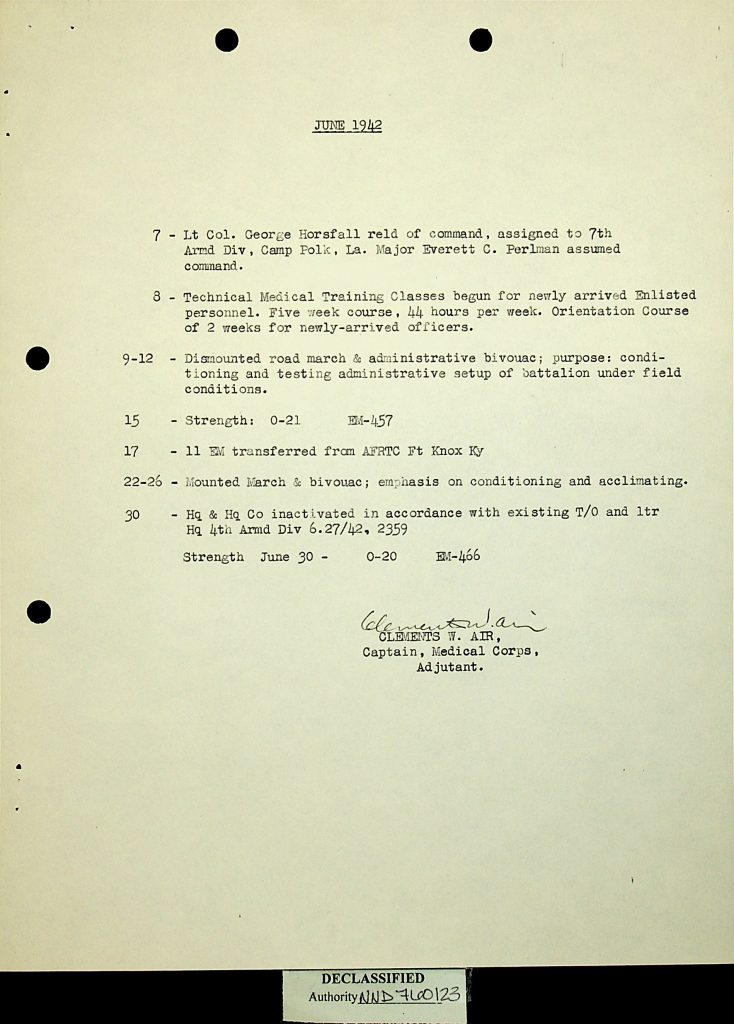 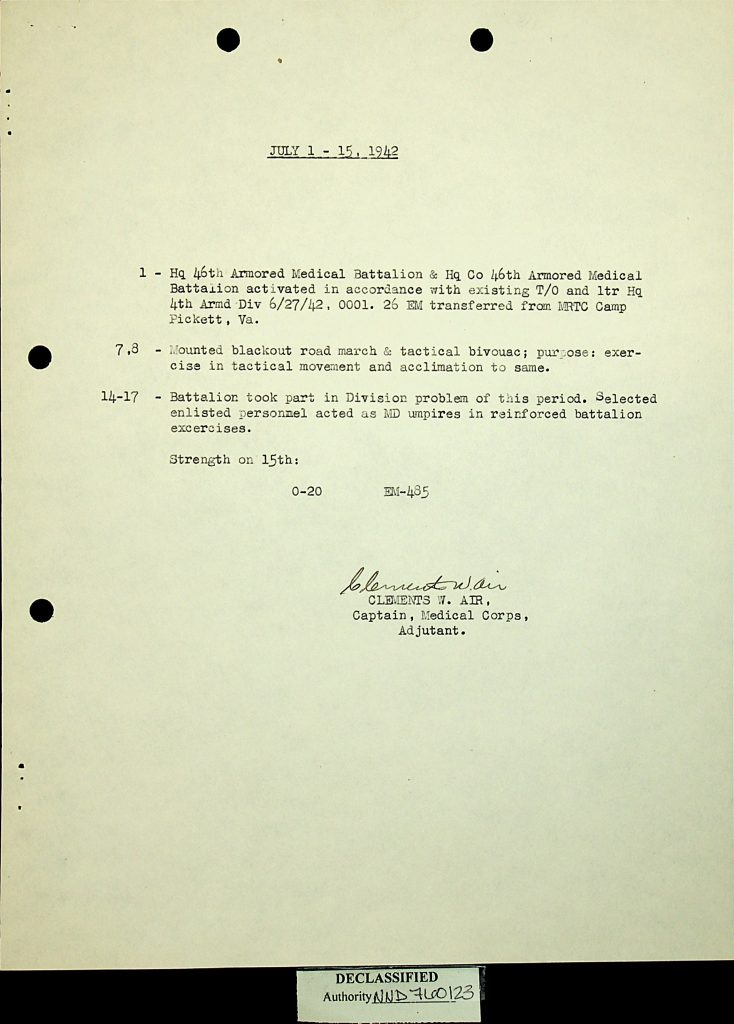 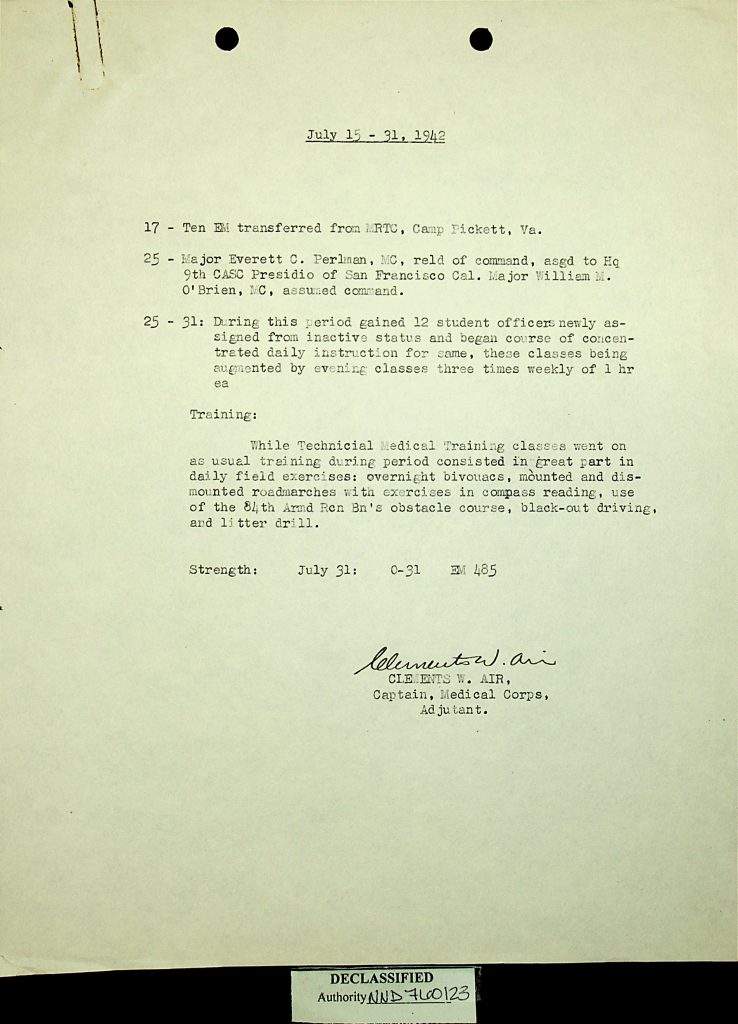 Joseph Korzeniowski took some wonderful photos during his stay at Pine Camp, NY. 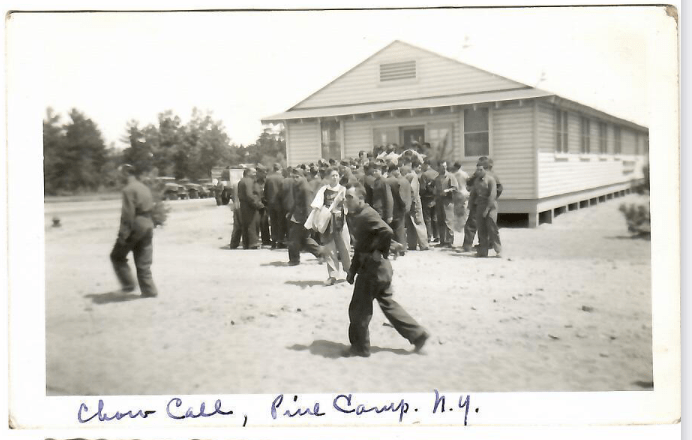 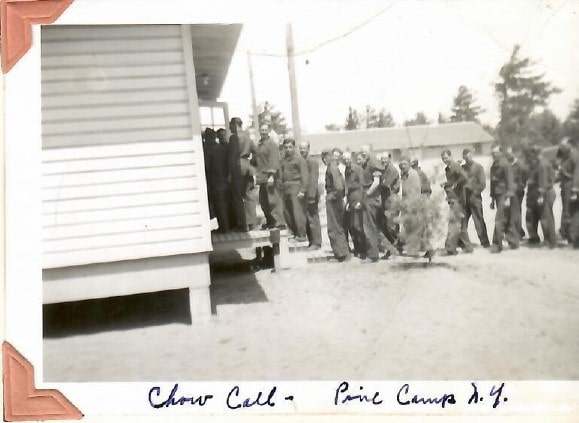 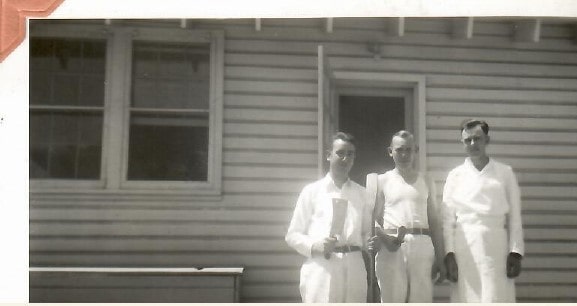 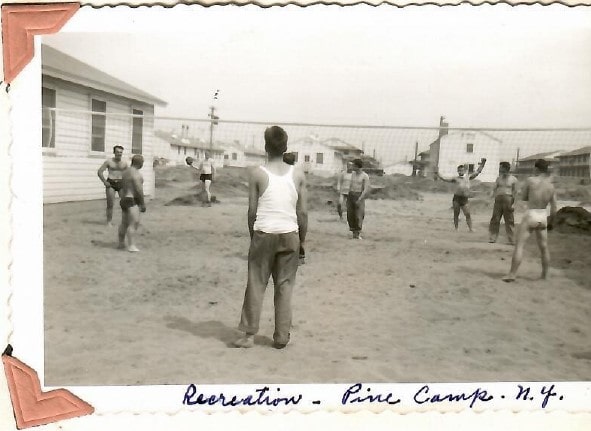 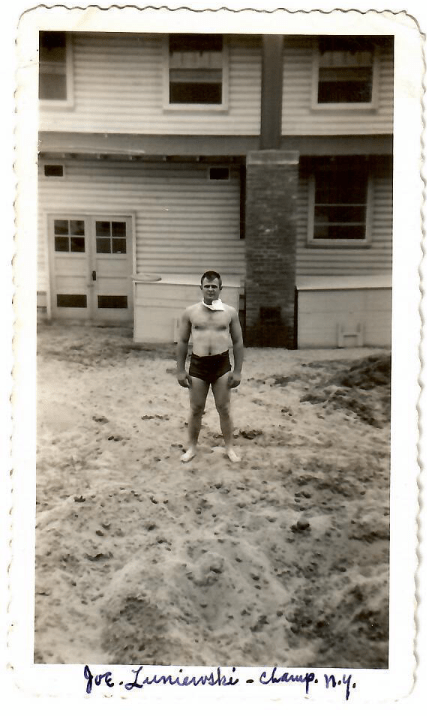 Joseph G. Luniewski (32191381). He trained with C/46, but was transferred to A/46 before the battalion shipped to England. He served as a Litter Bearer (MOS 657). Between September 19th, 1944 and October 1st, 1944, he was on temporary duty with the medical detachment of the 53rd AIB. He was assigned to the medical detachment of the 51st AIB on November 1st, 1944. On November 17th, 1944 he was lightly wounded in action (LWA) but remaind on duty. On February 7th, 1945, he was again wounded in action. This time he was evacuated to the Collecting Company of the 305th Medical Battalion (80th Infantry Division) 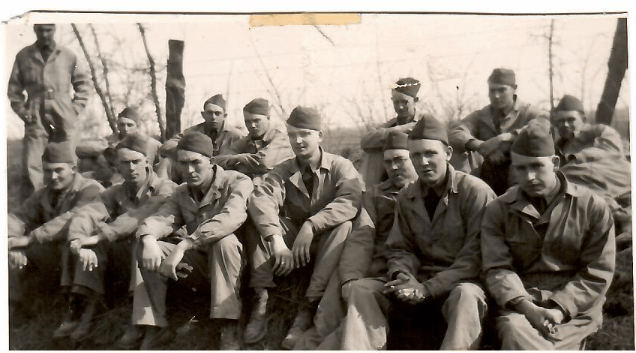 Group photo during a march 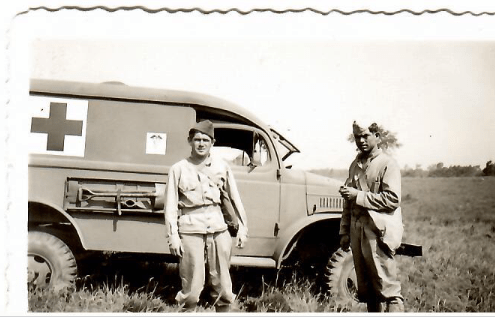 Photo showing Thomas S. Owsianiecki (33138955) on the left and Wilber R. Jones on the right. Owsianiecki stayed with Company C, 46th AMB during WW2. I have no record of Jones after 1943. Perhaps he was tranferred out as cadre for a new division or during the reorganization to a “light” armored division in September 1943 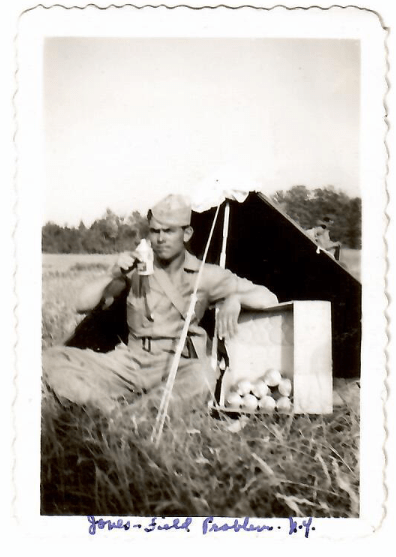 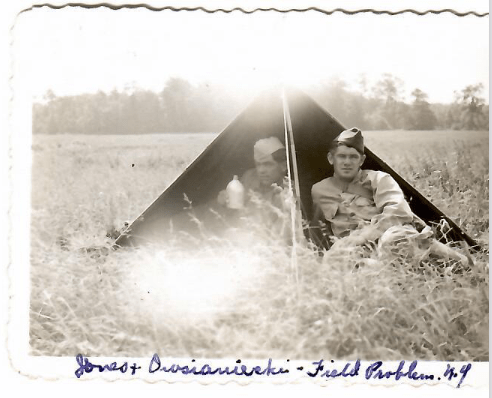 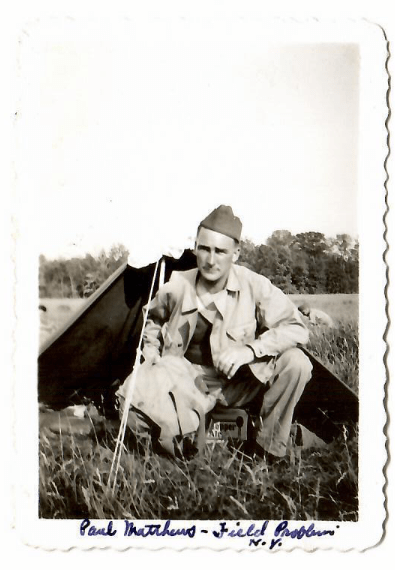 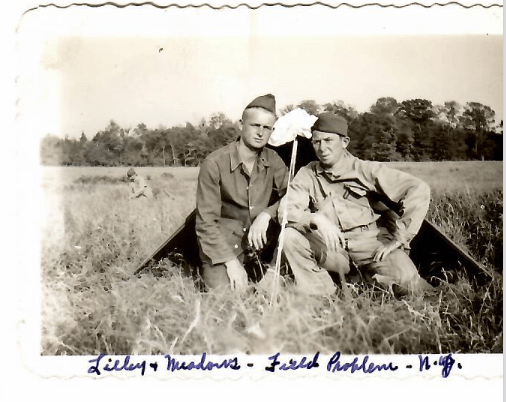 Lemuel T. Lilley Jr. and Delma W. Meadows (34178838). I have no record of Lilley after 1942, so perhaps he was transferred as cadre to another division. Meadows stayed with Company C, 46th AMB. He was wounded in action on September 12th, 1944, but remained on duty 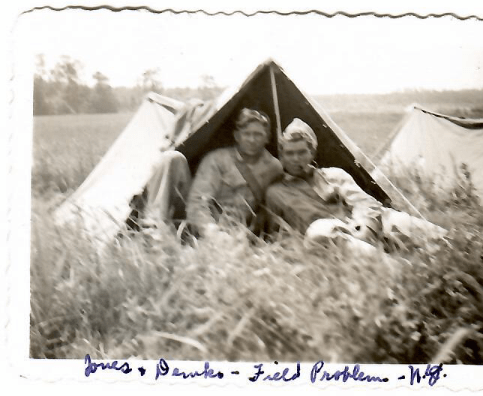 Between September 1st and October 13th, 1942 the 4th Armored Division took part in maneuvers in Tennessee.  There are no photos in the collection, but the 46th AMB history shows that the battalion took part in “Division problems” or training exercises for the entire division.

It was during these maneuvers that the 4th AD gained a reputation for speed and agression. In fact the Commanding General of the maneuvers, General Ben Lear, became very angry with the division because he believed that the speed with which the division operated thus finishing the problems days ahead of schedule was “unrealistic”. Maj. General John S. Wood, CG of the 4th AD defended his division and his men so energetically that it bordered on insubordination. It forged the bond between the division and Wood. From then on, no matter who commanded the division, the men would always be Wood’s men. They continued to operate in the way he had trained them. 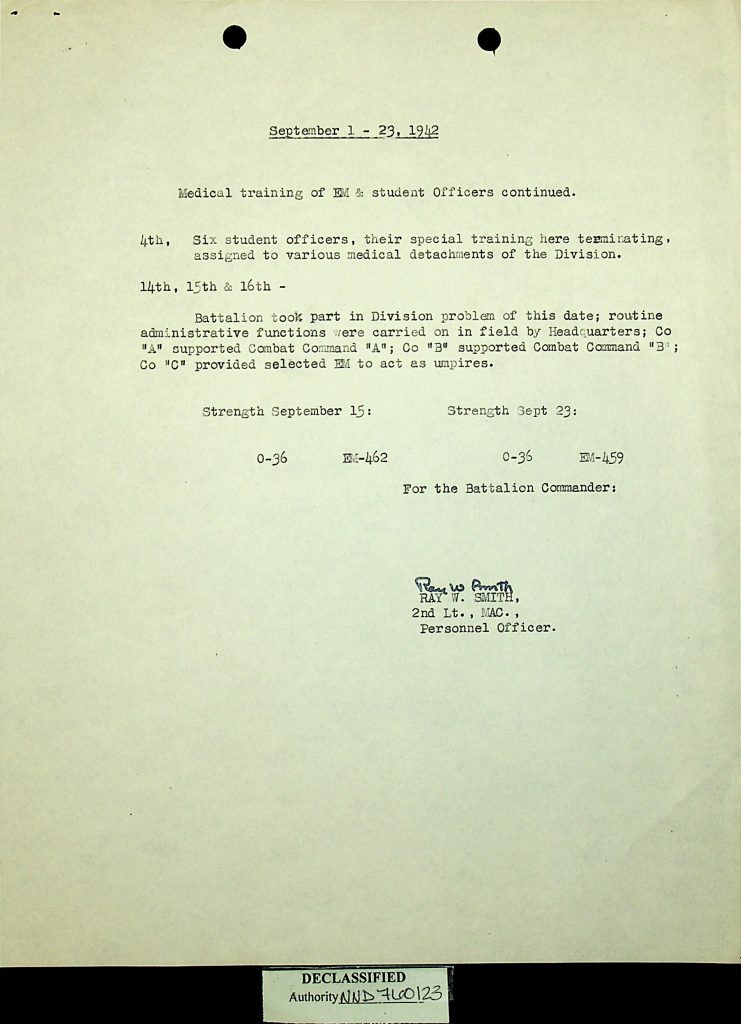