One of the things I love about doing historical research is the excitement of receiving new documents. Every time I have received or found new documents I felt like I am going on a treasure hunt! And just like a real treasure hunt, sometimes you find things that are not all that exciting. But then there are times you find information that really gets your heart rate up.

One of the sets of documents I received during my research was the set of messages from the 46th AMB.

Sorting them and then reading them was another treasure hunt moment! Sometimes reading the messages felt like traveling back in time. And the wonderful thing about messages is that you can actually follow a discussion as it was conducted during WW2. With a little imagination, you can picture yourself in the headquarter tents of the different companies and watch these messages being dictated, coded, and send.

What I would like to do here is to take you back in time. Back to March 19th 1945. Let’s look at the messages of this day and watch the story unfold. The story of 50 American POWs liberated by the 4th Armored Division.

In March 1945 the 4th Armored Division was fighting in what became known as the Palatinate Campaign. The Third Army was ordered to fight its way south from the Mosel River in the vicinity of Koblenz, across the Hunsruck area towards the Rhine River between Mainz and Worms. The objective of this campaign was to trap the German 7th Armee west of the Rhine.

On March 18th 1945 the 4th AD was moving to capture the city of Bad Kreuznach, on the Nahe River.

CCA was encircling the city from the north. CCB was moving to close the trap from the south and then captured the city.

The units fighting in CCB that day were the 10th AIB and the 37th TB. According to the 4th AD After Action Report, they finished clearing the city at 1200h. What I am going to look at is the story of the 50 American Prisoners of War (POWs) liberated that day as mentioned in the AAR.

The hospital they were liberated from was the “Reservelazarette Bad Kreuznach” used during the War by the Wehrmacht. After the war, the US Army used it for many years (for a brief period it was also used by the French Army). The buildings have been torn down in 2009. 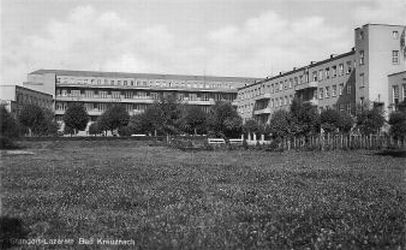 As soon as possible they would have been evacuated by the Collecting Platoons of the supporting Medical Company. On March 18th 1945 the medical company supporting CCB was Company B, 46th AMB. The Clearing Station of B/46 had moved from Huffelsheim to Frei-Laubersheim that day. It arrived at 15.30h and was ready to receive casualties a mere 15 minutes later! 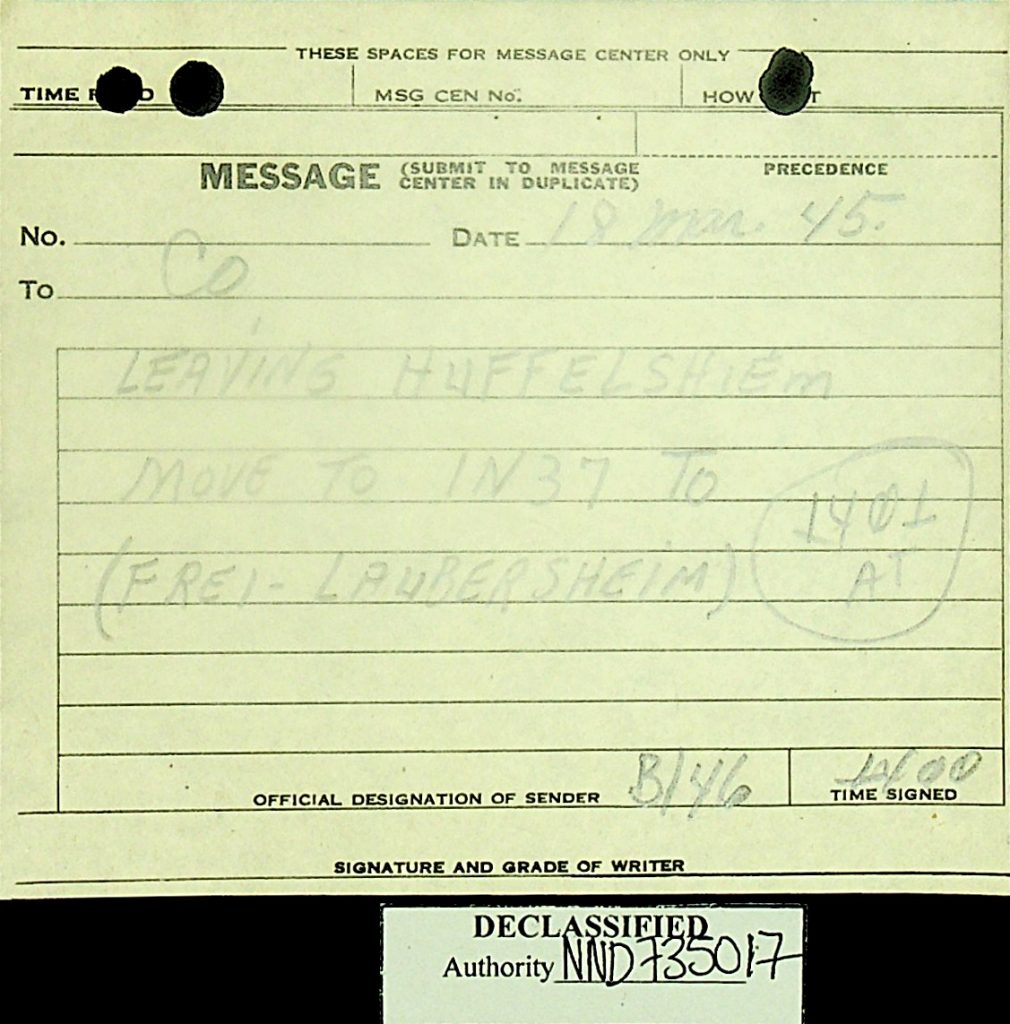 This is where the messages start to tell their story. 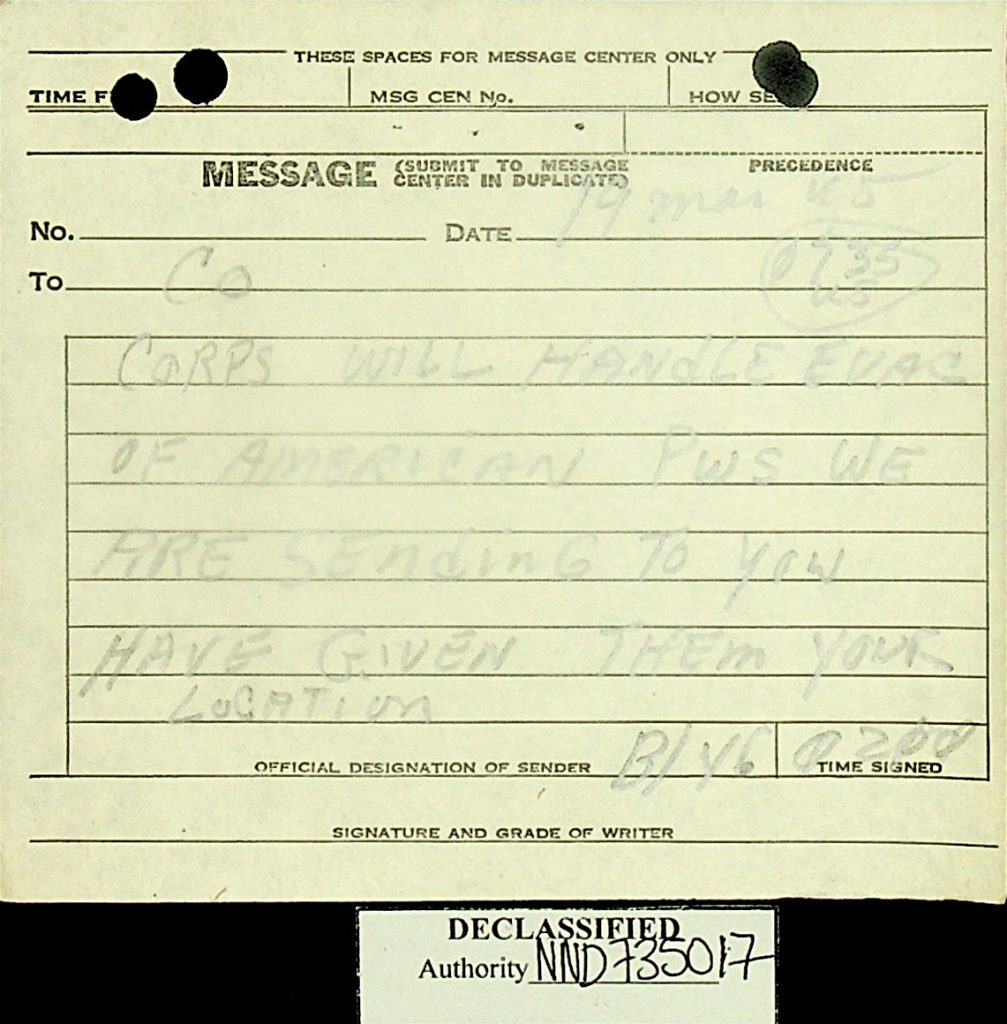 As we can see the plan is that the POWs will be evacuated from Company B to Company C. Company C was the Reserve Medical Company on March 19th 1945, and was located at the same location as Headquarters 46th AMB. We can also see that the Corps Surgeon is directing this process.

The reason for evacuating the POWs to Company C is that the Clearing Station of Company B needed to be empty as soon as possible so that new casualties could be admitted.

So why not evacuate them directly to a Field Hospital or Evacuation Hospital?

Well, the advance of the 4th AD had been quite rapid the previous days. When we look at this message from 18th March 1945 we can see that the 65th Field Hospital was rushing to move closer to the front and then to set up, working as an Evacuation Hospital, on the 19th March. it will be ready to receive casualties at 0800h (“190800), and can perform emergency surgery only, before that time. 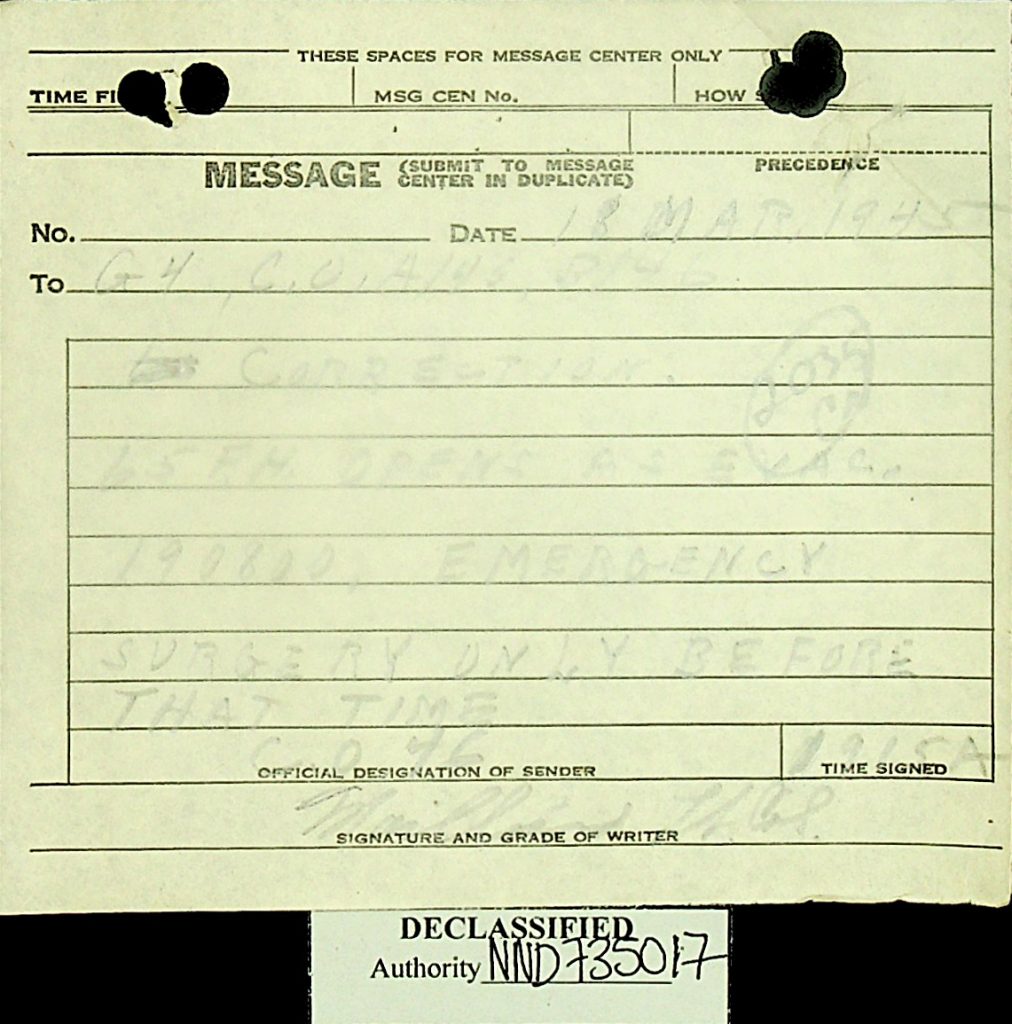 This map, taken from the Third Army After Action Report, shows us the location of the Third Army hospitals in March 1945. We can see that on March 18th the nearest hospital open to receive casualties was the 107th Evac Hosp located in Mayen. That is 60 miles from Bad Kreuznach! 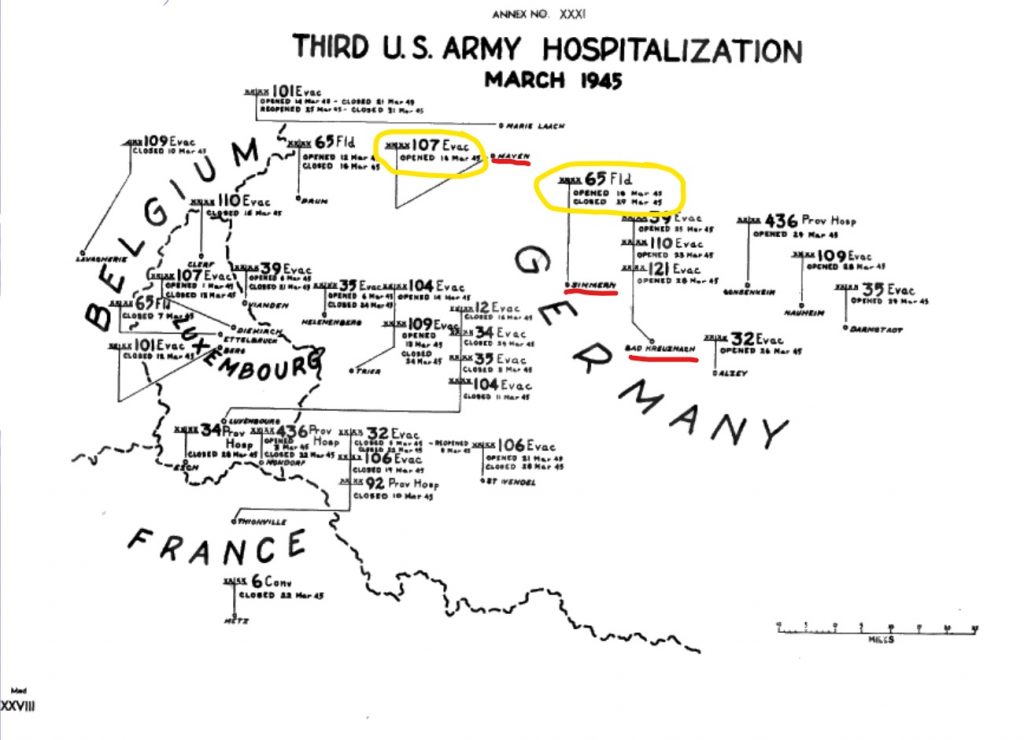 To do this the planned move of Company C, along with Headquarters, for this day to the area around Mandel was canceled. Headquarters, 46th AMB did move on the 19th of March 1945. It set up in a field waiting for the buildings it had picked as a bivouac location to be vacated by another unit. 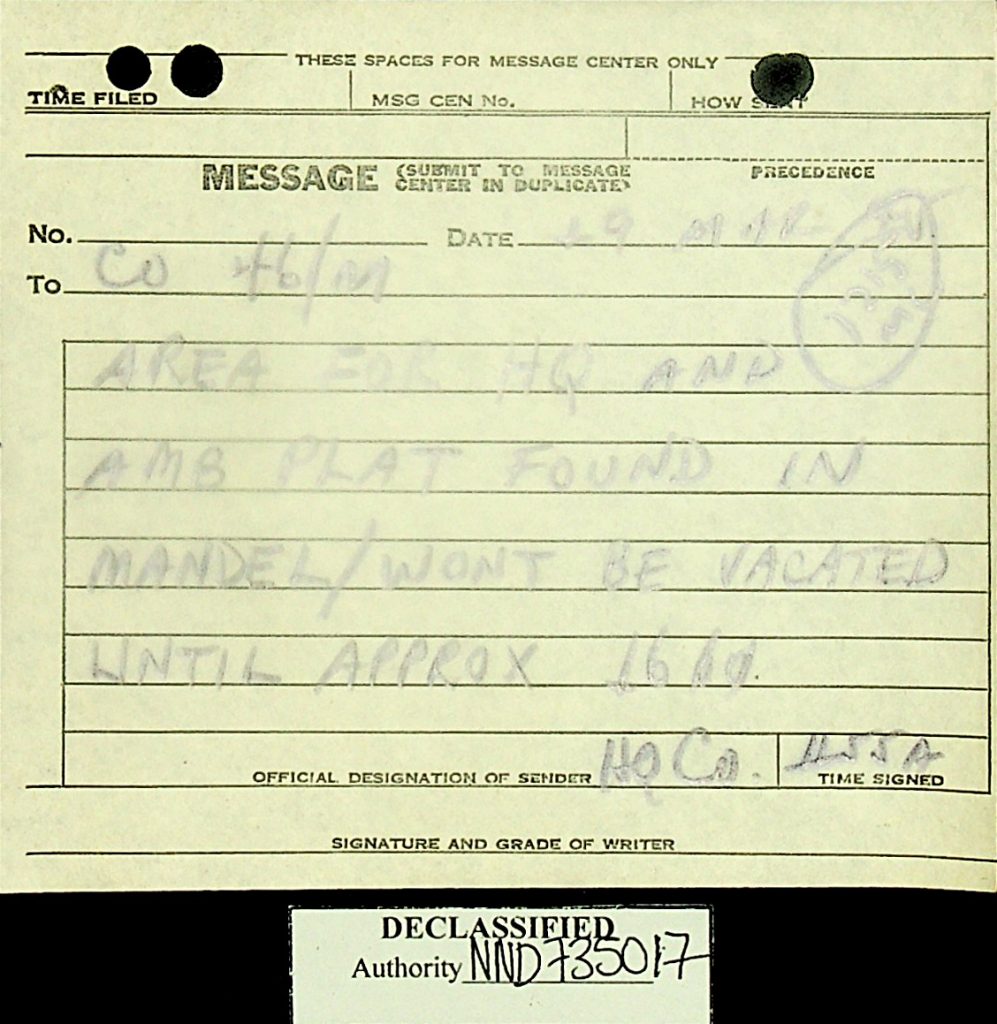 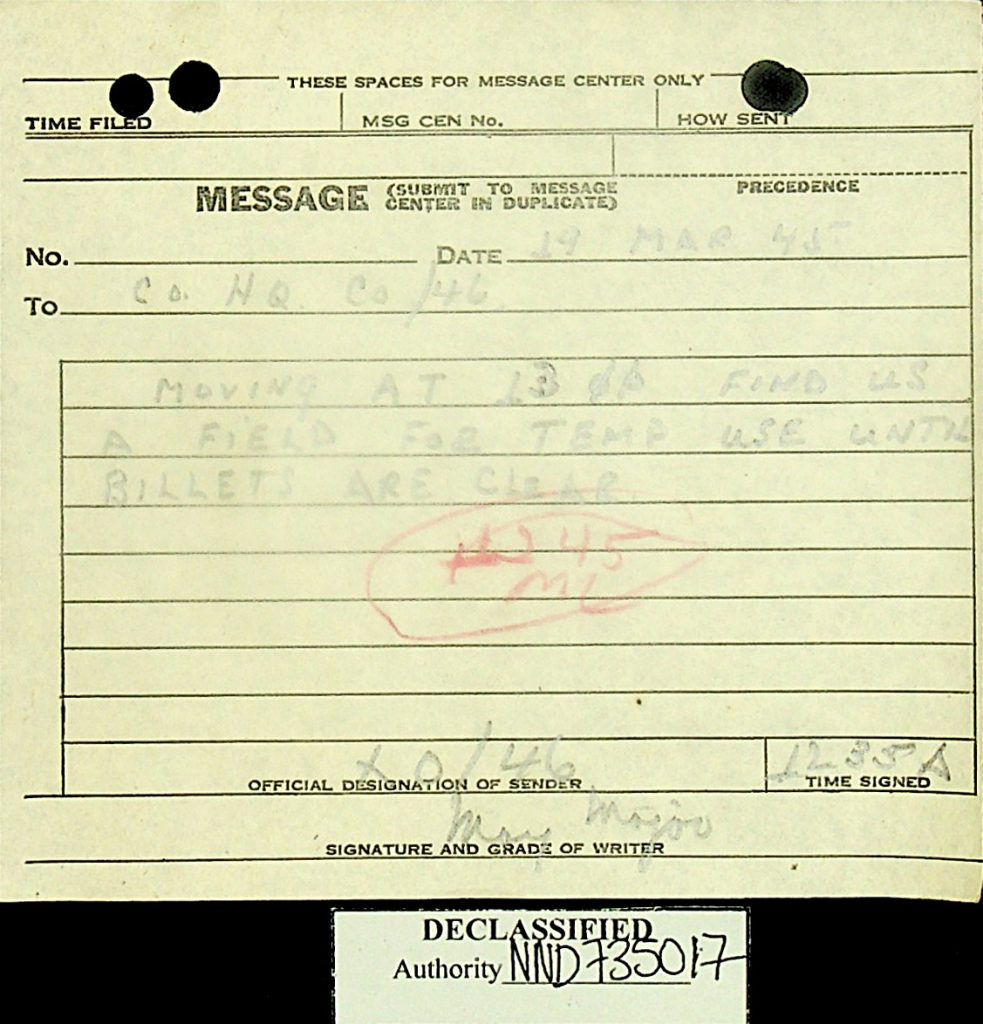 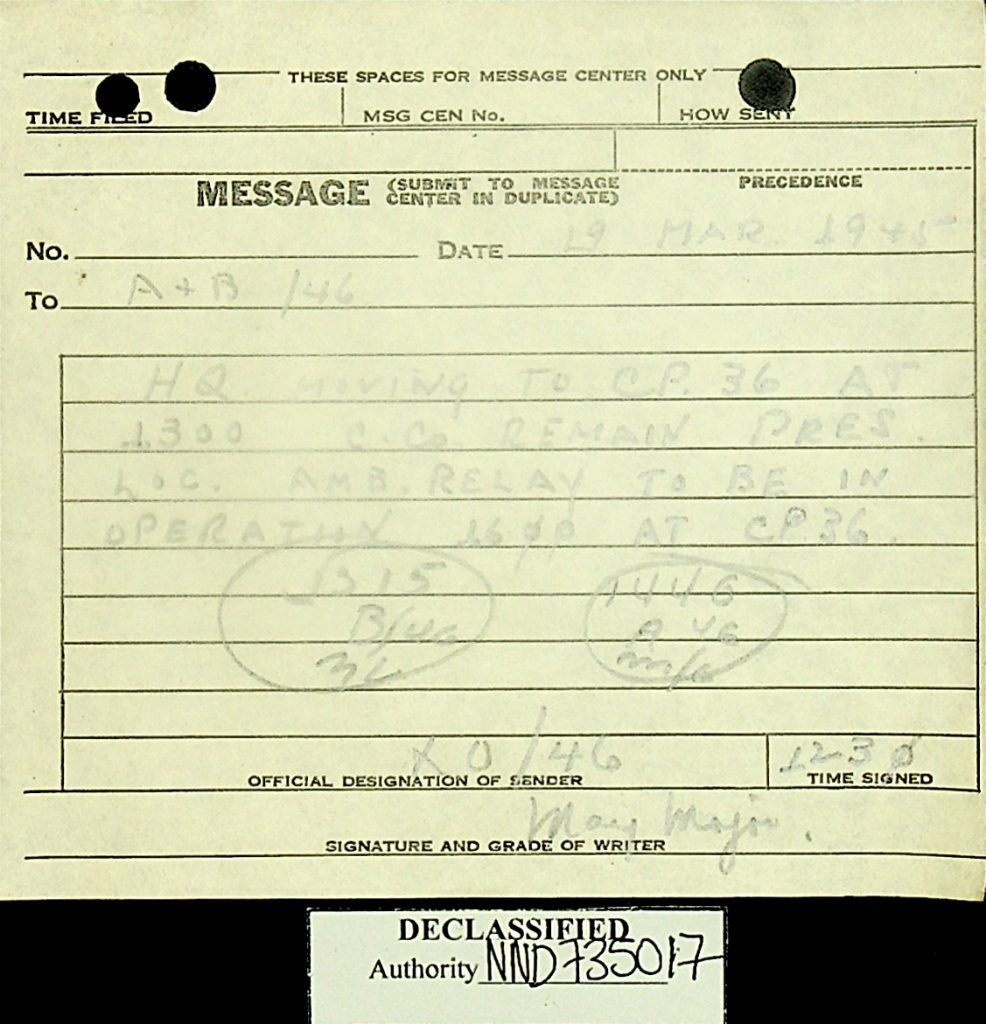 In the following messages, we can see a number of this happening. The evacuation form B/46 to C/46 is arranged using the ambulances of the 585th Ambulance Company. We can also see that C/46 is sending additional ambulances to C/46. They carry some much needed medical supplies to C/46. 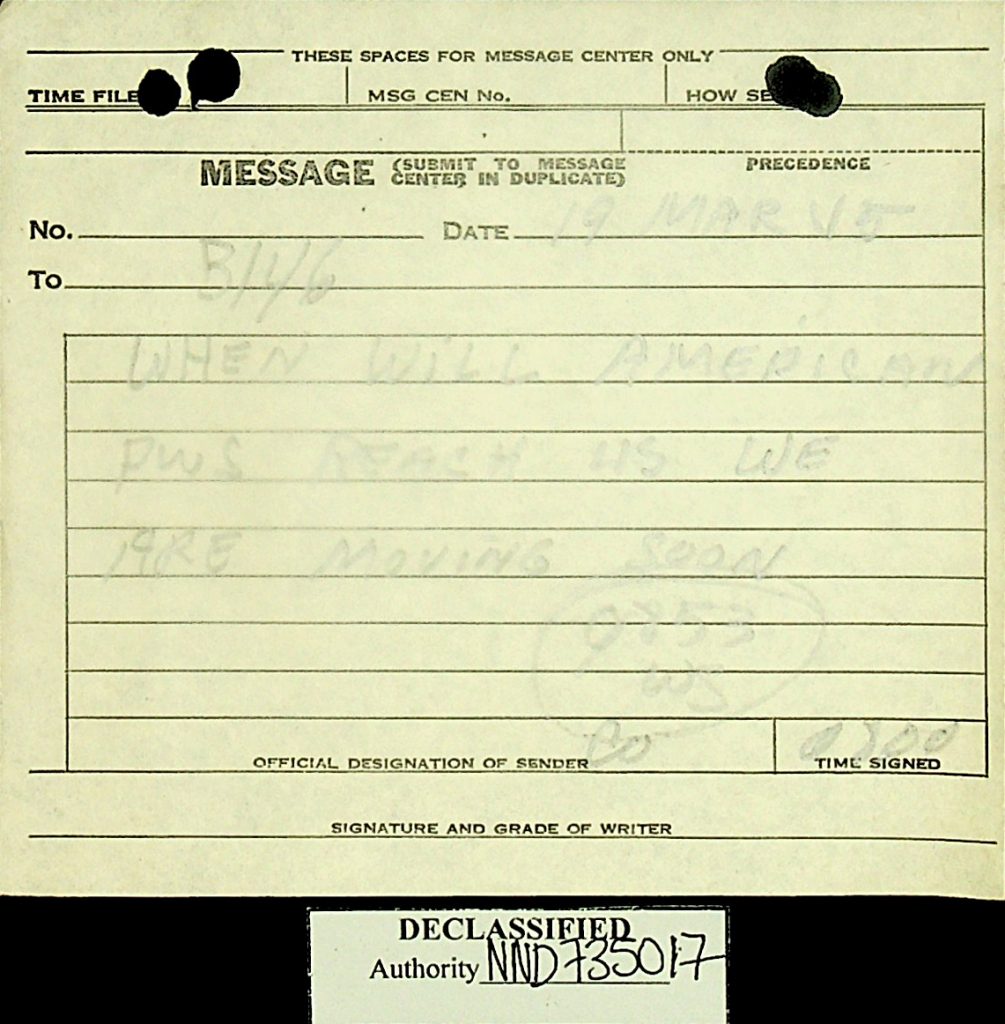 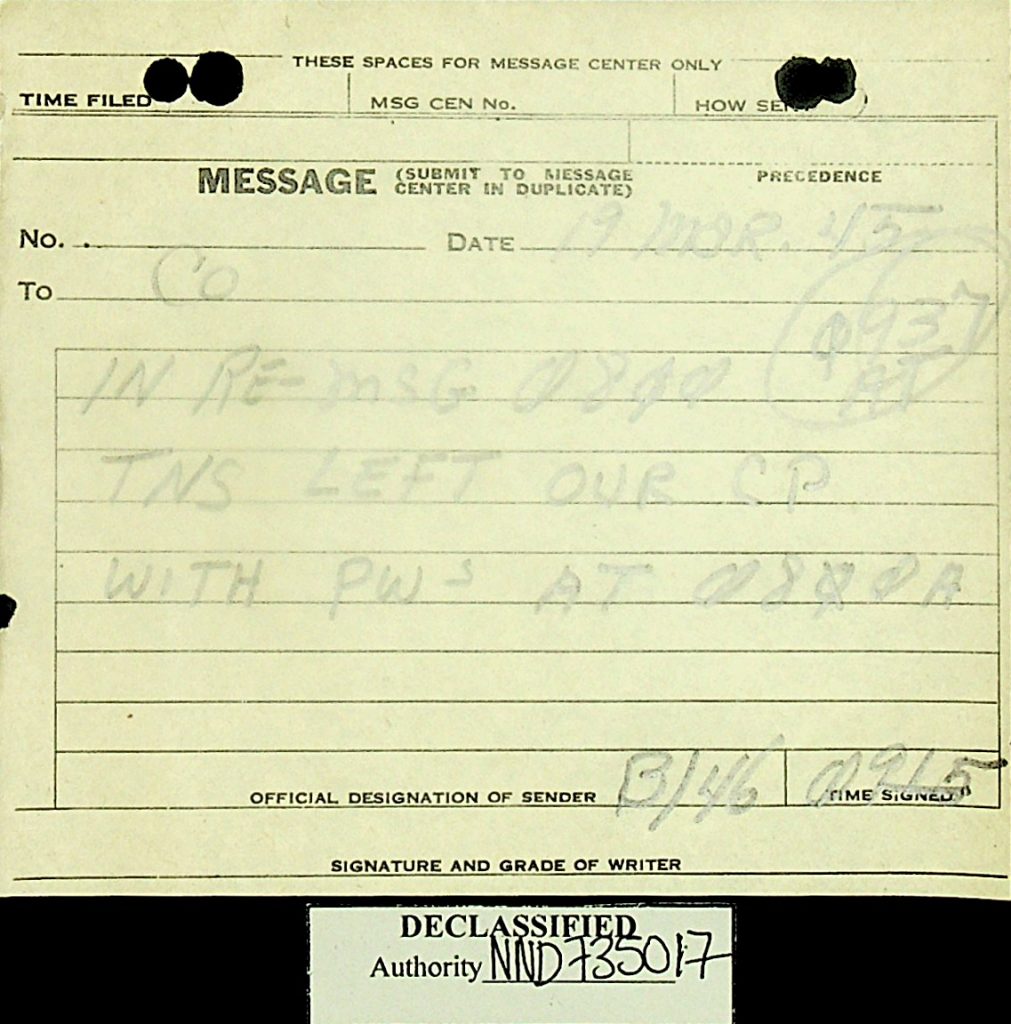 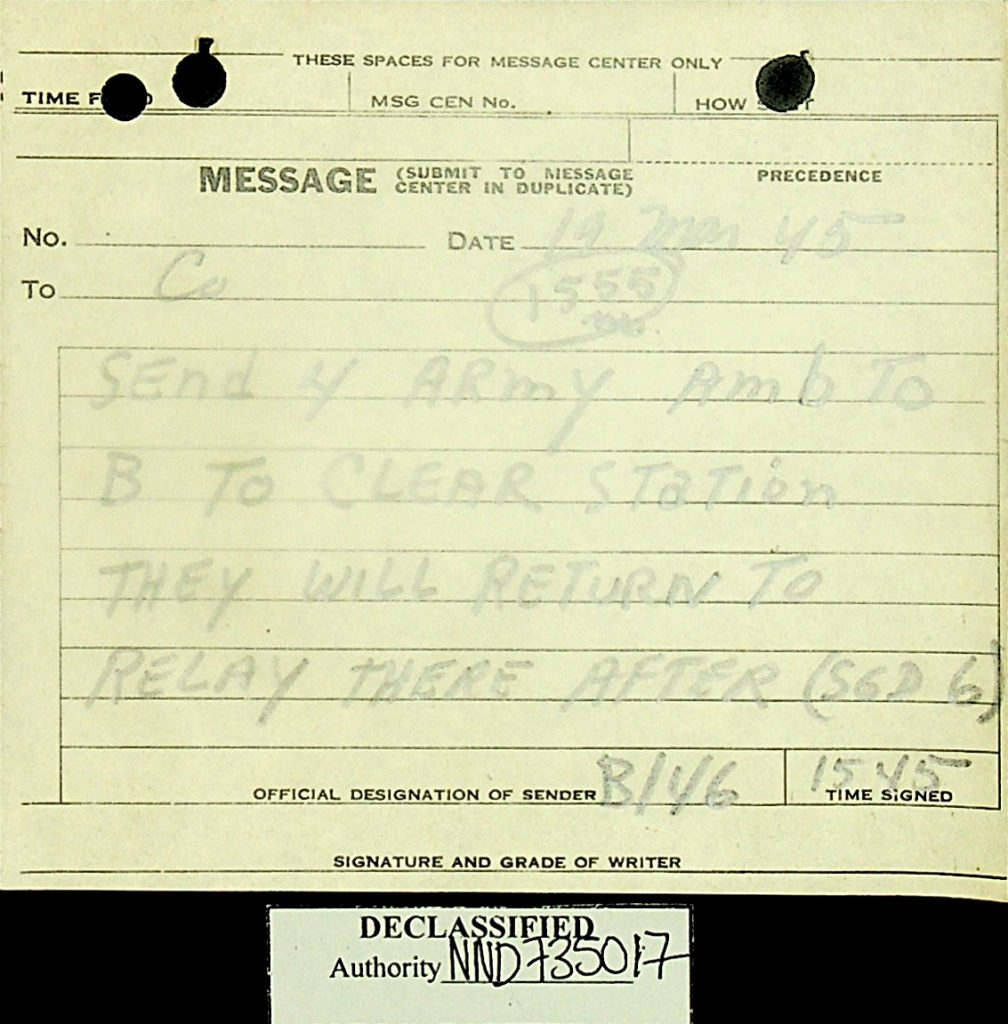 We can see the POWs being evacuated in ambulances and trucks. 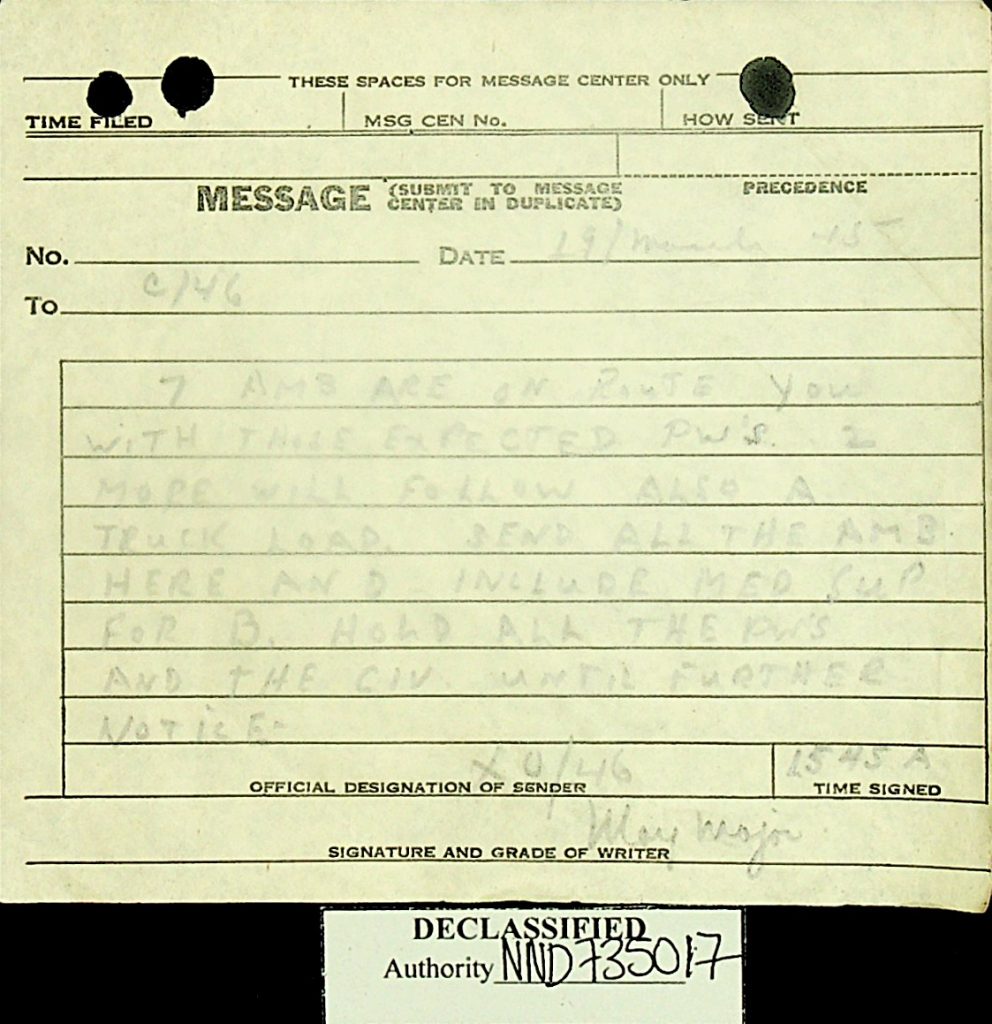 And finally, we see the message from C/46 that all POWs have been evacuated by 1913h from its Clearing Station to the 65th Field Hospital. And as a final act for the 46th AMB, Company C sends the Army Ambulances back to the front to have them ready when new casualties need to be evacuated. 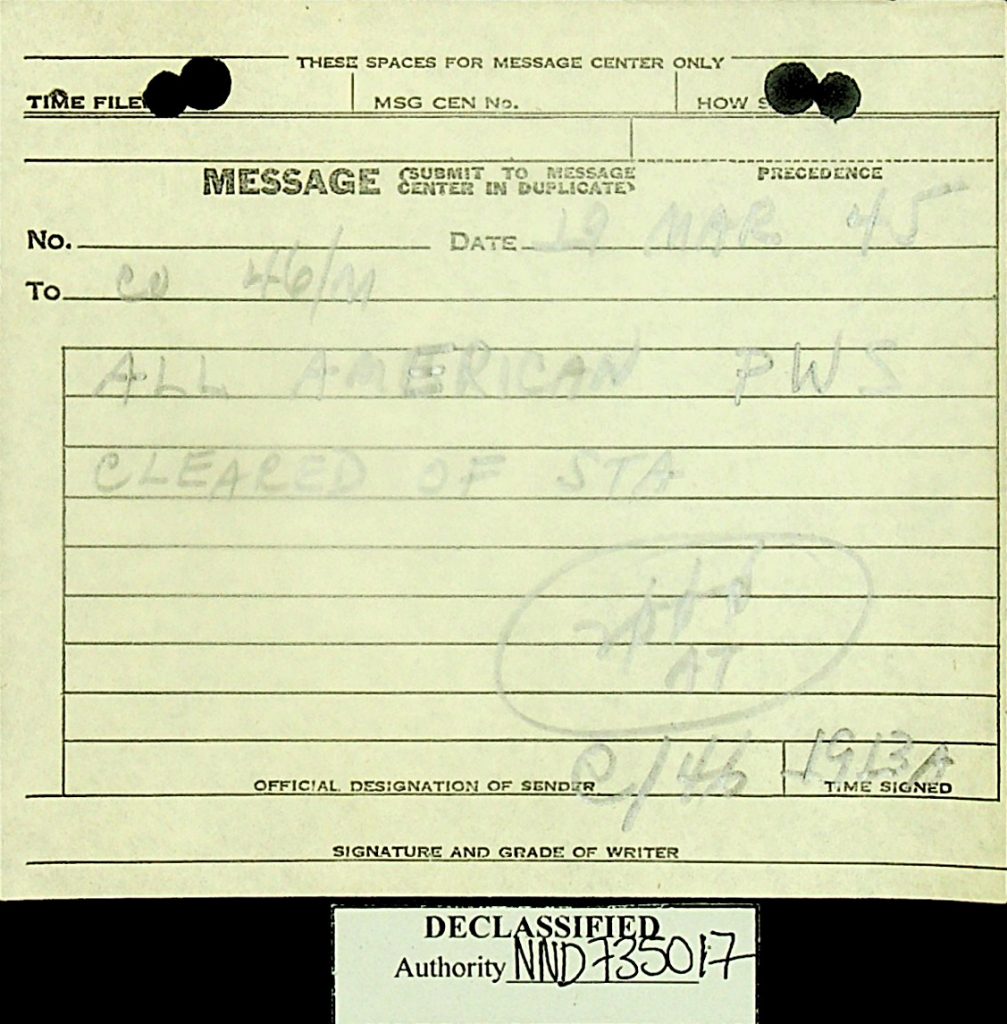 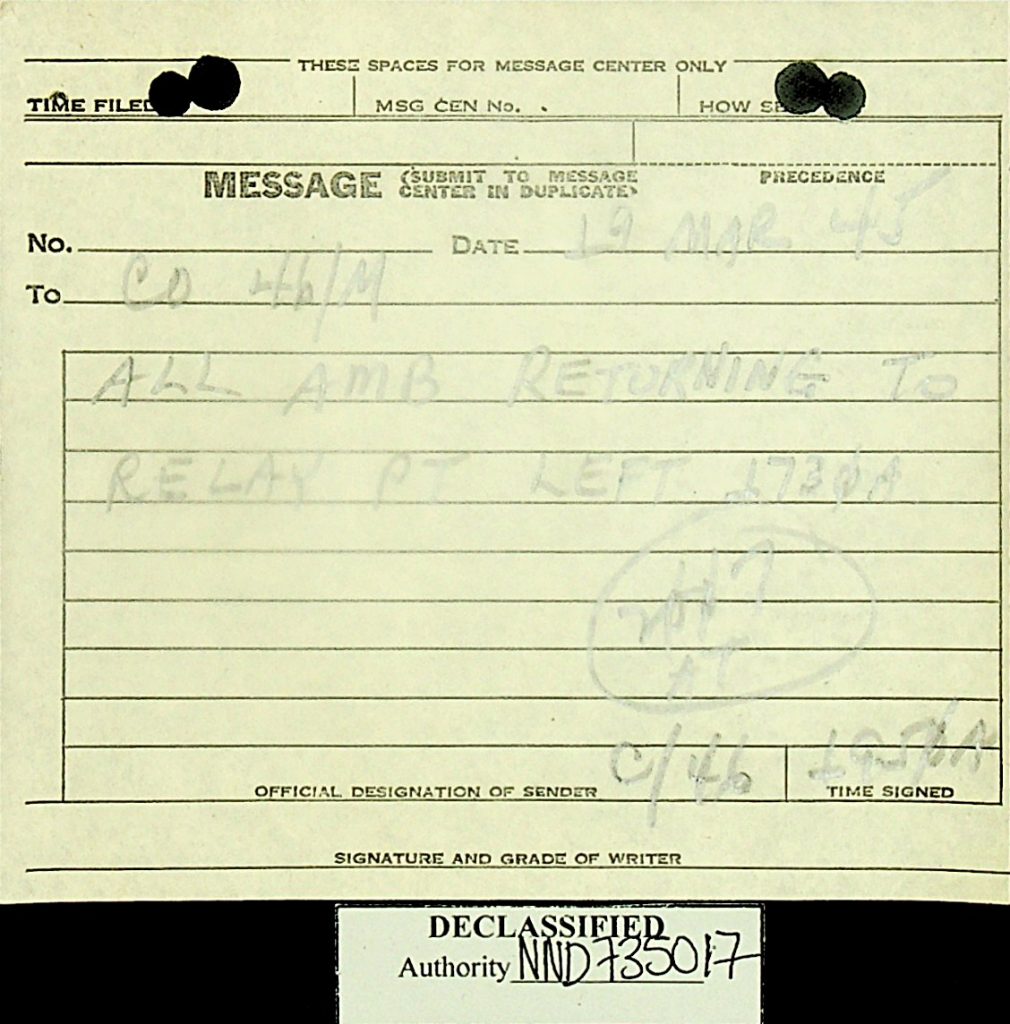 According to the book “Old man from the Repple Depple” by Thomas E. Oblinger, page 312 the 65th Field Hospital moved to Simmern from its previous location at Prum. It was set up in a 4-story school building on a hill. I believe it was the school building of the Herzog Johann Gymnasium on Am Flachsberg 6, Simmern.

So when we take a US Army Map of Bad Kreuznach from 1944 and add the locations of the medical companies we can see the evacuation route of these POWs. From the hospital in Bad Kreuznach, via the Medical Detachment of the 10th AIB; Company B, 46th AMB, and Company C, 46th AMB, to the 65th Field Hospital. 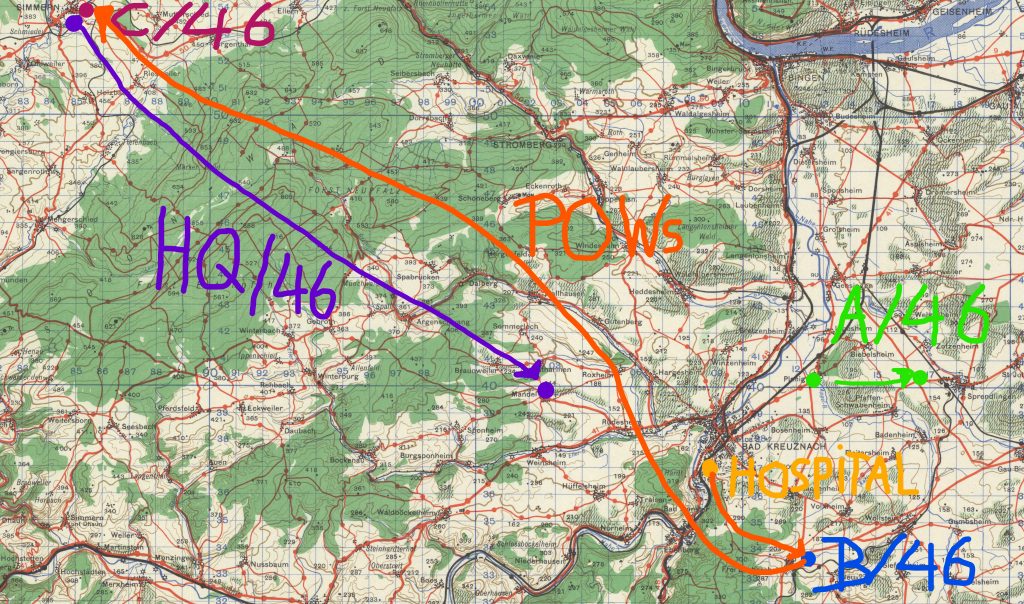 Now, you might be thinking: “okay, you have covered the organizational aspects of this story. But what about the human side of this story? What about the POWs themselves? What was their condition like at their liberation?“

Well, the truth is: the documents I have do not explicitly tell us that part of the story.

In this letter, he helps the medical personnel of the US Army with a guide on how to treat the malnourished Recovered Allied Military Personnel (RAMP) they were liberating.

Based on the need for this letter we might assume that perhaps some of the POWs were not in good health. In the message of 1545 it says that 7 ambulances were moving some of the POWs, but that some were transported by truck.  So, I think we can  conclude that not all were in bad shape.

I have found this photo of a group of POWs after their liberation. If their condition is a representation of the condition of some of “our” 50 POWs we can only imagine how weak they were. Given the fact that they were liberated from a hospital might tell us that they were in bad shape. 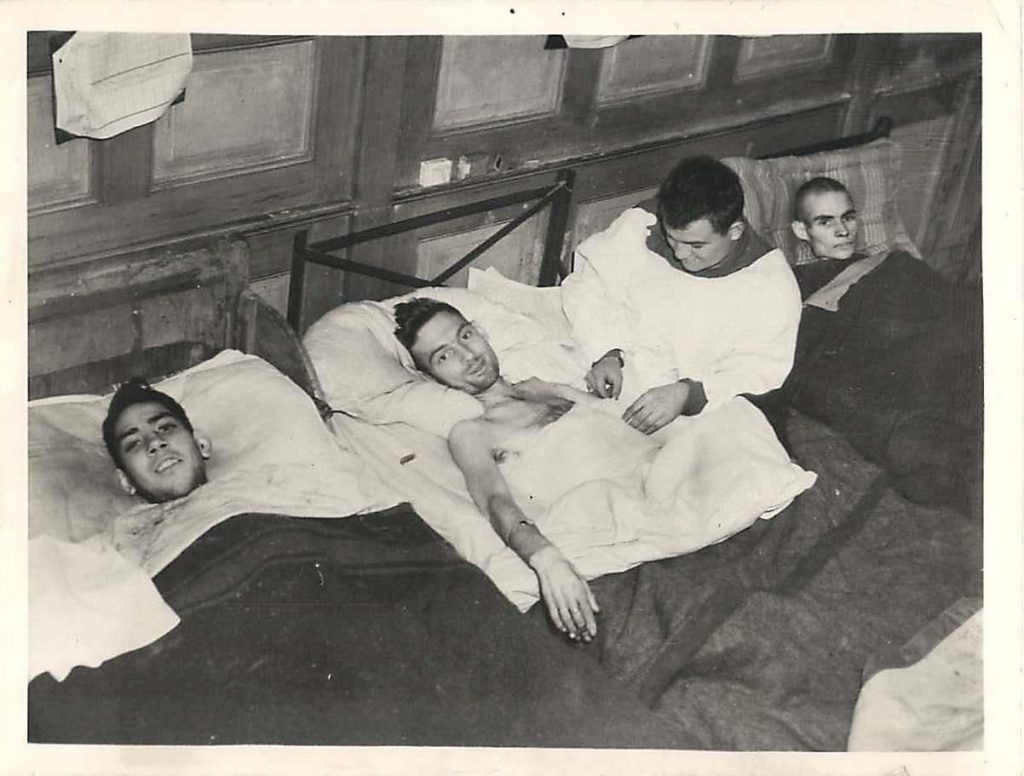 Before the war in Europe was over, and during its aftermath, the US Army medical personnel would be confronted with more horrible situations. You see, there certainly was another need for this letter.

I find it very interesting that the date of this letter is April 19th 1945. This means that the letter was dated after the liberation of the Ohrdruf and Buchenwald Concentration Camps. The 4th AD played a vital role in the liberation of both camps. With the experiences of liberating these camps, filled with severely malnourished victims of the Nazi regime, I would have thought that the title for this letter would have included these victims as well.  I honestly have no idea why they were not included. I do know that for many of the survivors of the camps the knowledge written in this letter proved to be lifesaving.